NFL Week 5 Recap: Eviscerations, surprises, and the moments you don’t want to define you

After 5 weeks, fortunes and failures have come into focus. After Sunday’s drubbing at home by division rivals the Philadelphia Eagles, the New York Giants are now 0-5 on the year. Through five games, the defense has given up at least 31 points to their opponents. That hasn’t been done in the NFL since the 1954 Chicago Cardinals.1 The last time the Giants went 0-5 was in 1987. That Giants team had an excuse for their impotence: they were on strike for three of those games. The quivering constipation of this year’s Giants has caught everyone by surprise. No one picked them to be bad much less one of the worst teams in the league. Tom Coughlin looks like he hasn’t taken a shit in weeks.

Despite the team’s winless record, all is not lost. A record of 2-3 currently puts you on the top of the NFC East. If they could mange to clear the blockage with a win Thursday at Chicago, they’d be right back in the thick of things in the division. That happening though seems doubtful. The meek may inherit the earth, but they don’t win football games. The Giants’ season is over. 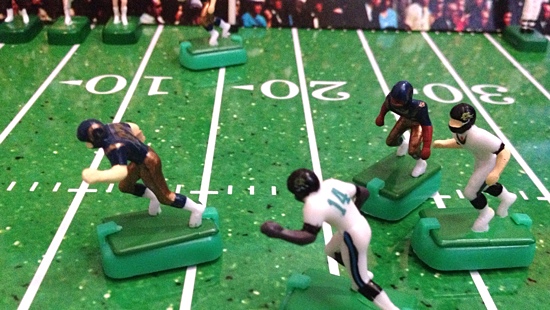 Matt Giordano returns an interception for 82-yard early in the first quarter of the Rams-Jaguars game. Rams quarterback Sam Bradford finished the day 19-of-34 for 222 yards, three touchdowns, and no interceptions.

As bad as the Giants are, they aren’t the worst team in the NFL. They are in the toilet bowl with the Tampa Bay Buccaneers, Pittsburgh Steelers, and the single worst team in the NFL: the Jacksonville Jaguars. The Giants, Bucs, and Steelers have all had fleeting moments of hope this year, but not the Jags. Their season has been a total failure. The 20 points they scored in Sunday’s loss to the Rams was the most they’ve scored in a game all year. Prior to that, they scored a total of 21 points in their first four games so I guess things are looking up, but that’s just turd polish. No amount of gleaning can change the mound of feces the Jaguars’ season has become.

The Steelers and Bucs had bye-week reprieves from their recent gridiron failures, but both appear to be doomed to finish their seasons in the cellars of their respective divisions. 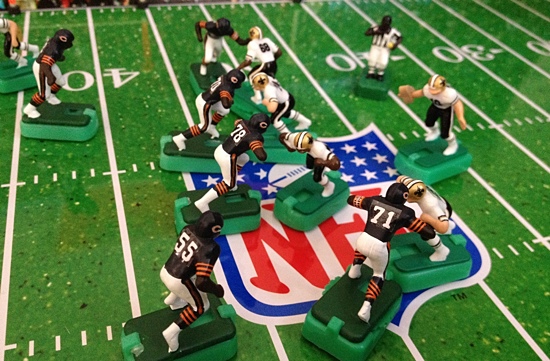 With head coach Sean Payton back at the helm after serving a year-long suspension for “Bountygate,” The Saints are 5-0 after Sunday’s 26-10 win at Chicago.

Finding good players is easy. Getting them to play as a team is another story. Casey Stengel

It’s amazing what a coach can do to for a team. Without head coach Sean Payton, the Saints started last season 1-4 and missed the playoffs. With Payton back calling the shots, the team is undefeated and are looking like Super Bowl contenders. The defense, under the direction of new defensive coordinator Rob Ryan, is back to their opportunistic ways (the team is +6 in the crucial turnover ratio). On the other side of the ball, quarterback Drew Brees is lighting up opposing defensives, completing 140 of his 201 attempts for 12 touchdowns and four interceptions. Through the first five games, he has a 107.4 quarterback rating (second only to Peyton Manning). The rushing game averages 72.5 yards a game. If these trends hold (and the team doesn’t have to travel to Seattle for a playoff game), don’t be surprised if the Saints end up representing the NFC in the Super Bowl. 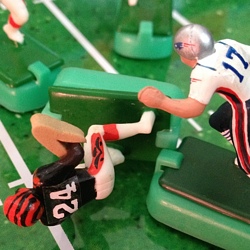 Adam Jones intercepts Tom Brady’s pass at the Cincinnati 3-yard line to seal the Bengals’ victory over the Patriots with 16 seconds left in the 4th quarter.

In their rain-soaked victory over the Patriots, the Bengals kept New England out of the end zone for the first time since their 16-9 loss to the Jets on September 20, 2009, breaking Tom Brady’s 52-game streak of throwing at least one touchdown pass. Beating the Patriots in itself is cause for celebration, but to beat them the way the Bengals did–without playing their best offensive game (Andy Dalton went 10-of-27 for 212 yards, no touchdowns and a pick)–legitimizes the team as an actual contender. Defensive coordinator Mike Zimmer had the Bengals defense harassing Tom Brady all day. They sacked him on his first pass attempt of the game (and three more times after that), and the 3-time Super Bowl-winning quarterback finished the day 18-of-38 for 197 yards with an interception for a Tony Banksesque passer rating of 52.2.

While the Bengals’ offensive is still a work in progress, the defense is keeping them in games. In their Week 3 road victory at Lambeau against the Packers, the defense managed to hold on despite allowing the Packers to score 30 unanswered points (the last time a team won a game after giving up 30 straight points was Sept. 12, 1999, when Dallas rallied to beat Washington 41-35 in overtime after the Redskins scored 32 unanswered points). As they say, defense wins championships, and Mike Zimmer has his squad playing like champions. If the offensive can average 21 points a game, this team is going to be dangerous. 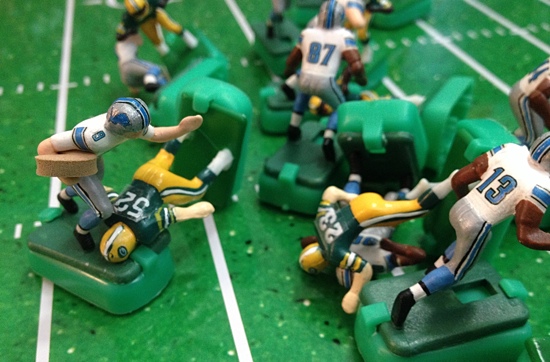 The Packers sacked Lions quarterback Mark Stafford five times and kept Detroit out of the end zone until late in the 4th quarter.

The Packers beat division rivals the Detriot Lions for the 23rd straight time at Lambeau on the strength of their defensive effort. The Lions were without their principle playmaker, wide receiver Calvin Johnson, so the Packers centered in on running back Reggie Bush, holding him to 44 yards on 13 carries and four catches for 25 yards. They held Detroit to 286 yards for the day. The Packers’ offense only managed one touchdown, but kicker Mason Crosby’s five field goals was the difference in this battle of defensive wills. The Packers are one game behind Detroit and Chicago in the standings, and linebacker Clay Matthews is out for a month with a broken thumb. If they can muster this type of suffocating defensive effort with regularity, they’ll once again be hosting playoff games at Lambeau when the season ends. 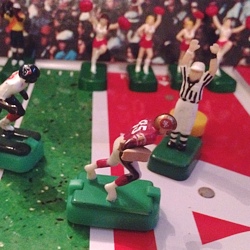 Tight end Vernon Davis scores on a 64-yard catch and run from Colin Kaepernick in the 4th quarter of the 49ers’ 34-3 thrashing of the Houston Texans.

After five games, the 49ers, Packers, Seahawks, and Saints are the best teams in the NFC. The Niners made chump change of the Houston Texans and even though Seattle lost their first game of the season falling to Colts 34-28 in a tight battle, they have a clear advantage over everyone if playoff games are played in Seattle (if that happens, the Seahawks are going to the Super Bowl). The Falcons are always on the cusp, but at 1-4 after their heartbreaking 28-30 loss to the Jets, the Saints have them under a barrel even if they do manage to rattle off some wins. The Bears, Vikings, and whoever wins the NFC East (the Redskins) will all be dispatched in the first round of the playoffs. 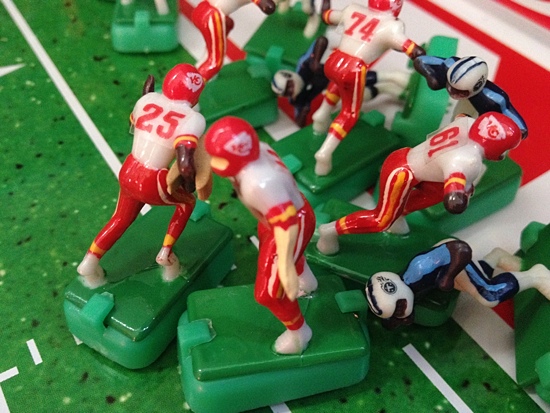 Jamal Charles’s 1-yard touchdown run put the Chiefs up 19-17 over the Titans with 6:23 left in the 4th quarter.

My favorite undefeated team is the Kansas City Chiefs. After years of posting losing records, first-year coach Andy Reid has the long-suffering franchise off to their best start since 2003 when the Dick Vermeil-coached team won their first nine games. The defense forced three turnovers and turned them into 13 points in Sunday’s game at Tennessee. On offense, the combination of Jamal Charles on the ground (108 yards on 22 carries and a touchdown) and Alex Smith’s careful game management (20-39 for 245 yards, no TD’s and a pick), the Chiefs are no longer one of the league’s least capable thanks to Reid. With this week’s game at home against the surprising, 2-3 Raiders (who dispatched division rivals the San Diego Chargers 27-17 on Sunday night), a victory will keep Kansas City neck and neck with the undefeated Denver Broncos. 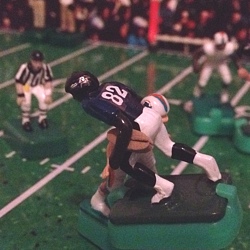 Other pleasant surprises in the AFC this year are the Browns, Bills, and the Dolphins. Miami lost 23-26 at home to the retooled, 3-2 Ravens on Sunday, but quarterback Ryan Tannehill is giving hope to the Dolphin faithful. It was the team’s second straight loss and the 18 sacks the offensive line has given up (the most in the NFL) has been the reason. Tannehill was under pressure all day, and Baltimore sacked him six times (three by Terrell Suggs). Despite this, the Dolphins made a game of it. Trailing 23-13 with 10 minutes left in the game, they scored twice in 95 seconds (a field goal followed by a pick 6 by Reshad Jones) to tie the score at 23 before Justin Tucker’s 44-yard field goal with 1:46 left in the game sealed the Baltimore victory. Going into their bye week, they are a respectable 3-2. 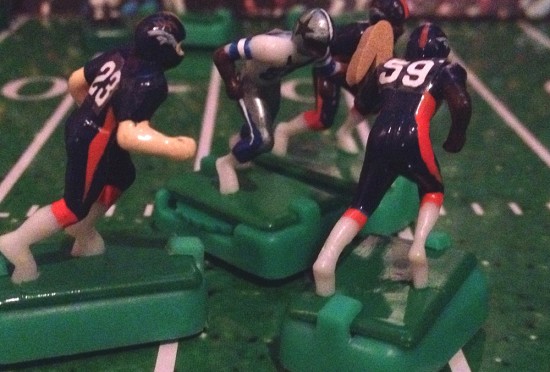 In the animal kingdom, the rule is, eat or be eaten; in the human kingdom, define or be defined. Thomas Szasz

Even a diehard Redskins fan like myself feels sorry for Tony Romo. The man is defined not by his successes, but by his failures. In virtually every pivotal moment of his career, Romo finds a way to make the play that wins the game for the other team. Last year, his season ended with a three interception, turd-laying in Washington with a division title and a playoff birth on the line.

In Sunday’s loss to the blazing-hot Broncos, Romo was having a banner day. His 506 yards of passing broke Don Meredith’s franchise record of 460 yards set on November 10, 1963 in San Francisco (the Cowboys lost 24-31), and he became the fifth quarterback in NFL history to pass for at least 500 yards and five touchdowns in a game.2 With the score tied 48-48 and 2:39 left in the 4th, the Cowboys had the ball and a chance to win the game. On 2nd-and-16 on their own 14, Romo did what he always does when an important game is on the line: he failed.

The interception by Danny Trevathan3 set up Matt Prater’s game winning field goal as time expired. As the camera showed Romo sitting by himself as Manning ran time out before the kick, you got the feeling that you were looking at a man that’s been cursed to forever snatch defeat from the jaws of victory.

Here are the scores for rest of the games: 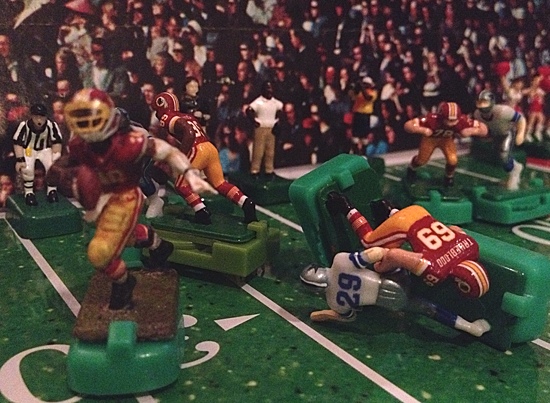 With a win against the Cowboys this Sunday, the Redskins would improve their record to 2-3 for the year.

I embrace my rival, but only to strangle him. Jean Racine

This week, the Redskins travel to Dallas to take on the Cowboys. Despite being 1-3, the Skins come off their bye week only a half-game behind the 2-3 Cowboys and Eagles in the NFC East. With the division up for grabs, this game is of vital importance for both teams. Despite Sunday’s loss, the Cowboys traded punches with the best team in the league and almost won. The Redskins got their first win of the season against a diminished Oakland squad and are ready to continue their winning ways. Whoever wins this game, wins the division.