How the cookie crumbled in week two of the NFL Season. 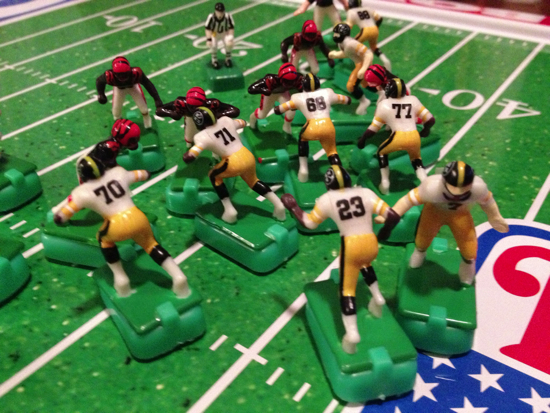 Ben Roethlisberger hands off to Isaac Redman for a short gain.

The Steelers have scored a total of two touchdowns this season. Or, if you prefer, one for each of the games they’ve played so far. The defense tries, but the offense is putrid (they failed to get a first down on seven of their 12 possessions and turned the ball over twice). The Bengals, on the other hand, looked sharp. They ran up 407 yards of offense and squashed everything Roethlisberger attempted. With the Steelers flailing, the Ravens rebuilding, and the Browns letting their season swirl down the toilet bowl yet again, this could be the year the Bengals take the division. 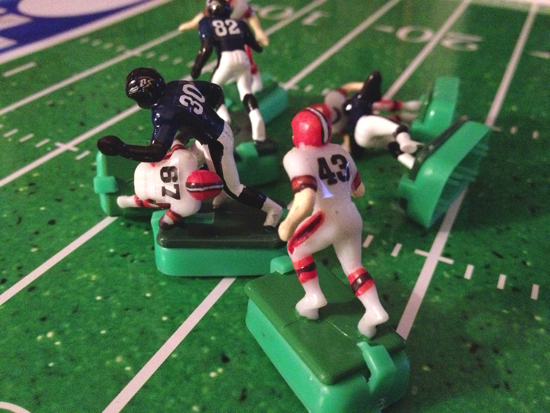 Ravens rookie running back Bernard Pierce scored the first touchdown of the game with 5:13 left in the third quarter.

Whenever AFC North teams play one another, it always brings out the ugly in the both of them. Though they did try to make a game of it, the Browns couldn’t get the ball in the end zone scoring all their points on first-half field goals. Pitiful. In their 11th straight loss to the Ravens, they went for 4-15 on third down, and quarterback Brandon Weeden was sacked five times (he left the game in the 4th quarter with a thumb injury). In two games, they have scored one touchdown. Like every other year in recent memory, the Browns suck.

What a waste of a great uniform. 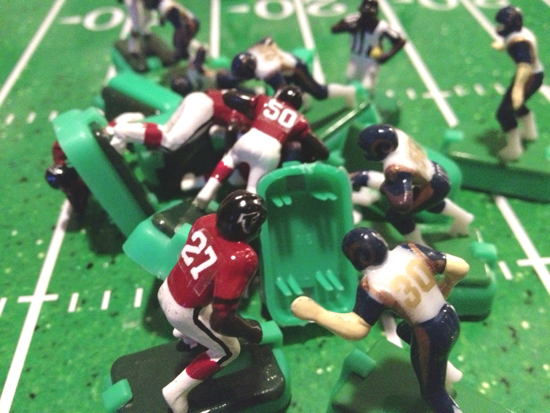 Daryl Richardson runs for a 1-yard gain in the 1st quarter of the Rams loss to the Falcons.

Now this was fun to watch. 814 yards of combined offense produced two field goals and seven touchdowns. It wasn’t all offense either. Osi Umenyiora’s 68-yard interception return for a touchdown put the Rams in a 21-0 hole early in the second quarter. Though the Rams did fight back making it 17-24 early in the 4th quarter on a 3-yard Sam Bradford touchdown pass to Austin Pettis. The pick six proved to be the most important play of the game. 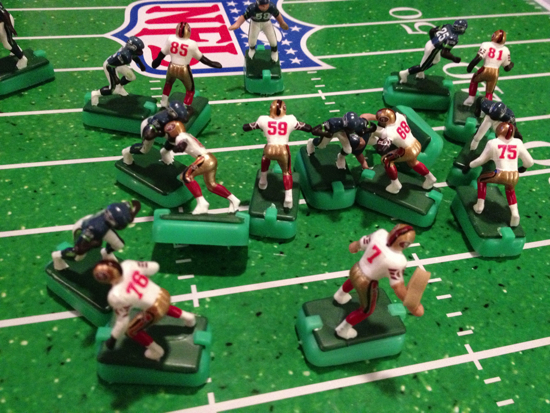 49ers quarterback Colin Kaepernick went 13-28 for 127 yards and threw three picks in his worst passing game as a starter in Sunday’s night blow out loss to the Seahawks.

The only chance teams have to beat the Seahawks is to play them outside of Seattle. No other team in the league can claim a home field advantage like they do (according to the Guinness Book of World Records, the noise level at the game (131.9 decibels) set a world record for crowd noise breaking the previous record of 131.7 decibels set at a soccer match in Istanbul, Turkey two years ago). Knowing this, no one should be surprised that this much-hyped Sunday night game turned out to be a lopsided blow out. The Niners are a good team, one of the best in the league, but they couldn’t score more than a field goal against the Seahawks. Frank Gore was held to 16 yards on nine carries. Anquan Boldin, the team’s prized free agent acquisition who torched the Packers for 208 yards in last week’s game, didn’t get his first (and only) catch until the 4th quarter. The whole team played like they couldn’t hear themselves think. That’s because they couldn’t. 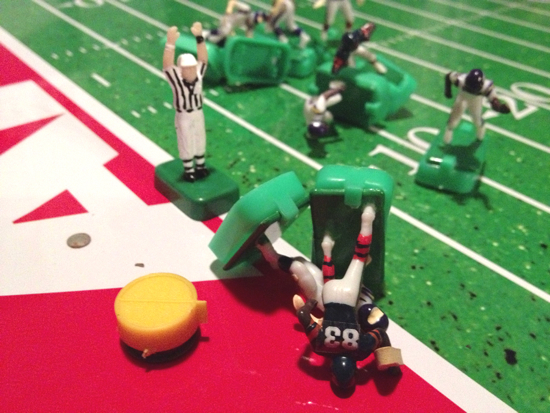 This one came fast and furious. Despite his three turnovers (two picks and a fumble that got scooped up and taken for 61-yard touchdown return by Vikings DE Brian Robison in the second quarter), Jay Cutler completed 28-39 for 290 yards and three touchdowns with the last one coming in the game’s closing seconds. It’s games like this why people like football. 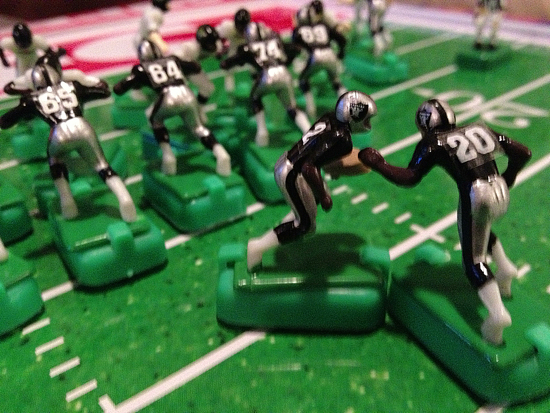 Terrelle Pryor hands off to Darren McFadden who ran for 129 of Oakland’s 226 total yards in their victory over Jacksonville.

A amateurish game riddled with penalties, miscues, and ineptitudes, this battle of the young and restless was won by the Oakland Raiders. That made me happy. Like the Browns, I hate to see teams with classic uniforms suck. They still sorta suck, but any glimmer of hope for the silver and black to escape from the purgatory of suckdom should be cheered.

I have no love for the Jaguars though. Not with those helmets. 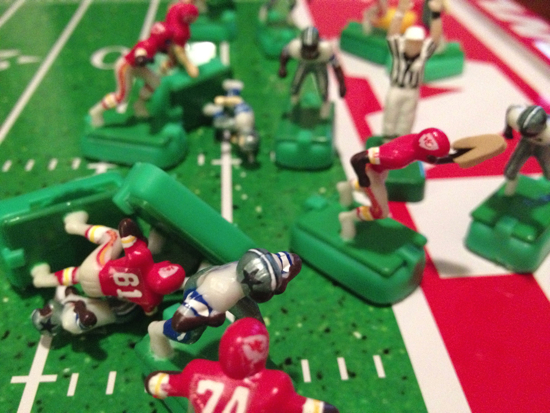 Dwayne Bowe catches a 12-yard touchdown pass from Alex Smith to put the Chiefs ahead of the Cowboys 14-13 late in the 3rd quarter.

Andy Reid’s Chiefs played mistake-free ball against the Cowboys. And when you play mistake free ball, 9.99 times out of 10, you win the game. And that’s what they did. The Cowboys helped of course, but instead of being the team that finds a way to lose, they were the team that did all the things to win. That hasn’t happened in years. And if Oakland can hold up their end of the bargain, an old rivalry would be revitalized. Here’s to the hope that they do, if for no other reason than I think the red and white and silver and black look great together. 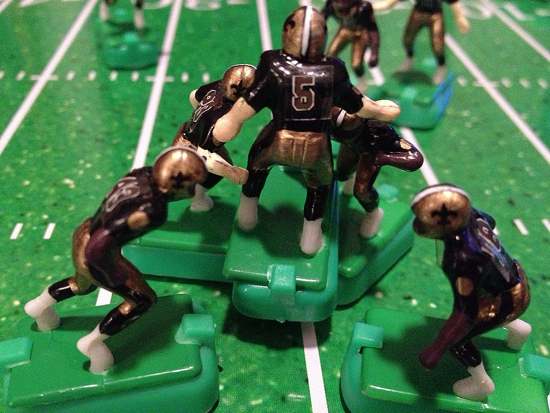 Two games, two crushing last second losses for the Buccaneers. The defense harassed Drew Brees, sacking him four times and keeping him off balance all day (linebacker Mason Foster¹s 85-yard interception return for a touchdown put the Bucs up 14-13 early in the 4th quarter), but their offense, led by dead man walking Josh Freeman (9-22 for 125 yards and a touchdown), couldn’t generate enough mojo to put the Saints down when they
had the chance. Tampa Bay finished the game with 10 penalties for 118 yards, including one for an illegal formation that wiped out a 73-yard TD pass to Vincent Jackson. 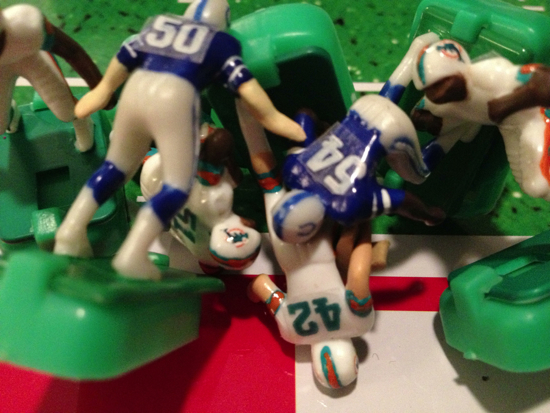 Charles Clay’s 1-yard TD run put the the Dolphins up for good with 4:40 left in the 4th quarter.

This one went down to the wire too, but Andrew Luck, who has engineered eight fourth-quarter comebacks in his first 18 games, couldn’t save the day like Brees did for the Saints . The Miami offensive scored 14 points in the first quarter for the first time since 2011, and quarterback Ryan Tannehill managed the game nicely going 23-34 for 319 yards and a touchdown. 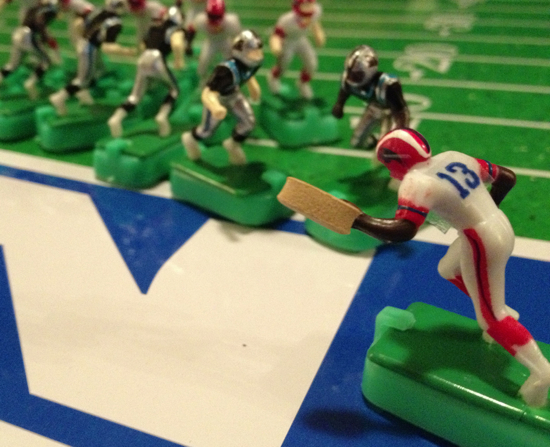 EJ Manuel throws the winning touchdown pass to a wide open Stevie Johnson with two seconds left in the game.

This was another feel good game of the week for perennial losers. The Bills squeaked out a victory in the game’s final moments to give their long suffering fans something to cheer about for a change. The Panthers, on the other hand, can’t get a break. Coming off a 12-7 loss to Seattle, the team dropped to 2-14 in games decided by seven points or less in two-plus seasons under coach Ron Rivera. The once beaming smiles of Cam Newton that defined his rookie campaign are now replaced by looks of bitter disappointment. Try as he might, Superman looks positively human these days.

Here’s how the cookie crumbled in the rest of the NFL games in week 2. 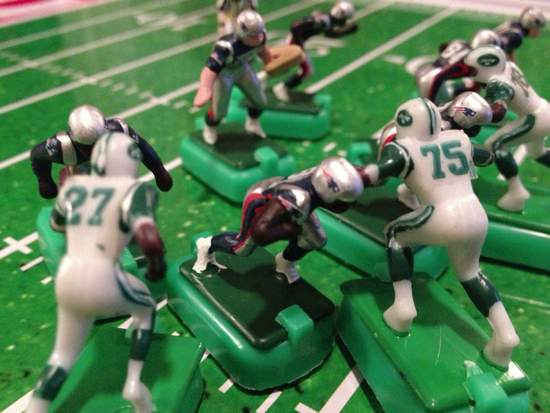 Tom Brady overcame a sluggish performance to led the Patriots to a 13-10 victory over the Jets.

If patience is worth anything, it must endure to the end of time. And a living faith will last in the midst of the blackest storm. Mahatma Gandhi 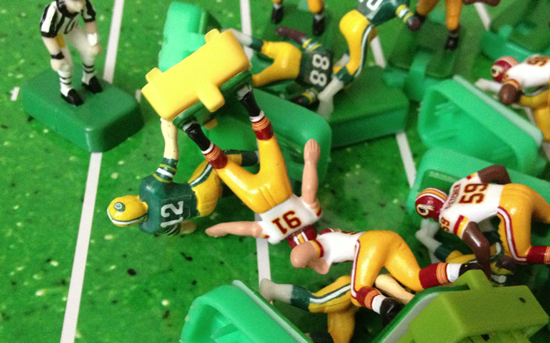 A rare moment of glory for the Redskins faithful came when Ryan Kerrigan sacked Aaron Rodgers for a 9-yard loss on the Packers opening drive.

I know I have been a doomsayer about the Redskins during this young season, but a couple of days removed from their loss to the Packers, I have rebuilt my supply of faith that this week they will record their first win of the season. I can’t base this belief on anything they’ve showed on the field, but like all true believers, the sad reality of what they’ve done on the field has been replaced by my desire to mold reality to my liking. It is my hope that next week, I can log a cheery report filled with giddy optimism for the Skins’ future instead of lamenting another loss. Either way, I’ll be watching and rooting for them no matter what the outcome.