How much does Richmond owe Washington’s NFL team?

The City has a deal with Washington’s NFL team, and the money we’ve made from the training camp hasn’t been enough to cover our end of it. Here’s a handy and sobering graph! It’s nearly August, and that means professional footballers from the nation’s capital will soon fill the state’s capital (that’s us!), cramming themselves into the normal-sized-person chairs of restaurants and bars as NFL training camp season begins. Now in its third year, Richmond’s Training Camp has already twice fallen short of its $500,000 in required “local contributions.” This past February, the city stroked a $285,538 check to Washington’s NFL team to make up the difference.

There’s certainly not enough data yet to make statements about trends, but we can look at those local contributions over the past two years, and what’s left on Richmond’s balance sheet for the coming five years. 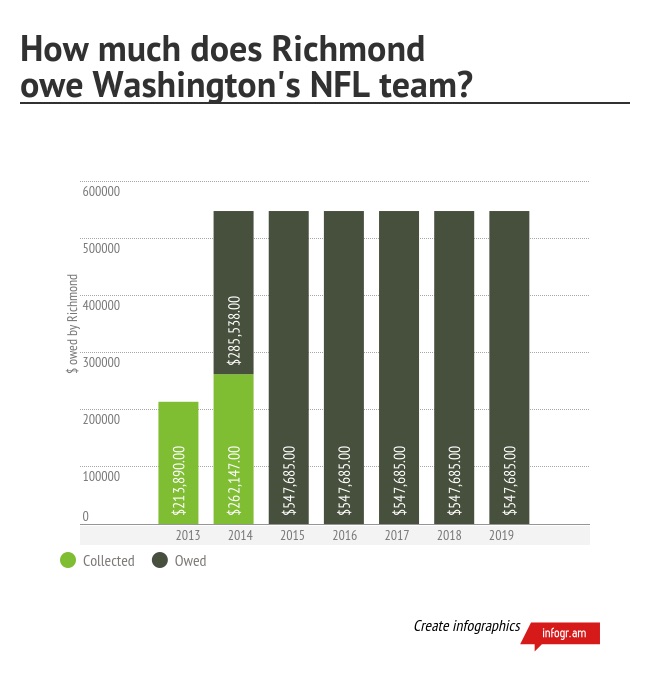 A couple of notes: Richmond was on the hook for $500,000 for each of the seven years of the contract. The shortfall from the first year ($286,110) was spread across the remaining years, making each annual obligation moving forward $547,685. The city can count some of its expenses and in-kind contributions towards the $500,000 (e.g. volunteer hours). These numbers come straight from the Economic Development Authority of the City of Richmond (terrible website alert).

This past February, Graham Moomaw at the RTD penned a great recap with a lot more details. And you can find the full schedule training camp schedule here–things kick off tomorrow.