Baseball in April is fresh and awkward–hands and bats are cold, the players are all new to each other, good teams are bad, and it’s early enough yet that the bad teams still have hope. The Richmond Flying Squirrels had a decent first month. Their twelve wins and twelve losses are good enough for 3rd place in the Western Division, behind the Akron Aeros and Harrisburg Senators. They’ve played break-even baseball against four teams with a cumulative winning record (Bowie Baysocks, New Britain Rock Cats, Reading Phillies, Altoona Curve), and will get a crack at both the Aeros and Senators over the next few weeks. The Squirrels’ longest winning and losing streaks are both three games, and they haven’t swept or been swept. 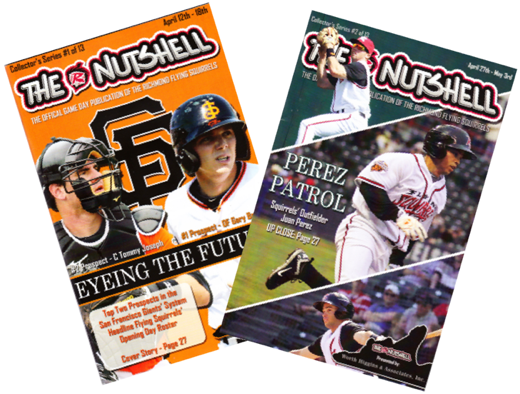 The pitching staff has hasn’t gelled yet, posting the 3rd-worst ERA and 6th-worst WHIP in the 12-team league. There are signs of what these young arms can bring, though. Chris Heston leads the starting rotation with an ERA of 1.21 in 29.2 innings over five starts. Relief pitcher Brett Bochy has a perfect 0.00 ERA in 12.2 innings over eight games, with three walks and 10 strikeouts. Austin Fleet is right behind him, with a 1.86 ERA in 9.2 innings over seven games. Richmond veteran Daryl Maday has picked up five saves and 2-1 win/loss record in 11.1 innings over nine games.

Third baseman Daniel Mayora is batting .388 with a .398 OBP with 27 hits in 23 games. Tommy Joseph (C/1B) is leading the team with a .446 slugging, with five doubles, and three homeruns. Gary Brown (CF) has six stolen bases (and has been caught twice).

Juan Perez (CF) and Ehire Adrianza (SS) are the only Flying Squirrels to have appeared in every game so far this season. Nobody has come up from San Jose or Augusta; nobody has been bumped up to Fresno.

Having scored 85 runs and allowed 109 over the first 24 games, the Squirrels have a run differential of -24, 3rd worst in the league (ahead of only Portland [-47] and Altoona [-33]). That 10 run 6th inning by the Reading Phillies on April 17 inflates this somewhat, but still, this is worrisome. Squirrels Baseball says that the hitting will come:

The bats are there, but they are not as big as many imagined they would be. The approach at the plate seems to be fine as the Flying Squirrels are ranked in the upper third of the league in OBP and about the middle of the pack as far a drawing walks. The ISO is what is so surprising. With hitters like Brown, Dominguez, Joseph, and Adrianza one would expect the team to be a bit better at collecting multiple bases per hit. This is almost inevitably going to see an upswing, and if/when it does, the team most likely will stop hovering around the .500 mark. 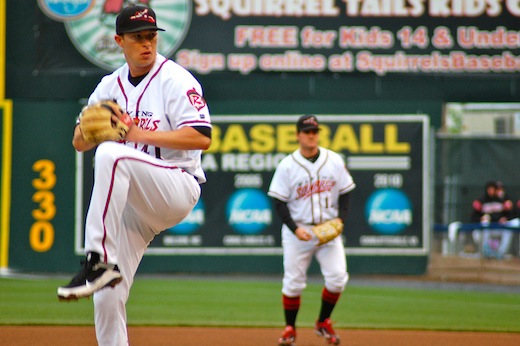 The San Francisco Giants farm system is off to a good start. The Augusta Greenjackets (A) are scrapping with a 11-12 record in the South Atlantic League Southern division. Relief pitcher Kevin Couture has put up a 0.69 ERA in 13 innings over eight games (11 strikeouts, four walks). The San Jose Giants (A) at 14-11 are in 2nd place in the California League North division, with outfielder Ryan Lollis hitting .351 through 19 games. Pitcher Jack Snodgrass has put up a 1.61 ERA across 22.1 innings in four starts, and Ryan Bradley has posted a 1.98 ERA in 27.1 innings and five starts. The Fresno Grizzlies (AAA) have started off 19-6 in the Pacific Coast League Pacific Southern division (best record in AAA) behind the hot bats of former Squirrels Roger Kieschnick, Conor Gillaspie, and Nick Noonan. 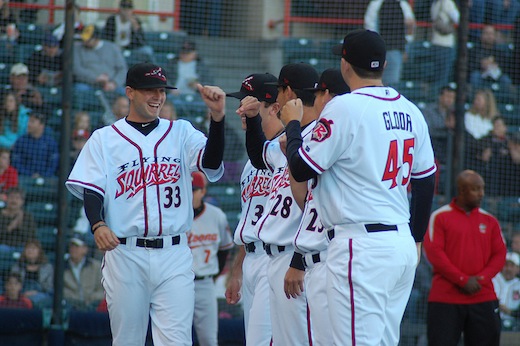