The four courses for the international UCI event (see below) span various age competitions and will start at area locales like Rocketts Landing, Kings Dominion, and the Greater Richmond Convention Center.

The UCI Road World Championships is the world’s capstone cycling event, and attracts 1,000 of the world’s premier male, female, and junior cyclists.

“The impact of the UCI Road World Championships on the Commonwealth of Virginia will be far-reaching,” said Gov. McAuliffe. “Not only will we see the benefits of attracting spectators from the United States and all over the world, but Central Virginia also will be on display for a worldwide television audience.”

Two of the four courses (time trial and road circuit) will receive a trial run ahead of the 2015 event when competitors in the USA Cycling Collegiate Road Nationals will race them in May. An additional criterium course will also be used in the Collegiate championships.

Mayor Jones addressed how the upcoming events will highlight the city.

“These two great cycling events will showcase many of the great attributes that make Richmond a tremendous place to live, work, play, and visit,” Jones said. “These events have been, and will continue to be, a catalyst for making the region more bike-friendly. It’s going to take the cooperation of the entire community to help realize the full potential these events present, and we are ready to showcase the Richmond region to the world.”

Tim Miller, the COO of Richmond 2015 said the local organization considered three factors when designing the courses: “competitive and technical aspects of the courses; the best of the Richmond region; and the overall impact on the local residents and businesses.” Union Cycliste Internationale (UCI) officials certified the courses during a visit to Richmond last December. 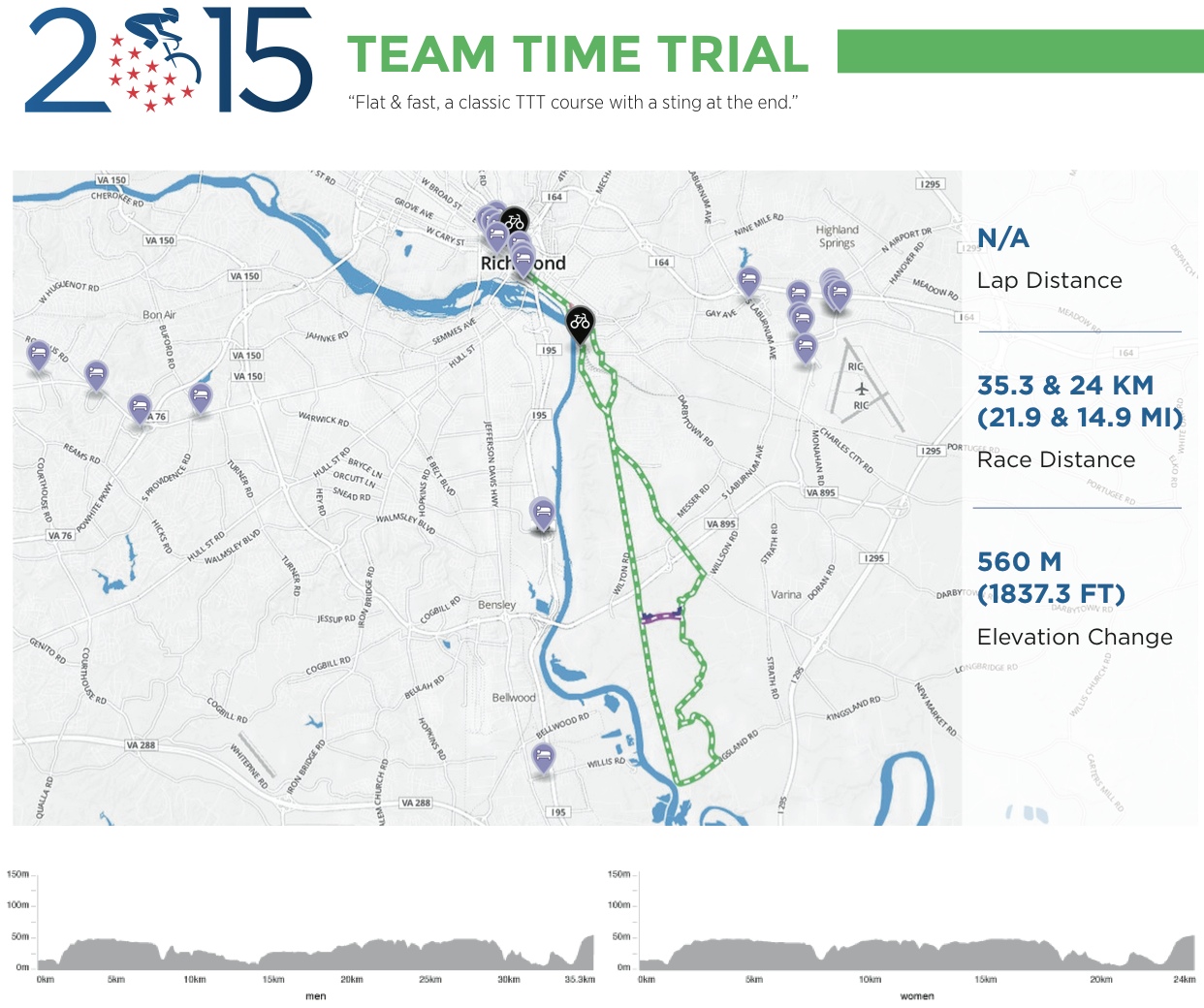 Depart Rocketts Landing in Henrico County and head east on Route 5 before winding through Richmond National Battlefield Park. The race enters the City of Richmond in Shockoe Bottom and finishes with a 350-meter-long climb of Governor Street next to the Virginia State Capital and dash down Broad Street to the Convention Center. 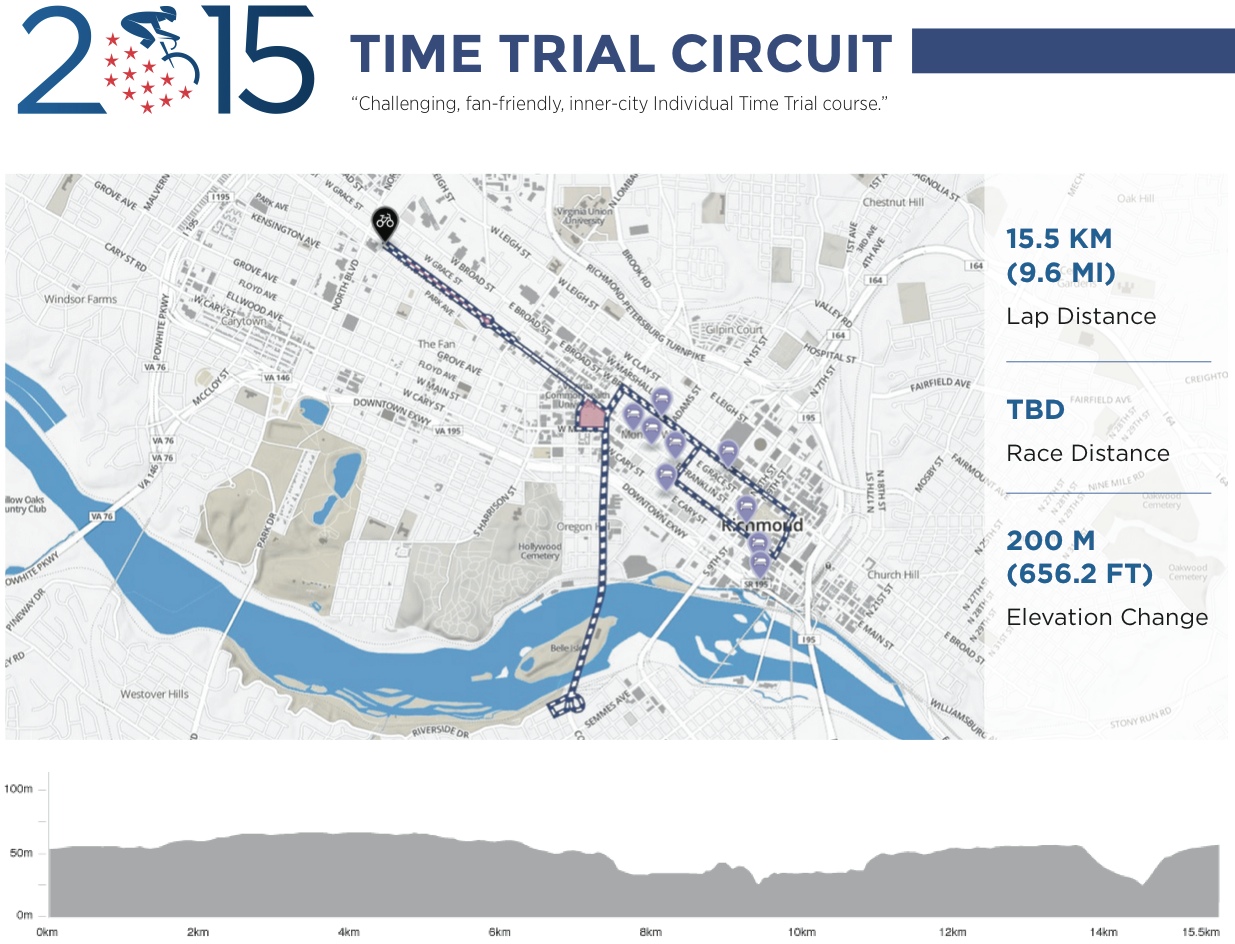 Depart the Convention Center and head to Monument Avenue. A 180-degree turn at the Jefferson Davis monument returns riders toward downtown, where they will speed through Virginia Commonwealth University and cross the James River before finishing with the climb of Governor Street and dash down Broad Street. 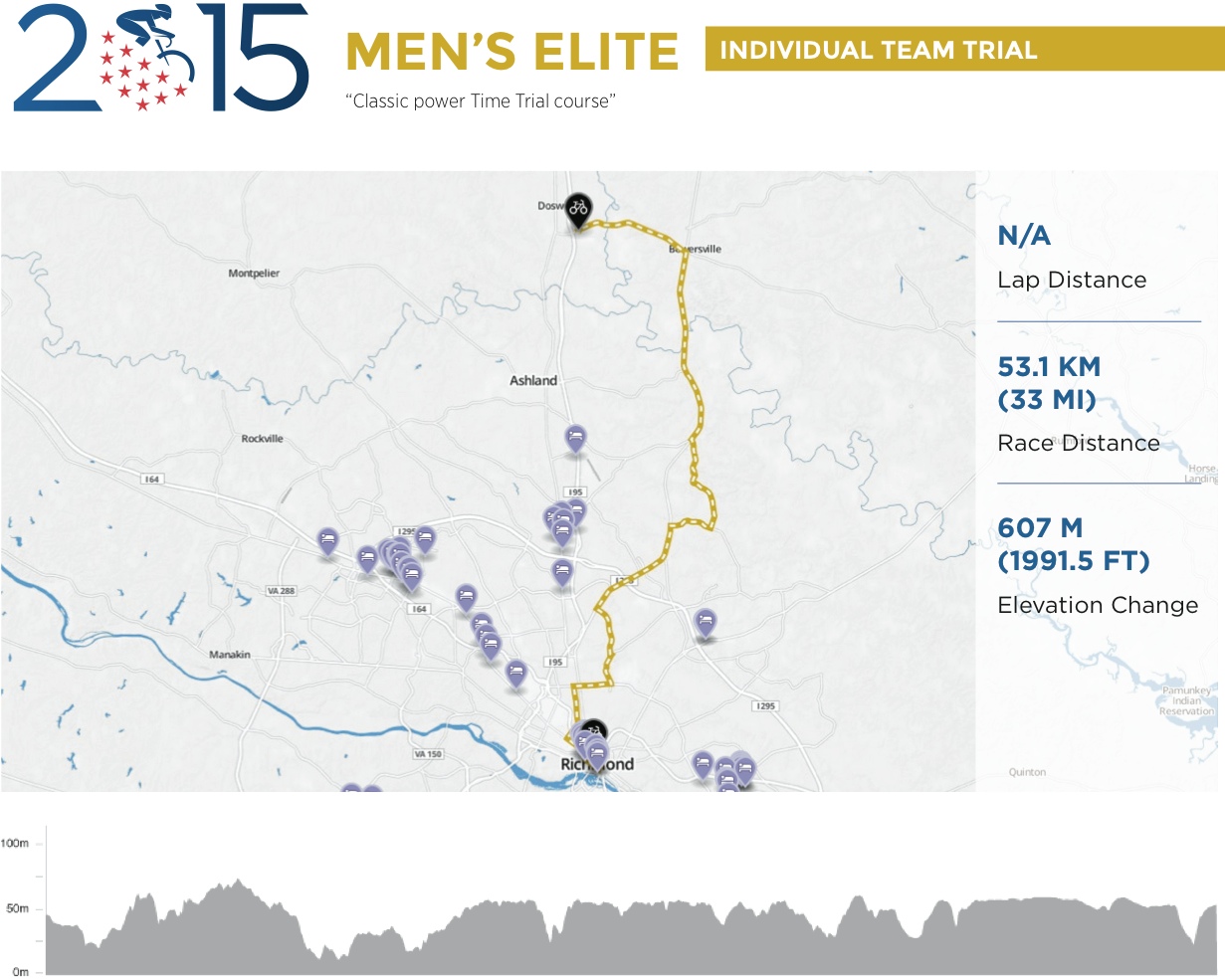 Begin at Kings Dominion and move past Meadow Event Park. Riders will pass the Hanover Courthouse en route to the City of Richmond via Chamberlayne Road and pass through Virginia Union University before finishing with the climb of Governor Street and dash down Broad Street. 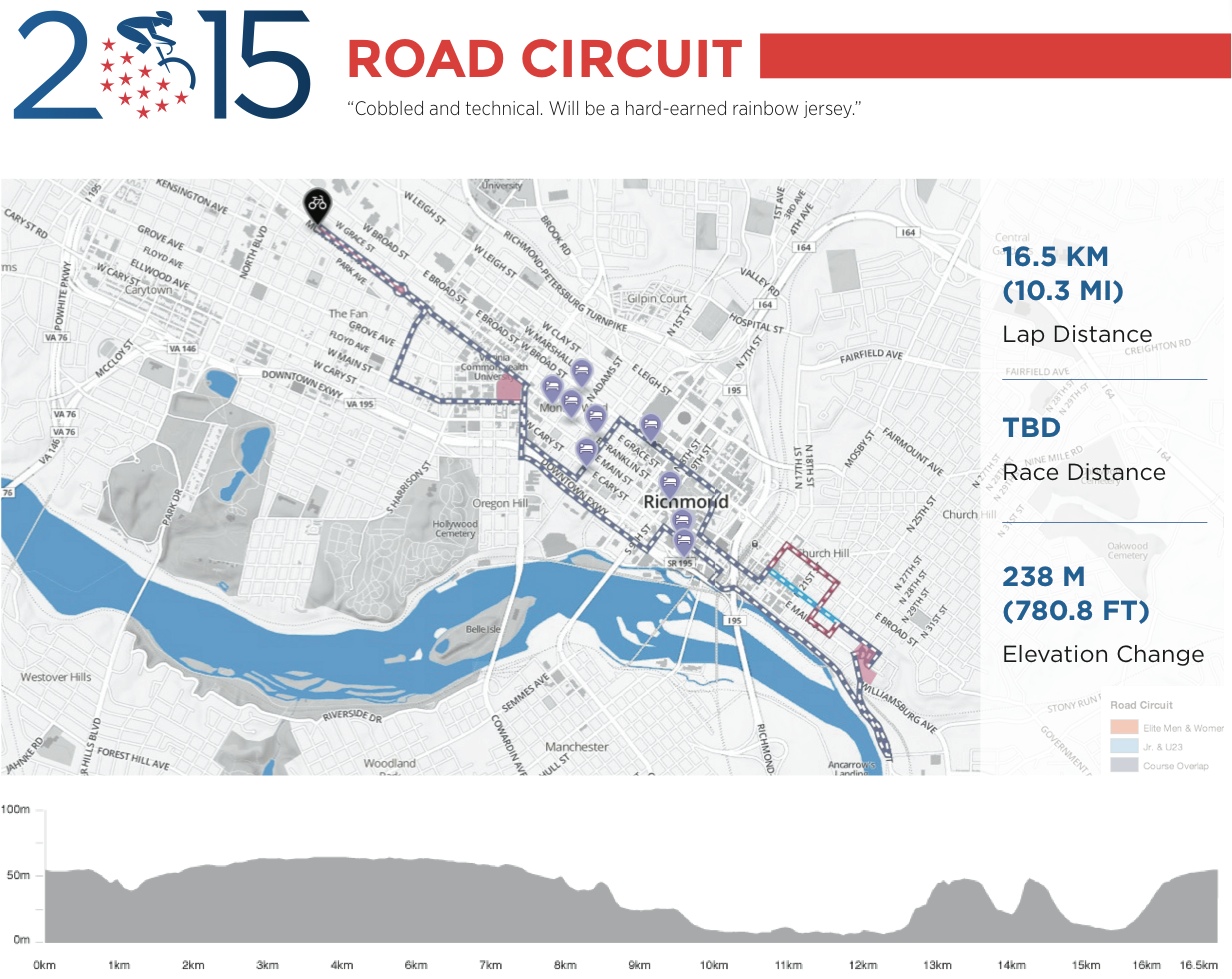 Start at the Convention Center and head to Monument Avenue, ultimately turning around at the Jefferson Davis Monument and heading through Virginia Commonwealth University. At the circuit midpoint, racers maneuver the cobblestone streets of Shockoe Slip and follow the canal to Great Shiplock Park. From Rocketts Landing, riders face a twisty, cobbled 250-meter climb up Libby Hill. Another 110-meter climb of 23rd Street awaits before the racers speed through Shockoe Bottom and finish with a climb of Governor Street and dash down Broad Street.