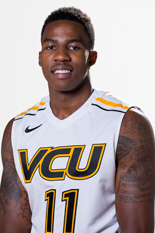 Rob Brandenberg is poised to have a great senior season. He is a great two-way basketball player with a complete game, and he should start every game next season. If he can build on the confidence that he regained last season, he will be one of VCU’s most important defenders and could hit 65+ 3-pointers in the absence of Troy Daniels.

Rob Brandenberg was VCU’s X-factor this season, and he won’t relinquish that role during his senior campaign. The Rams were a perfect 17-0 when Brandenberg scored 11+ points, and at times he was an unstoppable scorer. More importantly he was a great defender. He finished the season with 45 steals–a number that will likely go up next year in the absence of Darius Theus.

After an extremely promising freshman season, Rob Brandenberg experienced a tough sophomore slump. Despite his elite athleticism and slashing ability, Brandenberg attempted 140 of his 308 shots from 3-point range while only shooting 29.3% from downtown. At VCU Media Day, Smart called Brandenberg the Ram’s biggest “question mark.” If Brandenberg can meet expectations, he will transform the Rams.

Room for improvement: Rob Brandenberg is capable of being an elite scorer. If he can shoot more efficiently than his freshman season (2-pointers .480, 3-pointers .348), he will earn playing time and stuff the stat sheet.

Key stat: Despite being the shortest player on the Ram’s roster, Brandenberg recorded 22 blocks last season.

Entering the season Rob Brandenberg was expected to be one of the premier guards in the conference. As a freshman he showed exceptional flashes of brilliance. Despite his incredible athleticism (43″ vertical leap and wicked speed) he sometimes falls in love with the 3-point shot. After struggling to find his shot (including an 0-10 performance against Georgia State), Brandenberg eventually lost his starting spot to Troy Daniels during the 16th game of the season. Brandenberg bounced back and scored double figures in five of the Rams’ last eight games.

He is one of the Ram’s best defenders and shot blockers, and on any given night he can drop 20 points.