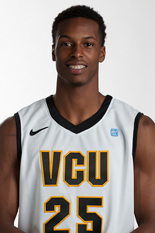 Reco McCarter will likely go down in history as the most famous Ram to never play meaningful minutes for VCU. Even before he arrived on campus, his highlight reels from high-school (incredible dunks!) had all of Ram fans excited. Unfortunately he only averaged 0.6 minutes and 0.2 points per game.

Highlight: McCarter played his final minutes as a Ram on February 8th against Towson University. During his career high four minutes, #25 grabbed a steal at mid-court and then slammed down his first and only dunk in Black & Gold.