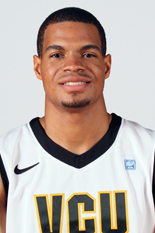 As the Ram’s only walkon, David Hinton has never and will never get enough minutes to accumulate significant stats. Despite playing very few minutes, Hinton has always earned praise for his hard work. As a senior, Hinton has an opportunity to be a leader and help the Rams win with intangibles.

The Ram’s boast one of the deepest front courts in the Shaka Smart era, and Hinton will likely see very few minutes. When Hinton enters the game, he needs to use his physical presence to draw fouls and wear out opposing big men.

VCU’s lone walk-on, David Hinton has never played significant minutes, but he has always shown the ability to impact the game in small spurts.

Highlight: Since arriving at VCU, Hinton has studied boxing to improve his toughness, and it paid off against Wichita State in the NCAA tournament. Playing only five minutes, Hinton drew two key charges from Garrett Stutz. Hinton’s front-court defense against the extremely talented Shockers was important to the victory, and the Rams boasted an impressive +6 points while #34 was on the court.