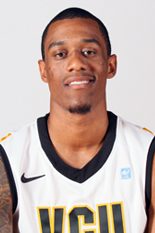 With Bradford Burgess gone, Coach Smart’s saying, “Theus=Team, Team=Theus” has never carried more weight. Theus doesn’t always stuff the stat sheet, but his leadership, defense, and ball handling/distribution are paramount to the Rams’ success. #10 finished the 2011-12 season with three of his best performances. His 16 point, five steal, five assist game against Drexel earned him MVP of the CAA Tournament; he hit the game winner with 12 seconds remaining against #5 Wichita State in the NCAA Tournament; and he grabbed five steals in the loss against offensive juggernaut #4 Indiana.

Darius Theus was forced to mature quickly last season and his play consistently improved throughout the season. His biggest room for improvement is shooting efficiency. His 2-point shooting percentage (.517) was a product of his ability to get to the rim, but if he wants to again attempt 62 3-pointers this season, he needs to shoot better than 24.2% from 3-point range.

At the beginning of the season, Coach Smart wrote “Theus=Team, Team=Theus” on a whiteboard. The successor to Eric Maynor and Joey Rodriguez, Theus has solidified his position as the Ram’s next great point guard. Theus tied the VCU single-game steal record (7) and was named the 2012 CAA Tournament Most Valuable Player. If history suggests anything, it’s that the Rams win on the back of great point guards.

Highlight: Darius Theus has made a name for himself in late game situations including the go ahead shot against Wichita State with 12 seconds remaining in the second round of the NCAA Tournament.