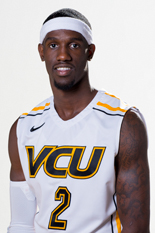 After the departures of Darius Theus and Teddy Okereafor, Briante Weber will be relied upon as the floor general of the Rams this season. His stat lines have the potential to be totally ridiculous as he sees his minutes and role increase. Weber’s play could be the difference between another first weekend exit in the NCAA Tournament and a run in March. Weber can repeat as the A-10 defensive player of the year and he is 82 steals short of the all-time record at VCU.

Briante Weber’s motor and athleticism make him a stat sheet stuffer. Despite playing less than 21 minutes per game, Weber grabbed a school record 98 steals, and he already ranks 5th all-time in steals at VCU. He made improvements in multiple facets of his game but most importantly he learned to play with discipline on defense and poise on offense while also maintaining his signature intensity. Weber was the 2012-13 Atlantic 10 Defensive Player of the Year, an accomplishment he will try to three-peat over the next two seasons.

Highlight: Briante Weber opened the season with a school-record 10 steals in 18 minutes against FGCU. The 15th seeded Eagles later became the lowest seed to ever make the Sweet 16.

Briante Weber is HAVOC! Jay Bilas named Weber co-best on-ball defender in the nation last season with Ohio State’s Aaron Craft, and Bilas also tweeted, “VCU’s Briante Weber will be National Defensive Player of the Year before he is done. Disruptive defender.” The praise is well deserved. Darius Theus will be VCU’s point guard, but Weber will get minutes as a backup in addition to playing alongside #10. In tandem, the duo from Chesapeake can rattle the nerves of any backcourt in the country. While Weber lacks a consistent outside shot, he has the opportunity to set the VCU single season and career steal records.

It isn’t often that a 160-pound player can be such a defensive menace. Weber led the nation in steal percentage at 7.01%, and despite only playing 18.8 minutes per game he racked up 77 steals (12th nationally, 1st in the CAA). Coach Shaka Smart is always supportive and confident in his young players, but Weber was this season’s biggest surprise. A 2-star recruit from Chesapeake, #2 earned national attention for his energetic on-ball defense.