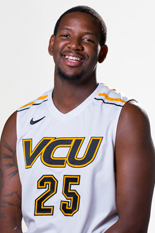 Simmons has fallen in the recruiting rankings since committing to VCU on September 1st, 2012, but he is still a top-40 center nationally. Since his commitment, Simmons has added thirty pounds to his frame and he looks extremely college ready. At 6-foot-9, 250 pounds he has similar physical tools as Juvonte Reddic, but he lacks offensive polish. Simmons had a quiet but mature game during the Black & Gold Tip-off, but his role will likely be limited this season.