The city’s got a plan, and this what it is, Stanley. Over the past couple of months a group of folks have been hard at work charette-ing their way to a new neighborhood plan (PDF) for the area around Virginia Union University, Brook Road, Lombardy Street, and Chamberlayne Avenue. It’s a complex and diverse neighborhood with old housing, new housing, and buildings zoned for retail, office, industrial, and institutional uses spread out over about 520 acres. This new plan looks to create a more cohesive “college town” environment while protecting the existing single-family neighborhoods in the area. Check it out: 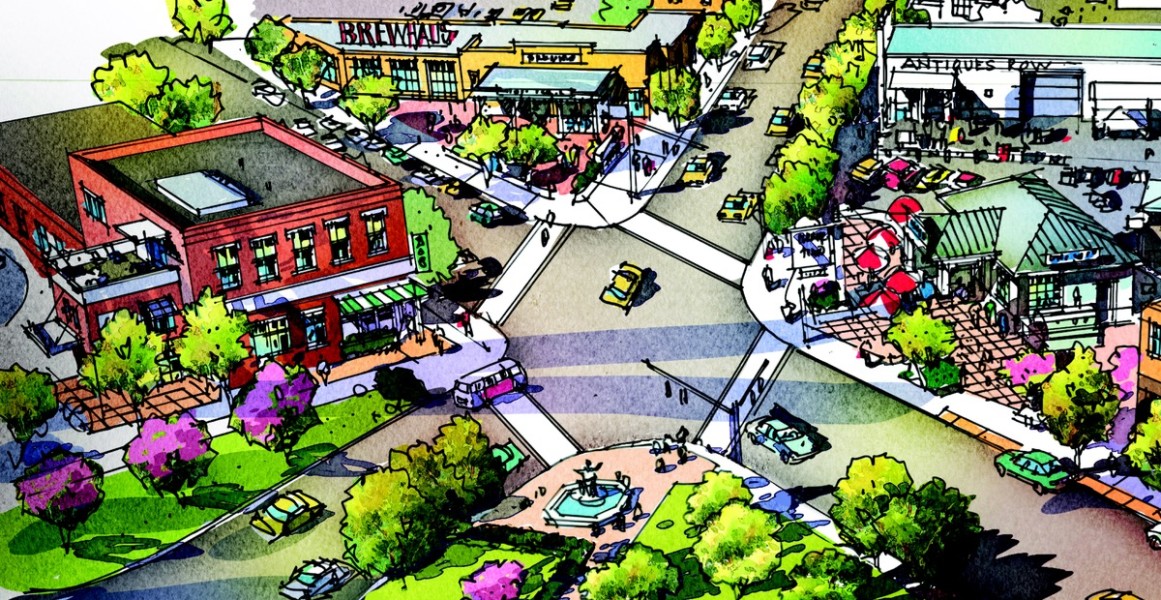 Compare that to the existing situation at the intersection of Brook and Lombardy: 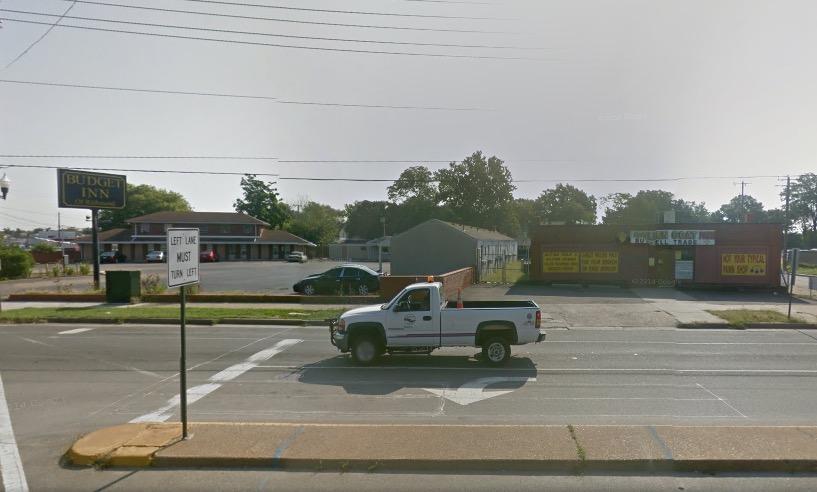 Impulse engines ahead full? Belay that order, ensign! The plan, if approved, would function as an amendment to the City’s Master Plan (which kind of neglected this area during the original planning process back in 2001). Think of it more as a guide to development and investment (both public and private) than development commandments handed down from on high. These are the things members of the community and smart professional planning folks have decided would be good for the future of the neighborhood. Which, speaking of, is an area that looks like this:

The main goal of the plan is to take the existing mixed up mishmash (left) and sort it out into a more cohesive set of neighborhoods (right) focused on a “college town” centered around Lombardy. The term “college town” is thrown around a lot in the plan, and boils down to a small area stretched along Lombardy that’s zoned either UB or UB-2. Here’s the description from the City’s zoning ordinance (PDF), which maybe the most boring PDF in my possession:

Pursuant to the general purposes of this chapter, the intent of the UB urban business district is to encourage business areas with a densely developed pedestrian-oriented urban shopping character, compatible with adjacent residential neighborhoods, and with minimal disruption from vehicle-oriented land uses and features that would detract from a safe, convenient and economically viable pedestrian environment. The district is intended to promote continuity of storefront character along principal street frontages, with minimum interruption by driveways and vehicle traffic across public sidewalk areas. The regulations within the district are intended to preserve the predominant scale and character of existing urban shopping areas, promote retention of existing structures and encourage that new development be compatible with such existing areas and structures.

Secondarily, the plan wants to preserve the existing, and old1, surrounding residential neighborhoods–about 2,550 folks live in the area2. The residents of those neighborhoods, nearby college students, and future tenants destined for those new apartments on Brook Road across from the VUU stadium, definitely could use some more regular-life neighborhood amenities. Lights, sidewalks, and drainage would be a nice start. From the plan itself:

The redevelopment of the Chamberlayne/VUU neighborhood as a pedestrian-friendly “college town” district will not likely occur without improvements to infrastructure that can support a more urban, walkwable environment; more balanced street designs for all users; and improved stormwater management facilities.

By improving the enviornment for pedestrians (and bicyclists!) the plan hopes to create a “gateway”–which means all sorts of things in Master Plan-ese, but mostly the goal is to “make the street the primary element in the urban fabric and require new development to reinforce the street with pedestrian-related activity.”

Once it’s adopted as an official amendment to the Master Plan, a process that involves both the Planning Commission and City Council, the first couple steps will be to adjust the zoning across the area to match what’s in the plan. After that, the sky’s the limit–well, funding, neighborhood cooperation, developer buy-in…those things are the true limit, not the sky.

There’s lots more in the plan itself, which is super readable and I totally encourage you to do so! Below you’ll find a couple of the more interesting bits.

Redo the interchange of death 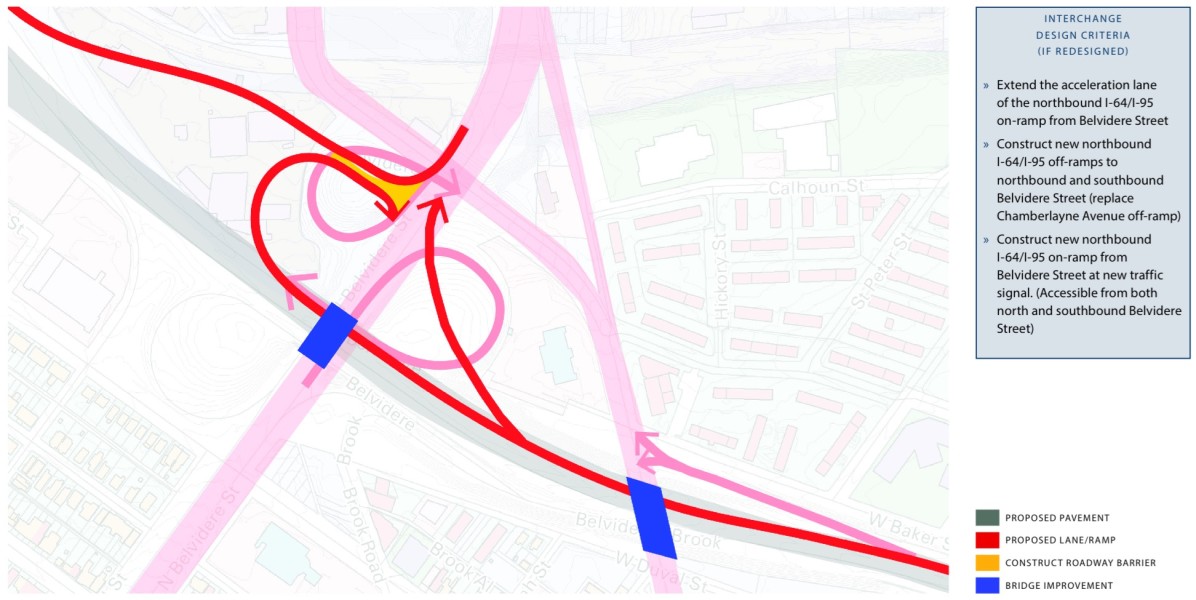 The southern end of Chamberlayne is a mess of highway on/off ramps and speeding cars. The plan calls for, what I assume will be a very expensive, rejiggering of the entire I-95 / Chamberlayne interchange to bring things up to VDOT recommendations.

Chamberlayne gets a diet 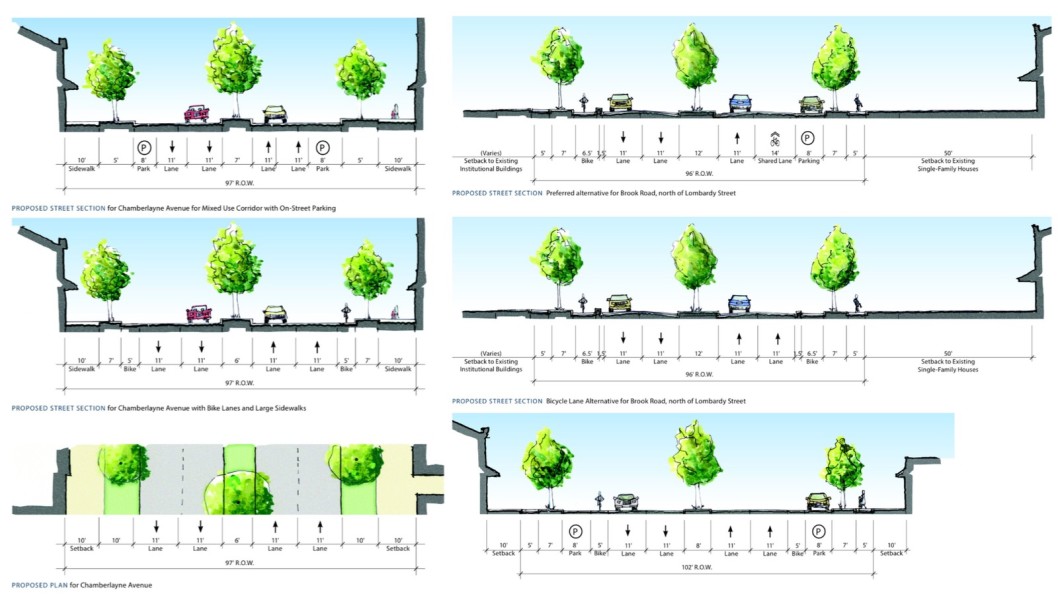 This section of Chamberlayne is an astonishing six lanes wide! The plan takes that thing on a severe diet, ditching two of the lanes for bike lanes or more pedestrian-friendly sidewalks. Note that the plans for Brook Avenue dovetail with the city’s Bicycle Master Plan, too!