Two years ago, Brittany Burke, a Fashion Merchandising student at VCU, received news that her little brother, Brandon, was fighting a rare form of cancer. After her brother’s ordeal, Brittany decided to use her fashion knowledge to help in the fight against cancer.

Two years ago, Brittany Burke, a fashion merchandising student at VCU, received news that her little brother, Brandon, was fighting a rare form of cancer. Just 16 years old at the time, Brandon was diagnosed with Ewing’s Sarcoma, a rare disease in which cancer cells are found in soft tissue or bone marrow. Brandon left his family home in Poconos, Pennsylvania to be treated and participate in clinical research at the National Institute of Health in Bethesda, Maryland. After undergoing several treatments and surgeries, Brandon’s leg was amputated. He is now cancer free and back to the active lifestyle he lived before his diagnosis. His story has inspired those who are blessed to know him, especially his sister Brittany.

Back in Richmond after her brother’s ordeal, Brittany searched for a meaningful way to become involved with the fight against cancer. She approached VCU Massey Cancer Center with the idea of hosting a fashion charity event to raise money for cancer research. Massey was excited to work with her and helped her organize her fashion show, named Crossing the Line, during Richmond Fashion Week.

“Brandon’s determination and positive outlook on life after treatment inspired me to get involved on a local level with cancer fundraising,” said Brittany.

This year will mark the second year Brittany and VCU Massey Cancer Center partner up to host Crossing the Line during Richmond Fashion Week. Last year, over 100 guests attended the event, which raised over $2,000 for Massey. “This year, I know we will far surpass that. I do not like to set specific goals and would just rather put my all into the event, but I would like to aim to raise $10,000,” said Brittany. 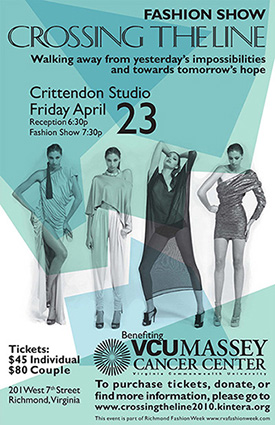 So what should you expect to see if you attend Crossing the Line? Brittany and her fellow students have pulled the latest fashions from local boutiques to be modeled on the runway. Carytown favorites Eurotrash, Pink, and Roan will be in attendance, as well as Short Pump bridal shop Alfred Angelo and Richmond-based online dress company, Shabby Apple.

Pink Co-Owner Deborah Boschen said that she has watched Richmond Fashion Week grow and thinks that this is going to be a breakthrough year.

“I’m proud of their efforts because it requires so much work and passion to produce. We’ve given the stylist, Brittany Burke, artistic control to pull clothing and accessories from Pink that represent her vision for the show and we can’t wait to see the final product,” said Deborah.

This year’s runway theme is “Grecian Influences,” which remains predominant in the fashion industry despite its introduction several seasons ago. Brittany said the reason for choosing this year’s theme was to “aim for a very feminine, soft show,” which she believes will have a wide appeal.

And don’t think the evening includes only a fashion show. They have much more in store, including a cocktail reception, music, and a silent auction. Dress to impress and come check out the latest fashions at Crossing the Line this Friday, April 23 at Crittenden Studios (201 W. 7th Street) at 6:30pm. Tickets can be purchased through VCU Massey Cancer for $45 per individual ticket and $80 per couple. All proceeds of this event will go directly to the VCU Massey Cancer Center, Richmond’s only National Cancer Institute designated cancer center, which specializes in research and treatment of rare forms of cancer. The hard work and commitment of hundreds of doctors and researchers at VCU Massey Cancer Center provide hope for people like Brandon–but they can’t do it without the generosity of the community.

Courtney Skunda is a Marketing and Public Relations Manager in Richmond, VA. She loves Barneys, Bergdorf Goodman, and Neiman Marcus in that exact order. You can read about her fashion obsessions on her blog, Cobblestone Couture.