VCU plastic surgery residents are exploring their artistic sides and learning about human anatomy in the process. With flex foam as its soft tissue and silicone for its polymer skin, the model of conjoined twins aided in reconstructing the tissue and skin of actual conjoined twins that were separated at VCU in 2011. Dr. Jennifer Rhodes, director of the Center of Craniofacial Care at the Children’s Hospital of Richmond at VCU, used that one-of-a-kind model to prepare for her part in a 24-hour marathon procedure separating conjoined twins Maria and Teresa Tapia.

“It’s not uncommon to order medical models” in the lead-up to comprehensive surgeries, Dr. Rhodes recently said. But most models are plastic, hardly suitable for detailed preparations ahead of a surgical procedure that would require extensive manipulation of the Tapias’ soft tissue.

It was VCU Arts student Morgan Yacoe that helped Dr. Rhodes by creating the silicone and flex foam model of the Tapia twins to assist in surgical planning.

“Once they were separated, one was left with a huge hole with no skin,” Yacoe said, recalling the discussion she had with Dr. Rhodes pre-separation of the twins. Dr. Rhodes wanted to know just how much skin would be available so she could surmise how many tissue expanders would be required for the reconstructive portion of the surgery. Whereas plastic models were of little use to Dr. Rhodes, Yacoe’s sculpting experience would prove invaluable.

“We decided to create a medical sculpture that had layers so we could simulate the soft tissue,” Dr. Rhodes said. Yacoe took about a month to create an exact replica of the twins, casting the model nearly two months before the surgery. 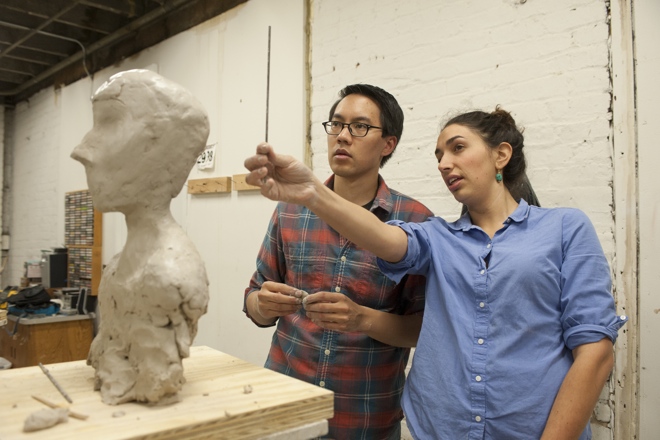 She ultimately found a mentor in Dr. Rhodes, shadowing her once a week during her junior and senior years. After Yacoe created the Tapia model, she and Dr. Rhodes wrote a paper citing their experience for The Journal of Craniofacial Surgery and presented electronically at last year’s annual plastic surgeons meeting in New Orleans.

In February, Yacoe created another model of A’zhair and A’zhiah Jones, conjoined twins separated at VCU Medical Center earlier this year.1 In July, Yacoe led several medical residents in the first sculpting workshop. “We had a live nude model in the center of the class,” Yacoe said. “Everybody had a sculpture stand with an armature2 on the stand” that residents added clay to, slowly refining the forms as they noted portions and different angles. “I feel as plastic surgeons, they’re always sculpting and modeling,” Yacoe said. “But I think that very few of them had any kind of experience working with clay before.”

Despite this, Yacoe said reactions from the residents following the workshop were positive. “They loved it. They said it was so useful,” she said. “They totally understood how it went along with their work.”

Dr. Rhodes said the artistic activity helps medical residents better understand and appreciate anatomy. “Being able to try and see it and recreate it…really enhanced their comprehension about the subtle anatomic detail,” she said. Medical residents took part in the second sculpture workshop last month. “I think the next step is to…set up a permanent class,” Dr. Rhodes said.

Yacoe will likely be a key component of that class. “I’m figuring out different ways to work with VCU Sculpture and the VCU Medical School,” she said about her current plans. She once thought about becoming a plastic surgeon, which may still happen one day. But for now, she’s “continuing to work on refining my technical skills as a sculptor” and “to find projects that incorporate medicine and art.”

Dr. Rhodes recognizes that the coupling of arts and medicine has a bright future at VCU. “I think art as it’s applied to medicine is an incredibly fruitful area to pursue, and one that is really difficult for most medical schools…to have knowledgeable teachers,” Dr. Rhodes said. “We’re so lucky at VCU to have such a fantastic department of sculpture with such a broad range of resources.”