Here’s why a new patch of grassy hillside is such a big deal. Jack Berry worries about his lawn.

Yes, there are scores of performers, musicians, and folky miscellany requiring the frantic attention of organizers and volunteers in the days leading up to the 10th anniversary celebration of the Richmond Folk Festival.

But on a patch of land next to the Belle Isle parking lot, Jack Berry toes the turf with his shoe.

The Bermuda grass sodded across the site of the 4.5 acre natural amphitheater, hereafter the home for the Altria Stage (the main stage of Folk Festival), wasn’t planted in the ideal seasonal window. That’s why Berry–executive director of Venture Richmond, organizers of the annual folk festival–is so concerned. “We’re hoping the roots get established before the Folk Festival and we have 10,000 people trample it,” he said.

Bermuda grass grows best in the late spring and early summer, especially when temperatures range between 90 – 100 degrees. The original idea was to plant the sod several months ago so it’d thrive in the dog days of Richmond. But the natural amphitheater, proposed by Venture Richmond last year, ran into several unnatural speed bumps that delayed the project. 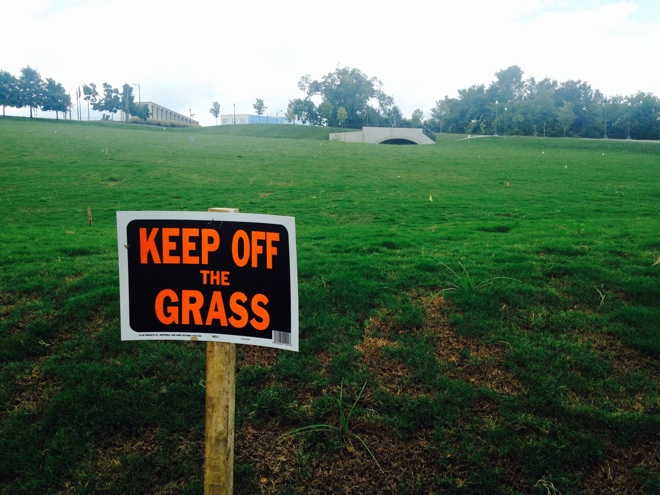 It took over a year of back and forth with the City’s planning commission to get their blessings for the roughly $500,000 natural amphitheater, what Berry called “mostly a grading project” that shaved and filled parts of the property. It wasn’t until mid-August before workers could lay the sod.

For all the concerns people voiced about the project–that it’d undermine the historic Kanawha Canal should the City decide to one day refill it, and that it’d bombard Oregon Hill residents with noise–the area looks rather unspectacular: it’s just a grassy hill overlooking the James.

Berry believes when people see the renovated land they’ll wonder why it caused such a stink. “I think a lot of people will think: ‘What was all the controversy about?'” he said. Before the project, the area was a mishmash of neglect, strewn with old tires, trash, and ugly vegetation. Now it can accommodate thousands of folk fans during the festival, and give residents a spot to picnic, play with kids, sunbathe, sled, etc.1 “This is going to be a beautiful space year-round and available for the public,” Berry said. “It’s just going to be a very nice space.”

Looking upward from the bottom of the property, called Tredegar Green, you see nothing but grass. But the property is actually bisected horizontally by wetlands occupying the former site of the canal.

By 1850, people regularly boarded small passenger boats at the Turning Basin to travel the area’s watercourse. Men would mount a rope to a horse or mule who would then pull boats up the canal. The patch of land next to the canal, traversed by the animals, was the towpath. Railways ultimately made this type of travel obsolete, so the Kanawha Canal and adjacent towpath were largely abandoned.

“We brought in 500 trucks of dirt to smooth out the towpath,” Berry said walking next the former canal, now filled by a lush wetlands.2 “It turns out these wetlands are very interesting and healthy,” he said, adding he wants to give VCU students the opportunity to study and steward the small ecosystem. “Instead of just having it, [let’s] take care of it.” 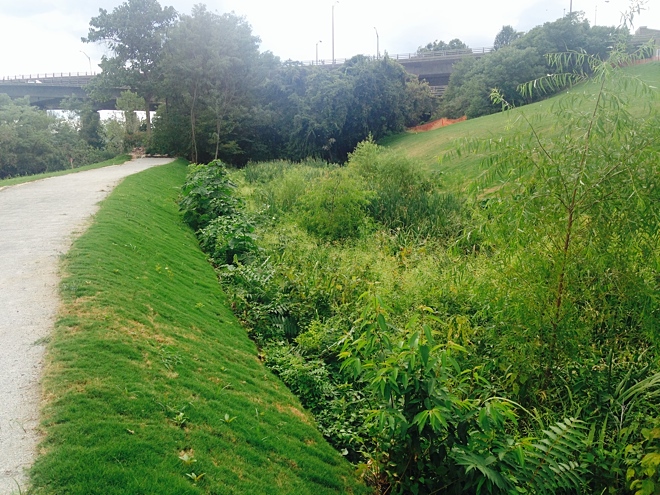 Per the planning commission’s ruling that gave the go-ahead for the project, Venture Richmond can only hold events on Tredegar Green four days a year. So after the three-day Folk Festival, it only has a one day for an additional event.

Part of the arrangement derives from the concerns of Oregon Hill residents that Tredegar Green’s proximity to the neighborhood will bring increased noise. Berry said preliminary analysis suggests the previous site for the Folk Festival’s main stage (within eyeshot of where the new main stage will be) was louder than the new location because the stage on Tredegar Green emits sound from a lower level. “The natural contours of the land will provide a natural buffer,” he explained.

Berry said Venture Richmond has hired a professional audio analyst to measure the decibel levels heard in Oregon Hill during the festival. He hopes the analysis will prove that Tredegar Green is a less noisy than concerns warrant, and will help Venture Richmond earn more days during the year to host events.

While he looks forward to showing the City that Tredegar Green should host more than four days of events each year, Berry’s most excited for Richmond to have a new, permanent “beautiful amenity along the riverfront.”

He just hopes the grass holds up.