The Tire-less James cleanup this weekend

Boats needed to get tires out of the James River. This Saturday, September 13th, volunteers are taking to the river to clean up the mighty James. The target of the James River Association (JRA) hosted cleanup will be the hundreds of tires that end up in the river. JRA isn’t doing this alone and will have help from Virginia Canals & Navigations Society, Boy Scouts of American, and Bridgesone Americas will be there to haul off the tires as part of their Tires4Ward program.

During last year’s inaugural event, over 500 tires were removed from a section of the James River between Lynchburg and Richmond. This year, JRA is hoping to increase that number as “The Tire-less James” is extended to the entire length of the river.

“The James River faces numerous challenges on a daily basis, with pollution being one of the largest. By engaging volunteers in large scale cleanups like “The Tire-less James,“ JRA can have a direct and positive impact on the river here and now, “ said Pat Calvert, Upper James River Keeper. 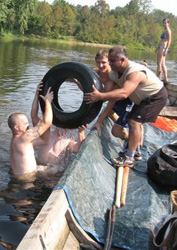 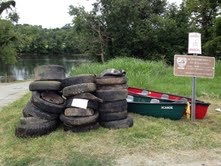 Volunteers with boats that are appropriate for safely floating tires down a selected section of river are needed for the cleanup on September 13, 2014. To register for the “The Tire-less James” cleanup or for more information, visit www.jamesriverassociation.org. In order to cover the entire stretch of the James River from Iron Gate to Newport News, volunteers will be asked to register to cleanup a designated section and deliver tires to a set location for pickup.