The future of Monroe Park

Spanning 130 pages, the Monroe Park Master Plan (PDF, 70MB) is an exhaustive look at Monroe Park’s history and faults — usually one causing the other. Painting a picture of a park once the center of a bustling southern town, it details many possible ways to return Monroe to its turn-of-the-century glory.

The document carries with it some harsh descriptions of current facilities as well, and points out specific (from the Monroe Park Planning Board’s point of view) hindrances to future success.

The first 50+ pages deal mainly with the park’s history, presenting it as a historical site that could support a community that demands the public space.

William Byrd I purchased the 7.36 acres of land late in the 17th century. Covering a large portion of present day western Richmond, the rural land was bought and sold to different parties over the years. Around 1840, with rapid expansion taking its toll on the populace of Richmond, the City caught public park fever and began investing in land conservation and public space.

Hollywood Cemetery was one of the first of the public space projects, and a “capital square” was next on the list. Originally planned as a four acre purchase, City Council cut it back to three, and, in 1851, the then titled “Western Square” became the first Richmond-owned public park.

Though outside the city limits at the time, The Virginia State Agricultural Society used the land for an annual agricultural fair. Hailed for its success, the fair moved to a larger lot by 1865. This made room for the park space as a Civil War Confederate camp. Sixteen barracks were constructed on the quite urban landscape. The barracks were torn down some time near the end of the war, and the flattened acreage was prime for reinvention. 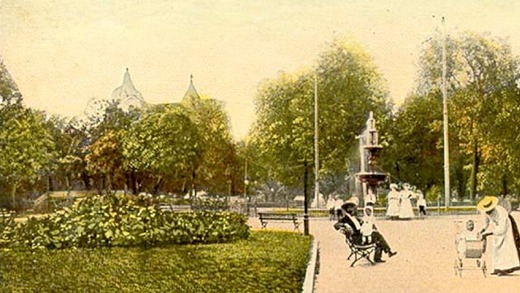 In 1869, City Council annexed the Fan and Oregon Hill neighborhoods from neighboring Henrico county, and a civil engineer was brought in to construct a public square. The park was then named Monroe Square, after Virginia-born President James Monroe. Lt. Col. Albert Ordway, the post-war occupying federal officer stationed in the park’s neighborhood, advocated strongly for improving the square as a public space.

In 1875, Wilfred Emory Cutshaw, a Virginia Military Institute graduate, took the role of City Engineer. Most of the improvements he made in his 30 years as Civil Engineer remain intact today. The original path plan, fountain placement, and a majority of the trees match the plan written over 130 years ago.

A lack of funds for the next 100 years limited improvements to the park. The central Checkers Building itself is constructed on the remains of the former center square building.

The next bulk of the Park Plan details several possible ways to improve each affected detail. From inadequate path lighting, to non-ADA compliant restrooms, to possible trip hazards, every nook and cranny is called on for improvement.

Not all options are superficial: raising paths to grass level and developing better irrigation systems will help with storm water issues and area flooding, returning most water to the soil as opposed to the City’s sewer system.

Better angled light fixtures will direct the luminescence down and inward toward the park, reducing light pollution. Even the color and warmth of the beam is bisected and presented in different lights for the city to consider for the final project.

The plan culminates with a recommendation strategy in three phases and an explanation of a post-renovation non-profit organization overseeing the park.

Phase One calls for the most physically demanding renovations: laying a brick perimeter path, replacing out-of-date storm drains, demolish existing paths, and installing stone dust paving along existing curb lines, and many more. Everything must go.

A new circulating water pump system will replace the old; “engineered soil” will be be installed in specific areas. One of the many proposed food kiosks will be built along with a set of movable chairs and tables. Trees that do not fit in to the original turn of the century plan, or “Period of Significance,” will be removed, including some “ornamental” trees and evergreens; 62 trees in all are on the chopping block. 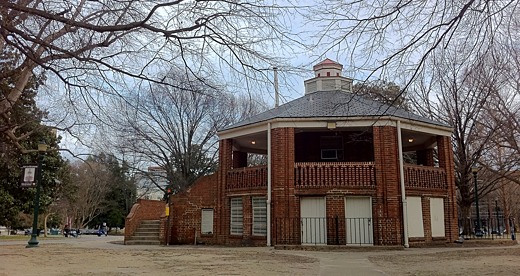 A fenced playground will be built, including a giant Virginia map in the paving pattern. This will replace the grassy area to the south of the building.

Phase Three will consist of minor and less critical elements to the park. Information kiosks, a water spray park, and a petanque/quoits court are on the list but not described as not “crucial to the overall success” of the park.

The last part of the plan deals with developing a non-profit body to manage the park. In City Council meetings, Fan District Councilman Charles Samuels said the oversight committee would be similar to the one managing Maymont Park, just south of Carytown.

The plan details the committee’s role as fund raisers that would see to the financial security of the park. It would consist of 12 to 15 members, meeting quarterly with representatives of the local community including property owners, retailers, near by neighborhoods, VCU, and the City of Richmond. A “strong director” with experience in real estate management, design, business, and public space would lead the organization.

The City of Richmond would then “transfer operating authority and responsibility to this new entity from the city.” The non-profit organization would also have the right to collect all revenue generated from the park.

Revenue would come in the form of food kiosks and events, in addition to the work done by the overseeing board.

A security force would be developed and present in the park from 7am to 11 pm, with one to two unarmed officers patrolling at any one time, funded by the park’s revenue.