The 7-Eleven on Jahnke Road was robbed around 3:25 this morning. Richmond Police detectives need the public’s help to identify the man in the attached photos who is a suspect in a commercial robbery that occurred this morning.

At approximately 3:25 a.m., an unknown male entered the 7-Eleven store located at 6209 Jahnke Road, displayed a handgun and demanded the money from the register. The suspect took cash and fled on foot.

The suspect is described as a 6-foot-2-inch tall, black male with a slim build, who was last seen wearing gloves, a baseball cap, a red bandanna over his face, sunglasses, a black hoodie and black sweat pants.

Anyone with any information about this suspect is asked to call Third Precinct Detective William Cutshall at (804) 646-1068 or call Crime Stoppers at 780-1000 or text Crime Stoppers at 274637, using the key word “ITip” followed by your tip. Both Crime Stoppers methods are anonymous. 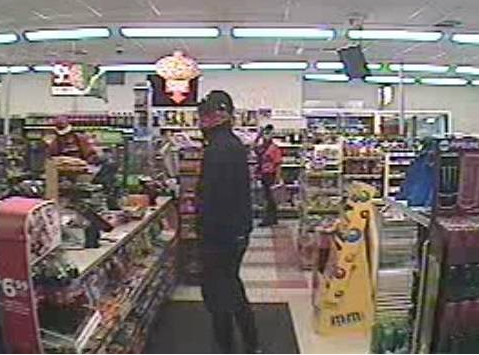