Raiders of the Lost Lock (Island)

One of Richmond’s most subtle and less-known islands is actually a hotbed of history and mystery. We take a look at both of these attributes to get you excited for an upcoming tour sponsored by the Valentine that will give us all a closer look at this little rock of land.

For anyone who reads my Civil War column here at RVA News, you know I’m a fan of historical mysteries; all the events and stories that have somehow been lost to history over the decades that leave us only with our imagination to fill in the blanks.

So, when I heard the story of Frederick Lunn, a Union officer in the 36th New York Infantry buried somewhere on the Lock Island in the James River, one immediately starts to wonder just how exactly a Union soldier ended up alone and dead on this little island that once housed a foundry supplying iron for Confederate weaponry? See, there goes that imagination thing I was talking about.

The story of Frederick Lunn is just one small part of a greater history that I learned about while walking the Valentine Richmond Historical Center’s “Raiders of the Lost Lock” tour. The small island, located upriver from downtown Richmond and just south of Windsor Farms, was the scene of quite a lot of activity over the last 250 years. 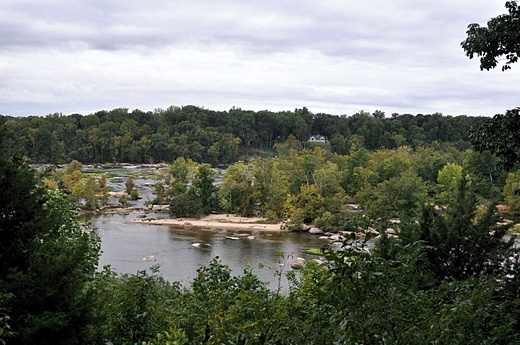 First, I should state that Lock Island wasn’t always an island. In 1776, it was just a hill along the shore of the James, the perfect location to build a foundry to provide iron tools for the growing city of Richmond. The Westham foundry was completed in 1779 and, in addition to civilian tools, it also produced grape canister and cannonballs for the Continental army during the Revolutionary War. This, of course, attracted the attention of the British army who destroyed the foundry in 1781.

Several years after the war, production resumed at the foundry, aided by the construction of the James River and Kanawha Canal. The canal enabled the foundry to quickly move goods between Richmond and points west. Before the canal was fully completed, however, railroads began to emerge as a more efficient means of moving goods. The land along the canal was purchased by the Richmond Allegheny Railroad and tracks were laid down along the canal tow path. Our tour took us down to the river to walk along the original canal tow path where sections of the old canal could be seen all around. The railroad eventually rerouted the tracks in 1908, creating a deep cut into the back side of the hill that actually created Lock Island. Walking around the island and being able to track its progress from the river in 1776 to the canal in 1785 to the railroad in 1880 was fascinating.

But for the main event on Locke Island, we only need to step back in time a short distance to the 1960’s… 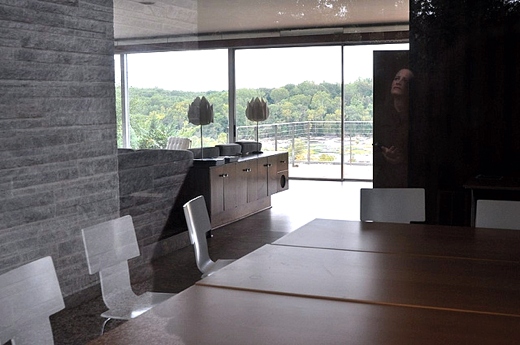 A view inside the Rice house

The most striking feature on the island is the Rice House. Built for Ambassador Walter Rice and his wife Inger Rice in 1965, the house was designed by famed modernist architect Richard Neutra. With a swimming pool, floor-to-ceiling windows, and exterior balconies, all with an incredible view of the James River, you can only imagine the 60’s-era parties the Rices must have thrown there.

The Rices donated the house to the Science Museum of Virgina in 1996, and museum volunteers have spent the past year working to renovate and preserve the home. You can tell they’ve put in a lot of work and it will be exciting to see when it’s complete and they are able to offer more tours of the interior of the house. In addition to the work on the Rice House, they also built walkways and stairs around the island and made it much more accessible to visitors. For the tours themselves, the Science Museum of Richmond tapped the Valentine Richmond History Center to help provide tour guides and coordinate the tours.

The walking tour of Lock Island really is a rare opportunity to see multiple eras of Richmond history come to life together in one place.  Because the island is not open to the public, tours are limited to small groups and don’t happen very often, so I’d highly recommend taking this tour and checking out this unique piece of Richmond history. The next tour is on Saturday, October 15th and details can be found HERE.