Often overlooked, the pumphouse is an impressive building with a rich history. These two pictures are from the excellent VCU Libraries Digital Archives, specifically Art Work of Richmond which was originally posted in 1897.

The facility pumped water uphill from the canals to the Byrd Park Reservoir, the city’s main water supply. Far from being entirely utilitarian, however, the pump house was also a popular gathering place in the late 19th and early 20th centuries. The pump house is in a scenic location at the Three-Mile Locks of the canal system. The site inspired Colonel Wilfred Emory Cutshaw, Richmond’s City Engineer from 1874 until 1907, to design the building as a social venue as well as a waterworks. He included an open-air dance hall, or pavilion, on the second floor above the equipment room. The pump house had the reputation of being one of the only buildings in the country designed and used as both a public utilities building and a social hall. 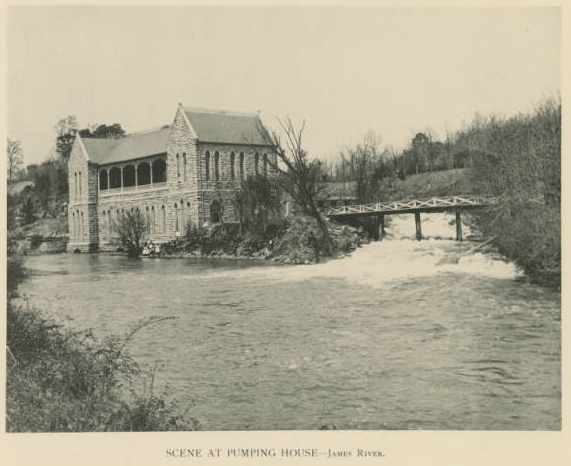