Preventive double mastectomy is ‘nothing compared to freedom’

Angelina Jolie’s op-ed about her preventive double mastectomy got people talking. One of them is local woman Tracie Abrams who, like Jolie, had one herself. For Tracie Abrams, reading the recent op-ed by Angelina Jolie discussing her preventive double mastectomy is like looking in a mirror.

“It was like reading my own story,” said the 34-year-old postpartum nurse at St. Mary’s Hospital, wife, and mother of three. “I’m so grateful she put it out there.”

Like Jolie, Abrams was diagnosed with a gene mutation that made it all but certain that her life would be cut short by cancer. And like Jolie, Abrams elected to fight those odds with a double mastectomy.

”In hindsight, it seems so obvious now”

BRCA1–an innocuous name for an enemy. In fact, all people have this gene, but only a relative few carry its hereditary mutation that dramatically increases the risks for cancer.1 “If your parent is positive for this mutation, you have a 50/50 chance of passing it down to your children,” Abrams said.

Abrams inherited her gene from her grandmother’s father, who died young from pancreatic cancer. Abrams’s maternal grandmother died of breast cancer in her 70s, and her mother’s sisters each had breast cancer too: two died in their 30s, the other in her 50s. Unknown to them was that each carried the mutated BRCA1 gene. So did Abrams when she was born, but she didn’t know until four years ago.

She could have known earlier. In 1998, her mother, age 43, was diagnosed with fallopian tube cancer. That should have been a red flag that both Abrams’s mother and herself should be tested for the mutative gene. “At the time, we thought it was unrelated to the family history, and the doctors were pretty sure of that also,” Abrams said. Screening for BRCA1 was also uncommon in those days. “In hindsight, it seems so obvious now.”

In early 2009, both Abrams and her mother were tested. “We met with a genetic counselor, which is what I advise most people to do,” she said. “They are the ones that really determine if you are eligible to have this screening done.” That counselor researched and discussed the Abrams family line and said both should have the test.

Nurses drew Abrams’s blood and sent it out for examination2 in spring 2009. Two weeks later, she met with her genetic counselor in his office to learn the results.

As an adult, Abrams never thought in terms of if she got cancer. “I always thought ‘when I get cancer.'” She finally learned of the inevitable. “My fears and my thoughts are now true…”

She returned home to tell her husband, who was watching their then two-year-old at the time. “Then I called my mother,” Abrams said. “She cried and I cried.”

Though no fault of her own, Abrams’s mother ultimately passed the mutation to her daughter. “I think it’s hard as a parent to think that you are responsible for some of the hard things your children have to go through,” Abrams said.

And while the immediate mood at the Abrams house was filled with mourning, Abrams grew disconcerted with her maudlin thoughts. “I didn’t have cancer, so what right do I have to be sad?”

Abrams said the next step wasn’t clear. After researching and discussing with doctors and surgeons, she learned she could begin a semi-annual regiment of MRIs and mammograms to stay up to date with any cancerous growths. “[The] mammogram was no big deal, but an MRI is quite the experience,” she said.

For starters, it takes nearly an entire day to complete the process. During which, nurses insert a catheter into the patient’s arm and pump gadolinium–an earth metal–into his or her body to help a computer take detailed pictures via radio waves. This would be done annually.

“I don’t want to do that once a year,” Abrams said. She also didn’t want to feel the “weight of breast cancer looming over me.” So she decided to prevent cancer by having a double mastectomy.

“So I can get on with my life” 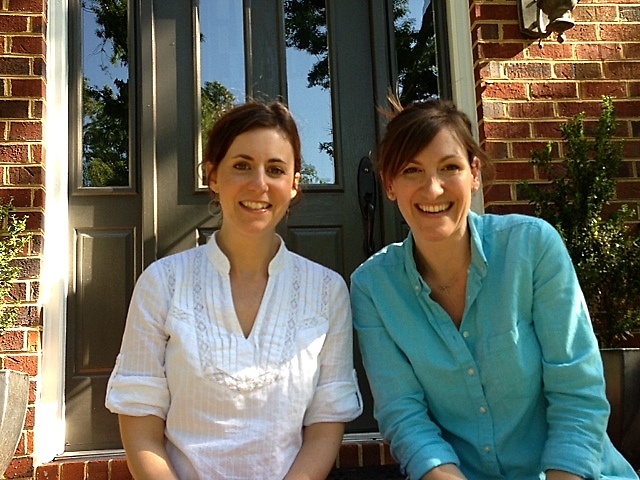 There are several types of mastectomy procedures. Abrams, her mother, and sister each had mastectomies “and none of us went the same route.”

Abrams did, however, go the same route as Angelina Jolie. The first procedure, in November 2009, was the mastectomy: “the removal of your breast tissue.” After the doctor removes the tissue, a plastic surgeon inserts an “expander” underneath muscle on each side of the chest. “It stretches your skin and stretches out your pectoral muscles,” she said. “When you wake up you have these little mounds” in your chest. “It looks really wonky with those expanders. It doesn’t look like a normal breast.”

Connected to those expanders are drains, through which saline was injected. Patients return every few weeks to gradually increase the size of the cavity through additional saline injections. This is done overtime to match the patient’s previous breast size, and once achieved, surgeons insert implants.

Pain and soreness from major surgery were expected, but the agony Abrams experienced exceeded the norm for most mastectomies. “The pain was very alarming,” she said. So much so, that it overtook thoughts about losing parts of her femininity. “I had other despair with the pain and what I had been through,” she said. “Pain really wears you down.” It did so for over a month.

She just wanted the healing process to be over. “Let’s get these suckers out [i.e. the expanders] and the implants in so I can get on with my life.” In January 2010, doctors removed the expanders and inserted implants (as doctors did with Jolie), completing the process.

As a result of the double mastectomy, she no longer has feeling in her breasts. And when her youngest daughter was born, Abrams was unable to breastfeed. As both a mother and a lactation consultant, this was especially difficult, but other women donated breast milk to her. Abrams said so many “women cared for me and my family. It was so beautiful.”

But Abrams is not out of the woods yet. She still has a nearly 60 percent chance of developing ovarian cancer as a result of her mutative BRCA1. “I’m kinda just banking on my age and doing what I can lifestyle-wise to prevent ovarian cancer” for as long as possible, she said. Those lifestyle changes include steady exercise, a strict plant-based diet, and avoiding toxins in and around her body. But she’s only delaying the inevitable. “Someday, I will have my ovaries removed.”3

In early 2010, Abrams and her sister, Dina Reinhardt, launched a Richmond chapter of Facing Our Risk of Cancer Empowered (FORCE). The group gives women who are considering cancer treatment, or whom have already had it, the support, awareness, and information that Abrams wished she had both before and after her procedures.4 “I didn’t want women to feel alone,” she said.

Three years after her initial surgery, Abrams is confident in her decision to have the procedures. “I have tremendous freedom with my mastectomy,” Abrams said. The weight of breast cancer no longer looms, and there’s no need for unpleasant MRIs or mammograms.

But what about the changes to her body? “It’s aesthetics. And to me, that’s nothing compared to the freedom.”