Police search for man wanted for assaulting an officer

The incident was a hit and run and occurred on the 3200 block of Chamberlayne Avenue. Richmond Police detectives need the public’s help to locate the driver who struck and injured officers at a traffic stop yesterday morning.

Detectives have identified the driver as Daejshon-terrique Blizzard, 21, of the 3200 block of Chamberlayne Avenue. Blizzard is a black male who is approximately five feet seven inches tall and weighs 140 pounds. His photo is below. 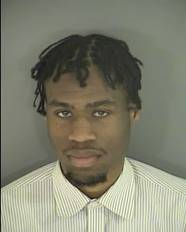 At approximately 3:15 a.m., in the 1600 block of Lamb Avenue, officers attempted to stop Blizzard for a moving violation. Blizzard turned the vehicle and struck the officers. The officers’ injuries are not considered life threatening. Blizzard ran from the scene.

The vehicle Blizzard was driving was impounded for the investigation. Detectives believe Blizzard is now driving a Jeep Cherokee that is red in color.