Supporters of Planned Parenthood gathered Friday on the campus of Virginia Commonwealth University to voice opposition to abortion-clinic regulations passed by the General Assembly and to recent national attacks on the organization. The rally came the day after the Virginia Senate joined the House of Delegates in passing legislation that would place strict restrictions on the state’s abortion providers.

Supporters of Planned Parenthood gathered Friday on the campus of Virginia Commonwealth University to voice opposition to abortion-clinic regulations passed by the General Assembly and to recent national attacks on the organization.

The rally came the day after the Virginia Senate joined the House of Delegates in passing legislation that would place strict restrictions on the state’s abortion providers, likely causing many clinics to close.

“For the past month, there’s been an all-out assault on women’s reproductive health care, from the fake hoax videos coming from our clinics, to Congress voting last week to defund Title X and Planned Parenthood, to last night’s vote,” said Planned Parenthood employee Courtney Jones.

“It’s an all-out assault on women’s bodies – women’s access to health care – and frankly, we’re not going to put up with it anymore.”

Jones, who helped organize the rally, called the legislation vague and unclear. Planned Parenthood is waiting to see how the Virginia Board of Health handles the situation, she said.

“We’re looking at our legal options at this point,” she said.

Jones said four clinics in the state may be able to meet the new standards. Twenty-one clinics in Virginia now provide abortions.

Rally attendees hoisted bright pink signs, despite the day’s high winds, while speakers shared their positive personal experiences with Planned Parenthood and led the crowd in chants of “our bodies, our lives, our right to decide” and “Virginia legislators, lend an ear, your war on women stops right here.” 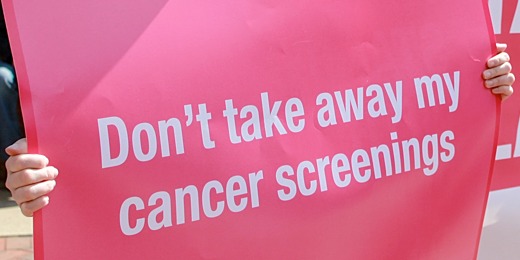 Fia Midboe, a student in VCU’s master of social work program, was one of an estimated 60 demonstrators. She said she is disappointed in Virginia.

“It’s hard to live in a state that’s set back 100 years in terms of values,” Midboe said. “It’s also hard to be in a place and see women who you know need these services and are not able to get them anymore because of ridiculous regulations.”

Midboe was particularly concerned about the legislation’s effect on women who have been raped or have experienced other difficult life situations.

“I think Virginians – particularly women and supporters of women’s health – need to band together, coalition-build, need to get loud, need to get frustrated and need to let people know that this is not what we want for ourselves,” Midboe said.

Thursday’s floor debate in the Senate was equally heated.

“This is absurd,” said an angered Senate Majority Leader Richard Saslaw, D-FairfaxA Capital Women’s Health Clinic in Richmond, said that most of the state’s abortion clinics could buckle under the costs of the new regulations. The bill would require retrofitting clinics to conform to hospital standards, including full-size waiting rooms and hallways the width of two gurneys.

“We really do see it as politically motivated,” Abrams said.

“The politicians behind this plan falsely claim they are protecting women’s health, yet their ultimate goal is to make it even more difficult for women to access abortion care in Virginia,” Keene said.

Last August, Attorney General Ken Cuccinelli issued a legal advisory focused on the health regulations in abortion clinics statewide. He said that he would like to see these clinics held to the same standards as large-scale hospitals.

Having passed both House and Senate, the bill awaits the signature of Gov. Bob McDonnell, who has publicly supported Cuccinelli’s opinion.

Olivia Gans, the president of the Virginia Society for Human Life, hailed the bill’s passage as “a very common-sense, protective measure.”

According to Gans, a Virginia woman was one of Gosnell’s patients who died in what prosecutors called a “house of horrors.”

“Abortion is not a casual experience,” Gans said. “It’s always an invasive procedure. We have evidence that women are dying.”

Jeff Caruso, executive director of the Virginia Catholic Conference, said his organization applauds the passage of the legislation.

“In our view, the General Assembly decided the abortion industry should no longer be exempt from safety standards that apply to other surgery centers,” he said.

“These are common-sense safety standards that will do a lot to further women’s health and safety,” he said.

Planned Parenthood began in 1916. The organization’s mission is to improve women’s health and safety, prevent unintended pregnancies and advance the right and ability of individuals and families to make informed, responsible choices.

“The funding that goes to Planned Parenthood is for health screenings and all the different services they provide that go toward the health and safety of women,” Gomperts said. “If that funding is taken away, women are not going to have the resources that they need.”