UPDATE: Over 1,000 protest for women’s rights outside of Capitol today

Over 1,000 people lined the walkways outside the Capitol this afternoon in a silent protest against several pieces of legislation making their way through the General Assembly that would strip women of reproductive rights.

Over 1,000 demonstrators assembled outside of Virginia’s Capitol this afternoon to protest several pieces of legislation currently working through the state legislature. Amid melting snow and extra police, demonstrators lined the walkways for Speak Loudly with Silence, a silent protest.

“Things are really scary,” said Erin Reichhardt, one of the many demonstrators that took part in this afternoon’s event. “Things are being passed I’d never thought would be passed.” She said that recent bills have made her politically active for the first time in her young-adult life.

The legislation of which Reichhardt speaks includes bills on various topics: designating a fetus as a person at the moment of conception, requiring women who wish to have an abortion to undergo a medically unnecessary ultrasound, and stripping state-abortion funding for low-income women. Reichhardt said that these pieces of legislation undermine the preferences of the Commonwealth as they represent “a really narrow part of Virginia.” 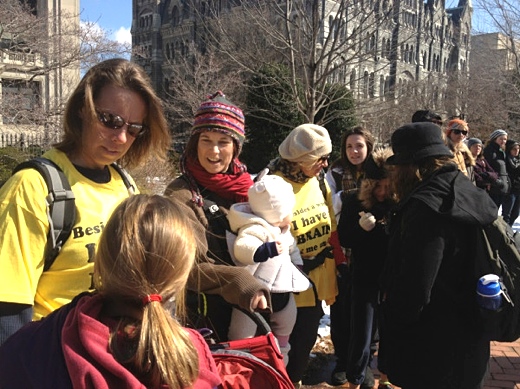 Protestors outside of the State Capitol

The protest event outside of the Capitol lasted from 11am – 12:30pm, at which point attendees were encouraged to walk into the General Assembly building (still open despite the Presidents Day holiday) to speak with their representatives and dissuade them from supporting the proposed bills. At 2pm, a rally was planned at the Bell Tower.

Karen Kersting, a PhD candidate studying psychology at VCU, said that these bills were a violation of taxpayer dollars. “I was just horrified…It’s very offensive to me that legislators would be so flippant.”

Caryl Burtner, a Richmond resident for thirty-eight years, said that “these issues are so important” and that the “right to control your body is a fundamental liberty.”

“No one likes abortion,” continued Burtner, who said that education and contraception are the best ways to lower the abortion rate. She referenced a Christopher Newport University/Richmond Times-Dispatch poll that found that 55% of registered Virginia voters opposed the ultrasound requirement before an abortion, saying “this is not what the people want.” She also pointed out the legislation was recently parodied nationally on Saturday Night Live.

Burtner said that Gov. McDonnell, who has the ability to sign or veto any legislation that passes the General Assembly, may encounter a reckoning should these bills pass both the State Senate and House of Delegates. She said that Gov. McDonnel is a potential frontrunner for a Vice President position for whomever wins the Republican presidential primaries. If Gov. McDonnell signs any or all of the controversial bills, he might be thought of as too conservative. However, if he vetoes the bills, he would likely lose support among fellow Republicans. “He’s got to figure out what to do.”

For the second day in a row, the House of Delegates has deferred action on a bill that would require women to undergo a medically unnecessary ultrasound before having an abortion. The chamber is scheduled to vote on the measure tomorrow. A reason for the delay in voting was not immediately given.