One with The Ad People

The phrase “out of your element” is one which would apply to many situations I find myself in on a regular basis. Therefore it was in the true spirit of adventure that I jumped at the chance to attend the infamous Richmond Show.

The phrase “out of your element” is one which would apply to many situations I find myself in on a regular basis. Therefore it was in the true spirit of adventure that I jumped at the chance to attend the infamous Richmond Show (aka One Show aka RAD Show) and mingle with some of the greatest advertising minds in the city. Armed with my knowledge of advertising — learned from popular television — I suited up, slicked my hair down, and headed out to become one with the ad people.

The first thing I discovered upon arriving at The Richmond Renaissance, was that while the penchant for drinking hasn’t been quelled since the fictional 60’s, fashion has taken a much more casual turn. A diverse group of students and industry veterans mingled, ate sushi, explored each others work, made cotton candy, and partook in libations.

The theme this year was The Greatest (Richmond) Show on Earth, and it lived up to the circus title. Ringmaster for the evening was storied TV newsman and local twitter favorite, Gene Cox. After comparing the entire crowd to hookers in his opening remarks (news and advertising folks have always been adversaries for your eyeballs), the awards portion of the night and the doling out of the prestigious cannonballs was off with great force and loud noise.

The annual Harry Jacobs scholarship was the first prize awarded for the night. The VCU Brandcenter’s Brian Jang received the award, for $5,000, which was given by the Ad Club in conjunction with The Martin Agency. Jang must have studied the same material as I, as he graciously accepted his award in his sharp suit.

Over the next two hours the best of Richmond advertising was displayed on screen to thunderous applause and laughter — when appropriate. The Best In Show cannonballs were distributed as follows: 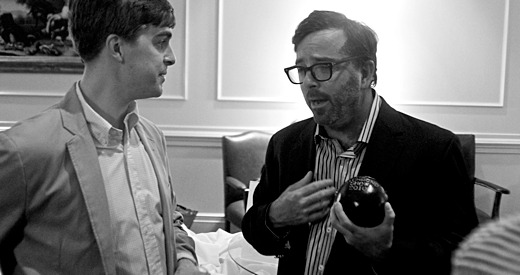 Capping the awards portion of the night Charlie Connell of PUNCH was named Ad Person of the Year. Connell, managing partner at the Richmond agency, has more than 20 years of experience as a creative professional. Of the recognition, Connell says: “To be recognized by this prestigious group is certainly an honor and a milestone in my career. I love all aspects of the creative business, but the work that the PUNCH team creates for local non-profits is certainly the most rewarding. We are hopefully making a positive impact on Richmond and the world.” He showed a video, produced by his PUNCH team which humorously showcased his beginnings and the passion and fun with which he approaches his work. He then credited his enthusiastic team at PUNCH, those in the room who gave him his start, and his clients as reason for his win.

Connell’s award closed out the ceremony early, which was a good thing as the crowd was getting thirsty again. Those with cannonballs proudly showed them off while downing a few last drinks and mingling with their advertising peers. As for myself I took a few group photos, shook a few hands, and quietly escaped to Broad Street to find my next adventure for the night.

Johnny Hugel is a hopeless multi-tasker who spends many an evening writing about the distractions (across film, tv, comedy and the web) that keep him from focusing on his own projects, as scattered as they may be.