The reason I ask is that the City Council Formal Meeting typically starts at 6:00pm, and Kathy Graziano & friends look like they are already in full swing and it’s only 5:30pm. This is worrying–even after I find this is still the informal meeting. The Council then adjourns, moving to a private meeting.

I’m told there is going to be a major dust-up by Occupy Richmond (OR) to protest Mayor Jones’s secret plan to end the occupation of Kanahwa Plaza before it began, so we can add this to the items not on the agenda.

There’s a youth cycling team behind me and at least 50 occupiers occupying the front rows. They are very young. Martin Jewell is introducing an expedited motion to have a hearing on OR’s right to camp in a city park. Whether it gets approved or not, these folks will not go quietly into the night. 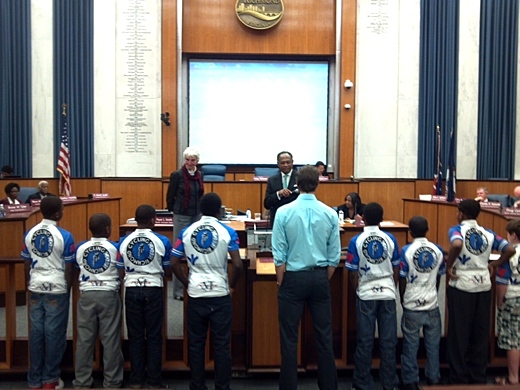 Members of the Richmond Cycling Corp being addressed by Mayor Jones

It’s now 6:30pm and not a councilperson in sight. I’m glad I had those peanuts before I got here. Now I’m wondering where I can get a Diet Coke.

Silver Persinger is here, one of our premier council gadflies. Silver is famous for, among other things, his wall-to-wall coverage of City Council. He also ran against Marty Jewell for Council and was a write-in candidate for President. Believe me, it takes a lot of dedication and energy to do what he does. While I don’t often agree with him, you gotta admire his stamina.

As Council trickles in, here’s what you missed during the last two weeks:

After I left the last meeting, Council held an ad hoc hearing on Sheriff Woody’s hiring practices after which they told him cut it out. Councilman Jewell then requested special hearing on the Mayor’s RMA refinancing plan after which the RMA board quietly ignored a 5-4 Council vote to delay and approved the existing plan unanimously.

Mayor Jones is quickly using up his City Council brownie points. Today’s Consent Agenda has three items aimed at the administration. One setting a deadline for submitting the City budget and two requiring it to cooperate with the City Auditor. If the past is any indicator, Mayor Jones will quietly ignore these too.

President Graziano now calls the meeting to order. Before business can begin, there is leftover business from the informal session.

First, the City’s Legislative Coordinator briefs the council on the legislative wish list for the upcoming State Legislature session. He is mercifully brief.

Now on to redistricting. Nothing drastic is being proposed. It looks like a consensus proposal is in the works which won’t be voted on till next month. 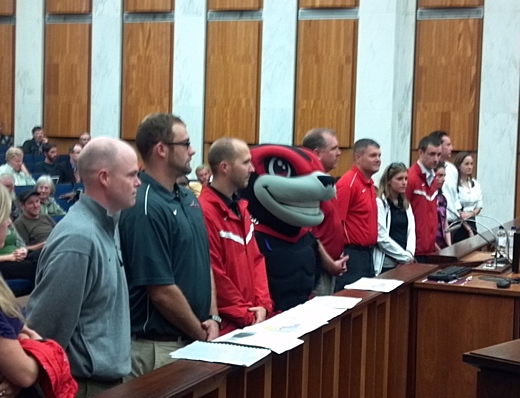 Nutzy and members of the Flying Squirrels organization

The last hearing is on amendments to the Community Based Corrections Plan. This is not brief. While important, I wouldn’t know how to summarize this. The plan should be available for public inspection. The Office of the City Clerk can point you in the right direction.

One of the Occupy Richmond activists is speaking now. They are mad about the Mayor’s secret plan, but he’s long gone, so the council gets the brunt of the speaker’s ire. It’s not nice, but it’s not long.

A new speaker, a self described victim of poverty and miseducation, makes no excuses for a life mislead.  “I did the crime and I did the time”, but now that he is out he is in a prison of a different sort: a society that closes doors in the face of ex-cons. Josiah Harris made one of the best uses of his three minute citizen comment presentation I’ve ever seen. He is articulate, genuine and passionate. When finished there was a round of spontaneous, if out of order, applause.

Now for the Consent Agenda:

Silver is back to his old form, jumping from behind the camera to point out that there is no penalty if the Mayor ignores the previously mentioned resolutions. He has a point.

A Council regular is speaking now. I don’t know his name, but he puts on quite a show. Speaking in a very clipped East African accent, he is animated, emotional, and almost unintelligible.

Marty Jewell’s expedited resolution on the occupation of Kanahwa Plaza is on the floor now. The issue before the Council is whether they should set aside a legal ordinance banning overnight camping in city parks. Councilman Samuels and the others object to a rushed vote on a resolution with far reaching implications. Can they make an allowance for Occupy Richmond without making the same allowances for neo-Nazis or the KKK? With the tide running against him, Jewell grudgingly backed down and withdrew his resolution. Don’t despair, it is coming up as a regular item on the Council’s next agenda, by then though, it may be a moot point as the occupation will be over.

The only other item of note was a very funny, but unintentional remark by President Graziano at Reva Trammels expense. After telling Bruce Tyler, who makes no announcements, he was her favorite council member, she then called on Ms. Trammel causing ripples of laughter throughout the chamber.

I guess you had to be there.