While a similar House measure failed this week, a Senate subcommittee has passed a proposed constitutional amendment to automatically restore rights to felons upon completion of their punishment. Sen. Chap Petersen, one of the amendment’s sponsors, said, “I feel like we have a pretty tightly drawn proposal which restores rights to nonviolent felons who both serve their time and fulfill the conditions of their probation.”

“It is important that restoration be automatic and without strings attached for qualifying Virginians,” Petersen said.

Gov. McDonnell called upon legislators to pass a measure that would automatically restore voting rights to non-violent felons in his recent State of the Commonwealth address.

Mark Cole (R-Fredericksburg), chair of the House Privileges and Elections Committee, and one of the members of the subcommittee who voted against proposed constitutional amendments that would automatically restore voting rights to felons, told RVANews:

“I am just not comfortable with having an automatic restoration. I think there needs to be a review process before the rights are restored, and that’s what we currently have. So, I just don’t think that the current process is broken. Certainly I think people deserve a second chance, but there should be some review and not an automatic restoration.”

Del. Riley Ingram is a Republican who also serves on the House Privileges and Elections Committee. Ingram, who represents parts of Henrico, Chesterfield, Prince George, and Hopewell counties, said “there are concerns” about a blanket restoration initiative.

“There are a lot of felonies that are more serious than other felonies,” Ingram said by phone. He added that he and many delegates were unwilling to favor any amendment that would restore rights to those felons with particularly objectionable criminal acts, such as those associated with a murder or other violent crime, even if the felon in question didn’t commit the violent act, but were complicit in it. Ingram said some lawmakers hesitate to support an amendment that would restore rights to felons whose criminal acts were associated with any violent crime.

“I’m not sure that is the right thing to do,” he said.

Delegate Rosalyn Dance (D-Petersburg), a proponent of restoring voting rights to felons (see bottommost post) said she was disappointed that none of the restoration bills passed the House subcommittee. She has asked Del. Cole, chair of the Privileges and Elections Committee, to bring at least one of the constitutional amendments up for full committee consideration, with the hopes that it would pass for eventual debate on the House floor.

“Whether or not this happens remains to be seen,” Dance said. “One thing is certain: I, as well as many of my colleagues, will continue the fight to make restoration of rights an automatic process once one has repaid his or her debt to society.”

Gov. Bob McDonnell issued the following statement after a House subcommittee voted down consideration of a constitutional amendment that would restore voting and other rights to convicted felons upon completion of their sentence:

“I am very disappointed in today’s vote against these constitutional amendments. Once individuals have served their time, and paid their fines, restitution, and other costs, they should have the opportunity to rejoin society as fully contributing members. As a nation that embraces second chances and believes in redemption, we want more productive citizens and fewer people returning to prison. Automatic restoration of constitutional rights will help reintegrate individuals back into society and prevent future crimes, which means fewer victims and a safer Virginia.

When I ran for Governor, I pledged to institute the fastest and fairest restoration of rights process in Virginia history. We have approved more applications for the restoration of rights than any prior administration. We are acting on completed applications in 60 days or less; far quicker than prior efforts. While it is a faster process, it is still an executive branch process. A person convicted of a non-violent offense, who has served their time, and paid all their fines and costs, should be able to then regain the right to vote and begin their life again as a fully engaged member of our democracy. A constitutional right deserves a constitutional amendment so that all applicants are treated equally across administrations.

I believe strongly, as a matter of conscience, in protecting the constitutional rights of our citizens. And I believe that it is time for Virginia to join the overwhelming majority of states in eliminating our bureaucratic restoration process and creating a clear predictable constitutional and statutory process. I appreciate the support of Lieutenant Governor Bill Bolling and Attorney General Ken Cuccinelli for this measure. Our Administration will remain committed to seeing Virginia put in place an automatic restoration of rights process for non-violent felons. It is the right step to take.”

This morning, a subcommittee within the Republican-controlled House Privileges and Elections Committee voted down bills that would restore voting rights to non-violent felons, an issue touted by Gov. Bob McDonnell in his recent State of the Commonwealth address and supported by Attorney General Ken Cuccinelli.

Del. Greg Habeeb (R-Salem) sponsored one of the motions, a constitutional amendment that would automatically restore rights to non-violent felons upon completion of their sentences.

“I am disappointed in the outcome this morning,” Habeeb said. “However, our work does not end here and I am optimistic about the future of this legislation. In the years ahead, I will continue to push for a more efficient and less burdensome re-entry process in the Commonwealth.”

Virginia is one of only four states in which felons must apply to their governor to restore voting and other rights.

Delegate Rosalyn Dance of Petersburg gave Gov. Bob McDonnell a standing ovation when he announced his support for restoring the voting rights of nonviolent felons during his State of the Commonwealth address this week.

Dance, a Democrat who has championed that issue during her eight years in the House, was surprised and delighted that the Republican governor declared, “It is time for Virginia to join most of the other states and make the restoration of civil rights an automatic process for nonviolent offenders.”

“When I heard him announce his support, I was stunned at first,” said Dance, who represents the 63rd House District, which includes Petersburg, part of Hopewell, and parts of Chesterfield, Dinwiddie, and Prince George counties.

“Then I was on my feet applauding with both Democrats and Republicans.”

In recent years, the General Assembly has defeated efforts, including proposals by Dance, to return the rights to felons who have served their time. However, she believes McDonnell’s support could persuade lawmakers to pass such legislation. Dance also recognized a former senator from Norfolk for her longtime advocacy of the issue.

“Sen. Yvonne Miller, who recently passed away, was a strong leader on voting rights restoration. So it is fitting that now is the time we will take the first steps into making that happen,” Dance said. 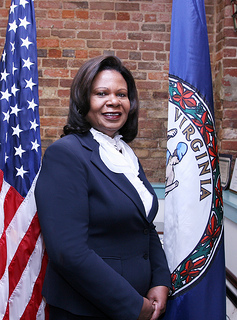 She said that for 20 years, Democrats have been pushing for the restoration of voting rights for felons. Virginia is one of two states (the other being Kentucky) where convicted felons cannot automatically vote after they have served their time in prison. In Virginia, felons who have completed their sentences must petition the governor to have their rights restored.

“While we have significantly improved and fast-tracked the restoration of civil rights process, it’s still an executive process,” said McDonnell, who is completing his fourth and final year as governor.

“As a nation that believes in redemption and second chances, we must provide a clear path for willing individuals to be productive members of society once they have served their sentences and paid their fines and restitution.”

McDonnell noted that two Republican delegates – Greg Habeeb of Salem and Peter Farrell of Henrico County – have introduced bills to address this issue.

“I urge you to support legislation for the automatic restoration of rights for non-violent felons,” the governor told a joint session of the House and Senate on Wednesday, the start of the 2013 legislative session.

Several Democrats in both the House and the Senate also are sponsoring constitutional amendments to address the matter.

Dance said that she is happy to see bipartisanship support of the issue and that she is “cautiously optimistic” about the chances for passage.

“This is a very big step,” she said. “I commend the governor and am excited to get a bill on his desk.”