With large banks suggesting new debit card fees only to backpedal later on, combined with the ire of the Occupy protesters, this Saturday’s Bank Transfer Day may have more legs than we thought. What’s caused the dissatisfaction with national banks, and should local banks should get ready for an influx of new customers?

If this sign represents how you feel about your own bank’s dealings, then November 5 may mean more to you than you expect. This Saturday marks Bank Transfer Day, a national initiative to facilitate members of national banks to move their personal assets to credit unions and local banks.

Richmonders are certainly not exempt from acrimonious feelings towards larger banking institutions. In fact, local credit unions and banks have already seen an increase in membership, and this migration may be in part related to Bank of America’s recent—and recently reneged—decision to implement debit card fees as well as the recent Wachovia to Wells Fargo changeover. The recent Occupy movements give us a picture of what we should expect and accept from our banks, ultimately inspiring Saturday’s Bank Transfer Day.

One local credit union and bank are bracing for the coming migration, illustrating just how monumental some expect the migration to be in Richmond.

If you heard rumors that Bank of America was going to raise rates on debit card transactions, you heard right. But, after it learned a thing or two, the financial juggernaut changed its mind.

On October 1, Bank of America announced that it would charge customers a monthly $5 fee for debit card use beginning in 2012. Existing customers of the second largest U.S bank protested what they saw as excessive charges, especially after the company’s third-quarter profits reached $6.2 billion. Just this week, Bank of America cancelled its plans to implement the now notorious debit card fee, but not in time to save face in front of many of its customers.

Wells Fargo, the fourth largest U.S. bank (by assets) recently scrapped similar plans. The company announced that it would implement a five-state trial program wherein its customers in those states would be charged a similar $3 debit card fee. The company announced this week that it would abandon this initiative after customers demurred the proposed plans. Not to be outdone, SunTrust also scuttled a similar debit card fee plan earlier this week.

If the Bank of America fee was worrisome, the proposed Wells Fargo hit many Richmonders in a sensitive area. Wells Fargo completed their $12.7 billion acquisition of Wachovia in early 2009 before rebranding the existing Wachovia bank branches and ATMs throughout the Richmond region this August (to say nothing of their brief rebranding of the Richmond Times-Dispatch). Many local Wachovia customers were dissatisfied with the switch, while others complained for a variety of issues (read about some of these here, here, here, and here).

The now worldwide Occupy movement (it did begin as Occupy Wall Street, after all) transformed these grumblings into outright public scorn for large banking institutions. Chief among protester complaints is that the financial institutions that precipitated our global recession received public dollars from the Troubled Asset Relief Program (TARP)—money that the individuals who suffered from the banks’ malfeasance never saw. 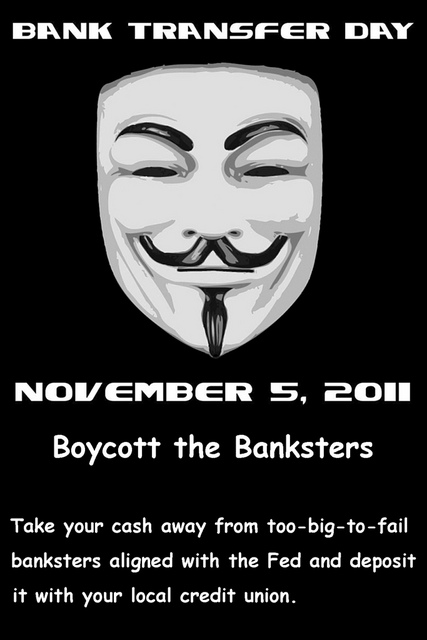 Meant to encourage disgruntled national bank customers to switch to a local option, Bank Transfer Day was scheduled for November 5. In 1605, Fawkes conspired to blow up parliament, hoping to subvert the country’s Protestant leanings and foist his Catholic theology upon the nation. He was apprehended by British authorities on the 5th of November, before being ultimately tried and executed. Traditionally, Britons celebrate Guy Fawkes Day by burning effigies to commemorate Fawkes’ capture and foiled plans. To some Americans, the November 5 date is a symbolic time for rebellious acts meant to undermine restrictions created by established authorities.

Bill Cimino, Vice President of Corporate Communications at Virginia-based Union First Market Bank, says that growing dissatisfaction with national banks has been good business. “We have seen an increase [in the number of new bank members across the state],” Cimino says. “Especially in the Richmond area.”

Disclosure: I bank at Union First Market. I transferred from Bank of America back in early 2010, inspired by the “Move Your Money” campaign that I originally read about on The Huffington Post. Although, I’ve been pleased with their service, I’m not shilling for them.

Union First Market has been advertising their free checking accounts for several months, so “we were a little bit ahead of the curve,” said Cimino about how they’ve responded to the concern over the national banks’ debit card fee proposals. Not only have new members been moving their money from national banks to Union First Market lest they run into the threatened debit card fees, but also because Union First Market loans only to the communities that the bank serves. Even after Union purchased First Market Bank in 2010, becoming the largest community bank in Virginia, the bank “never changed our community banking policies,” said Cimino. “We only loan in our footprint,” meaning that there are no loans given to anyone outside of Virginia. With 99 branches in the Commonwealth and 40 in the Richmond area, Union First Market is well positioned to adequately cover the banking needs of those Richmonders who are considering making the switch. Cimino also says that there are plans to develop Union First Market’s presence in “major population centers” in the future, chief among those being the Interstate 64, 95, and 81 corridors.

Unlike either national or local banks, credit unions are not-for-profit institutions. Each member of a credit union is considered an owner, although this serves as a more philosophical than practical distinction. Because credit unions don’t seek to make a profit, those behind Bank Transfer Day would prefer you opt to send your money in the credit union direction. And many Richmonders have already begun.

Glenn Birch, Public and Media Relations Director at the Virginia Credit Union, says that that there has been a “significant increase” in the number of new accounts during the first weeks of October. Being that these figures rose shortly after national banks announced their (later scrapped) plans to charge debit card fees, the uptick in VACU members certainly suggests that Richmonders are, at the very least, amenable to uprooting their existing bank relationship for a more dependable, local institution.

Birch also shed some light on the reason why larger, national banks are tempted to charge fees for debit cards and checking accounts, and that reason is called the Dodd-Frank Act.

The Dodd–Frank Wall Street Reform and Consumer Protection Act was passed by Congress and signed into law by President Obama in July 2010 (you can access a government-produced PDF summary of the legislation here). One of the legal provisions of the act stated that banking institutions must reign in interchange fees, relatively small fees (think a quasi-tax) charged to merchants whenever there is a debit card transaction. These fees help fund that banking institution’s fraud protection safeguards. The law allows the Federal Reserve to regulate these interchange fees so that they are “reasonable and proportional” to the cost of processing such transactions.

So. Banks that deal in assets over $10 billion (the Bank of Americas, the Wells Fargos, etc.) cannot charge fees at the same price that they used to. This loss of interchange fee revenue means that these banks must make up the difference through other means, hence new debit card and checking account fees.

Banks and credit unions that operate in assets under $10 billion (the Union First Markets, the Virginia Credit Unions, etc.) are exempt from this regulation. Therefore, they have no need to recoup lost revenue as a result of the Dodd-Frank Act, allowing them to maintain their existing fee-less services.

“We really don’t know how that will all play out,” says Birch about national banking trends and how they may or may not be affected by the Dodd-Frank Act. Despite this uncertainty, VACU has made “staffing adjustments” so as to be ready for Saturday’s Bank Transfer Day. “We welcome new members,” says Birch. “We want to serve those members well.”