The Chair of Friends of Chimborazo Park spoke to us about why he’s concerned about the planned farmers market.

Not everyone is excited about the new farmers market coming to Chimborazo Park.

Following the announcement that GrowRVA plans to hold a weekly farmers market in Chimborazo Park starting in June, Friends of Chimborazo Park, a non-profit community organization, expressed their concerns in a letter to Councilwoman Cynthia Newbille.

Here is the letter (click to view a larger version): 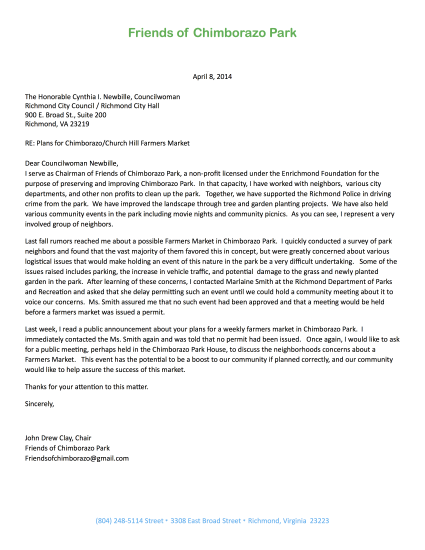 We contacted John Drew Clay, the Chair of Friends of Chimborazo Park and the author of the letter to Councilwoman Newbille.

According to Clay, the letter has been received positively by those involved:

Councilwoman Newbille and GrowRVA have both reached out to me in response to this letter and there will be a meeting of all interested parties and hopefully a more public meeting afterwards. I am a big believer in democratic processes like the open public meeting. The concerns involve parking and traffic flow…there is no public parking lot in [Chimborazo Park]. It is just a series of narrow streets. This leaves questions about parking and where vendors will set up. With 1/3 of the flat section of the park being owned by the National Park Service and therefore off-limits for events, that leaves the other 2/3 of the park. Then, when you factor in the areas that have been recently landscaped, the park shrinks even further.

East End Daily will continue to cover this story, specifically the date and outcome of any public meeting regarding the farmers market.