Andrea is 2013’s first named tropical storm, and she’s headed up the Atlantic coast. Expect your weekend to be wet and windy. 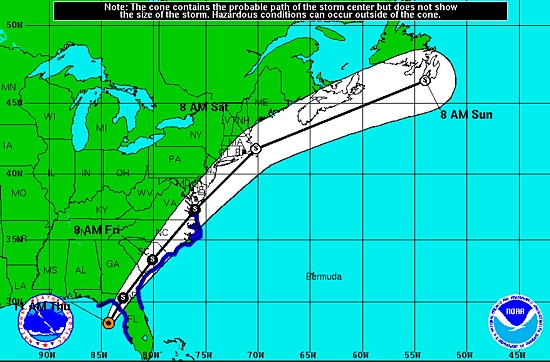 As far as impact on Richmond, Weather Dan had this to say on his Google + page:

For most of Virginia, Andrea is going to be a rainy nuisance more than anything else…Andrea’s track will bring the storm onshore in Florida today and begin to interact with the front tonight and tomorrow, leading to more widespread rain across the southeast and mid-Atlantic before losing tropical characteristics tomorrow. Rain will be widespread across Virginia Friday and Saturday as the storm moves off to the northeast.

Areas to the east of the center of circulation–primarily Hampton Roads, the Peninsulas, and the Delmarv–should be aware of a tornado threat, the storm has triggered multiple tornado warnings across Florida overnight.