On the evening of June 5th you’ll have your last chance to see Venus transit across the Sun from right here in Richmond. I have updated this article with some additional safety information. In short, do NOT use binoculars with solar glasses!

Open thine ears for I tell a tale of astronomical happenings that, were they to be missed, shant be seen again! Not in your lifetime or mine anyway–unless you’re planning on living to 135, in which case…good luck, I guess? I speak, of course, of the June 5th transit of Venus between Earth and the Sun.

Next Tuesday, Venus will pass directly between the Sun and Earth and will be visible as a small black circle on the Sun’s surface. It’s kind of like an eclipse on a small scale–small in a physical sense, at least, because such transits are quite rare and awesome. How rare? Well, if you miss this one, you’ll have to wait until 2117 to see the next.

For comparison, there are 2-5 solar eclipses (the Moon between Earth and the Sun) of some sort every year, and total solar eclipses, which are pretty rare in their own right, happen about every 18 months.1

The last transit of Venus was the first of a pair and occurred in 2004, this puts the next transit on the evening of June 5th or the morning of June 6th depending on your physical location on Earth. Here in the US we’ll need to be looking sunward on June 5th around sunset.

In order to see the transit, you’ll need to protect your eyes in the same ways you would to safely view a solar eclipse. You can accomplish this with some not-so-fancy eyewear to filter out the Sun’s intense radiation. Alternatively, there are several ways to view the transit indirectly using shadows and other such trickery (physics might as well be magic). You have plenty of options whichever route you decide to go.

When is it exactly, and will I be able to see it from Richmond?

Provided we aren’t hit with an unfortunately cloudy day, yes, most likely you will. Using the free and open-source application Stellarium, I was able to simulate the positions of the two relevant solar bodies and track their locations in the sky from our humble city on June 5th. You will need to find a place with a clear view of the western horizon, the more elevated the better. 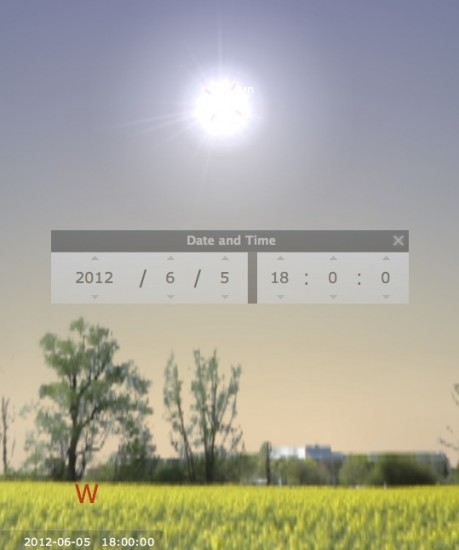 The sun relative to the horizon as the transit starts. 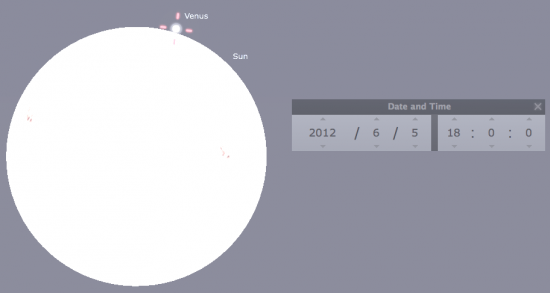 The transit will just begin at 6:00pm. 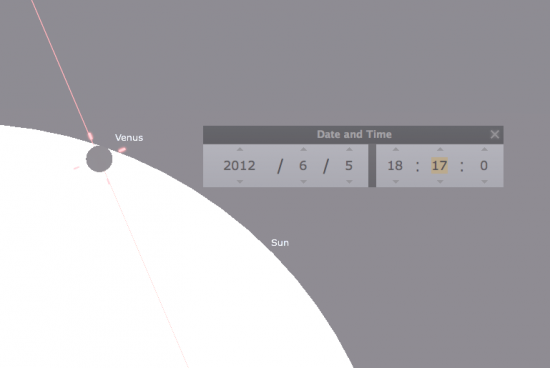 Venus will be fully within the Sun's disc starting at 6:17pm.

The transit will take nearly seven hours to complete and will continue for quite some time after the sun dips below our Richmond horizon. We should be able to watch it for a good 90 minutes or so–potentially up to two hours depending on how clear the sky and how elevated your watching spot.

Can I see it without binoculars/a telescope?

Yes. It’s on the low end of the resolution of the human eye, but you will be able to see it with your naked eyeballs–with proper eyewear for safety, of course.

Seriously, don’t ever look directly at the Sun.

The Sun’s unfiltered glare would make it impossible to see the transit anyway.

UPDATE: It has come to my attention that you should NOT use binoculars or any sort of magnification at all even with these sorts of solar glasses. Apparently you need much stronger filters to safely accomplish this. I repeat: Do not use binoculars to view the transit!

It was a very stupid assumption on my part not to research it properly as I’ve never viewed one of these events involving the Sun before. Then I read that “it will be like having the Death Star shooting directly into your eyes” and I knew I’d made a grave mistake. Even if you put the filters in front of the binoculars, it’s still a risky move, and you shouldn’t risk your eyes even for a once-in-a-lifetime event.

You can, however, use binoculars to project the Sun’s image onto a piece of paper.

Just don’t look through the binoculars yourself. Not even for a second.

Why should I care?

Aside from the fact that it was a transit of Venus that helped astronomers calculate the distance between Earth and the Sun in the 1700s, it’s a singularly neat event that practically no one who is alive today will be able to see again. To do so, you’d have to be about five now and then live to be 110, something only 0.1% of people who live to be 100 accomplish.

French astronomer Guillaume Le Gentil went to such failed lengths to see a Venus transit that he went temporarily insane and was “lost” for 11 years. When he eventually returned home he found that his government had declared him dead, his wife had remarried, and his relatives had “enthusiastically plundered his estate.” If nothing else, do it for Guillaume.

What if I miss it?

Well, you’re SOL, unfortunately. If clouds are forecast for the evening of June 5th and you really want to see it, you’re gonna have to hop in your car and drive for a couple hours until those clouds disappear.

However, on November 10th, 2084, the Earth’s transit across the Sun will be visible from Mars. That’s far enough in the future that we might have been colonizing Mars for awhile by then. If you miss Venus’s transit, maybe you’ll live long enough to survive the trip to see Earth’s!

Anything and everything I didn’t cover here should be available over at the transitofvenus.org Internet website. Between that and Wikipedia, you should able to learn everything you could ever want to about this rare event.