Despite the James River’s value, litter is an inescapable problem from shore to shore. The problem extends beyond the borders of Richmond’s parks, but progress starts on the river this weekend. It’s a cloudy, but beautiful Wednesday afternoon on Belle isle and a few people are basking in the the partial sun–far fewer than on a Saturday (there’s less beer too). When the park’s nearly empty this secluded urban wilderness shines, but it’s impossible to avoid the constant reminders of the park’s most invasive species: the litterbug. 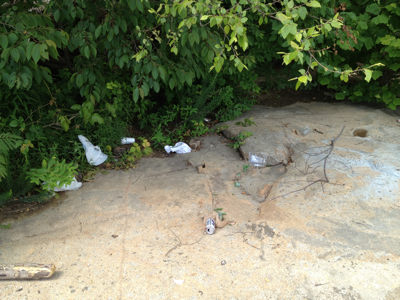 From Christopher Newport and his journey to Richmond in 1607 to modern river rats paddling kayaks, the James River has always been an important part of Richmond with enormous value and endless potential. It is the city’s greatest equalizer as people from all walks of life congregate in a unique wild oasis not found in many other urban environments (if any). Even just a few weeks ago, the river played host to the nation’s largest outdoor sports and music festival. Despite the river’s value, litter is an inescapable problem from shore to shore.

Litter finds its way into the river in two ways: 1) people drop it there 2) it gets carried there by runoff. Like a mountain stream to the ocean, trash has the incredible ability to find its way from the fringe of that Walmart parking lot in Buchanan, Virginia, to the Great Pacific Garbage Patch almost a world away. Over the course of a year, 6.4 billion tons of plastic end up in the ocean and there’s now six times more plastic than plankton in the fives seas. The problem extends beyond the borders of Richmond’s parks, but progress starts on the river this weekend.

This Saturday (June 9th), for the 13th year, the James River Advisory Council will put on the annual James River Cleanup. Volunteers at 13 sites from Lynchburg to Charles City County will scour the river and its tributaries in an attempt to offer park-goers and the river’s delicate ecosystem a brief respite from petroleum based products and cigarette butts.

Cleanups are important, but they only treat the symptoms of the larger problem. Kim Conley from JRAC is aware of this and further steps are being taken:

Education is a key part of what we do, and we work to educate all of our volunteers about how litter gets into the James River. Much of it is litter that has been left in parking lots and thrown out along roads. Rain runoff carries that litter along the ditches and through storm drains to tributary creeks or streams where it is then carried downstream to the James. The key to preventing it is understanding that litter inappropriately discarded miles from the James River can end up in the river over time.

Richmond already is a shining city upon a hill, JRAC is now leading the battle to maintain a pristine river below that city:

JRAC envisions a future of heightened awareness about the James River and its tributaries among people throughout the region. Ideally, we want to see a time come when there is no need to hold a large-scale river cleanup and a time when our river, streams and adjacent areas are completely healthy. JRAC’s slogan has been: “It’s your river. Enjoy it. Take care of it.”