The future view from Legend’s deck.

Cushman & Wakefield and Thalhimer have released marketing material that gives us a better vision of what is planned for the empty acres of land next to Legend. A pair of 15 story mixed use high rises are planned, three of those floors will parking decks. Mead Wevaco across the river comes in at 9 stories.

They’re pitching the site as having 500,000 square feet of development potential. Richmond BizSense.com has details on the deal and for more pictures check out the marketing material.

Thalhimer broker Jeff Cooke said the overall development could total more than $100 million in renovations and new construction at one of the city’s largest tracts that has been untouched by the downtown development drive.

“In a city like Richmond that is mature, there are very few open pieces of land like this,” Cooke said. 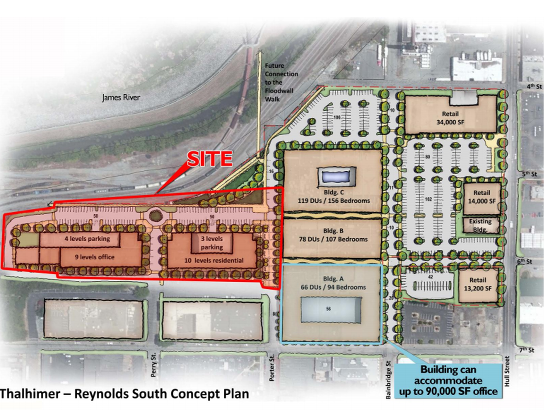 Photos by: Cushman & Wakefield and Thalhimer