Get to know your city government with RVAGOV

What does the School Board do? How’s the budget created? What’s the difference between an ordinance and resolution? “We got a shout-out at the last Richmond City Council meeting,” said Ben Panko, a journalism student at the University of Richmond and co-editor of RVAGOV. Two council members even offered their own suggestions. “Charles Samuels [District 2] and Parker Agelasto [District 5]…met with us and offered advice on the website.”

Billing itself as a “hub for engagement in Richmond City government”, RVAGOV explains how City government works,1 as well as previewing and recapping Council meetings (and soon School Board meetings).

“We realized that a lot of people want to be involved in the democratic process, but they may not have the time to go and dig through ordinances and codes to try and figure out what exactly what is going on, or what is being debated at tonight’s [City Council] meeting,” Panko said. “We’re not trying to dumb it down for people, or tell them what they should think about ‘this’, we just want to make it as easy as possible for any citizen who wants to participate to be able to participate.”

RVAGOV is the idea of UR student Peter CampoBasso. He was in a class taught by Thad Williamson called Research Workshop on Contemporary Richmond Politics. Students were required to attend City Council meetings.

“When I went to the first one, I found it quite difficult to follow, and I had no idea of what was even being discussed,” said CampoBasso. “The next day, I…decided to start working on a City Council guide.”

“I at first envisioned it to just be a simple guide to City Council to outline for students things like the meeting procedure, basic powers and duties of the Council, the difference between an ordinance and a resolution, etc,” he said. Eventually he got the idea for a website that went beyond a Council explainer.

He spent this past summer developing the website with fellow UR student Andrew Talbot. “At first, we viewed it as just being for students; we thought that it would be a useful tool for professors who were sending classes to City Council meetings, and for students who were interested more broadly in government to more easily get engaged,” CampoBaso said. “Then we started to think that it could be used by the greater community as a whole once we started adding certain sections.” 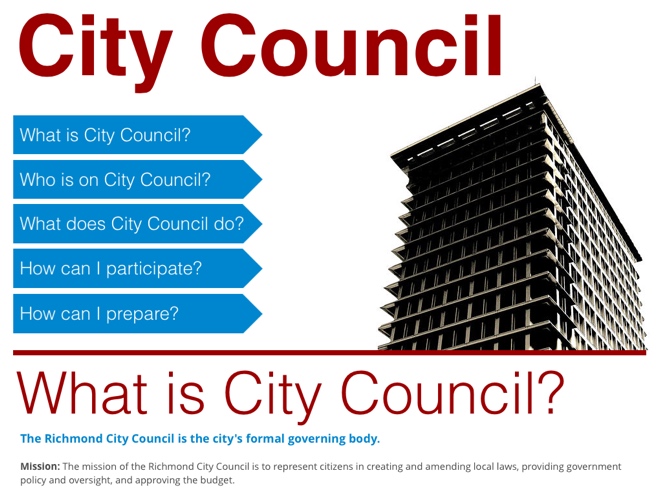 Ben Panko said a hallmark of the website2 is its minimal aesthetic. “We definitely strived from the beginning to keep it as clean and simple looking as possible,” he said. “We wanted you to be able to click around the website in as few clicks as possible and be able to get to everything important really easily.”

Panko said the site’s easy navigability shouldn’t shame the City’s official website. “I don’t think that they would be able to have the same kind of website that we do,” he said. “They have a lot more stuff that they have to include. And we have the luxury on focusing on, very narrowly, a few things.”

RVAGOV will eventually expand those things now that the site’s wrinkles are nearly ironed out. “We’ve been focusing on the content of the website and just the mechanics of it. And now we’ve gotten those mostly figured out, starting next semester is when we’re going to be able to work on fine-tuning stuff and adding features,” Panko said. RVAGOV staff have discussed including maps and graphics.

But new features aside, what happens when Panko and the other editors and contributors graduate next year, and possibly leave Richmond for good? “We have a good team of correspondents working with us right now, and any of them could definitely run the website well,” Panko said. While there’s no transition plan in place, he’s confident the site will endure.

“We’re going to try and keep working on it, improving it,” Panko said. “I hope that citizens and students, and anybody who’s interested in it, will be able to get good use out of this website.”