A look at Lumpkin’s Jail through newspapers of the time.

Fit to Print is a blog by the Library of Virginia that dives into old newspapers articles to provide insight into significant historical events, everyday life both serious and silly.

A post from earlier this week definitely falls on the serious side of the spectrum,  MY HEART WENT RIGHT DOWN–THE DEVIL’S HALF ACRE AND THE RICHMOND SLAVE TRADE. As you can probably guess the post focuses on Shockoe Bottom, the slave trade and specifically Lumpkin’s Jail.

Together, the documents of the time create a more complete, deeply layered account of those directly involved in and affected by Richmond’s slave trade: Like Robert Lumpkin, one of the city’s most active slave dealers from the 1840s until 1865. And Anthony Burns, a slave who escaped to Boston, only to be captured and returned to Virginia under the Fugitive Slave Law.

The storied land that was home to Lumpkin’s Jail, aptly called the Devil’s Half Acre is, today, mostly covered by a sprawling parking lot and interstate 95. But from 1844 until the end of the Civil War, it was “a human clearinghouse and. . .purgatory for the rebellious.”

The newspapers clipping bring to life the harsh realities of what life was like at the time and leave no doubt on how other humans were treated. What is interesting about the blog post (linked above) is that it gives example of articles from both the north and south giving a much better perspective on what it was like to be living in that time. 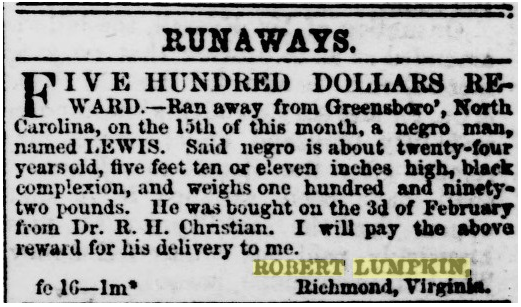