Property rights, blighted homes, and tax credits all converge at this 100-year-old home. The house was so bad, Jeremy Williams and his wife had to sign waivers just to step inside.

When they did, they saw beds, furniture, filing cabinets, shelves, dishes, and everything else you could pack into a row house and leave untouched for 10 years. “Most of the rooms you could barely walk in to,” Williams said. “We didn’t even know how many fireplaces the house had because there was so much stuff.” (See gallery below.)

But with an asking price of $250,000, the house was a steal by Fan standards.1 Williams and his wife fought a competing bid and eventually purchased the home at 2103 Grove Avenue for $268,000 back in September.

Williams and his wife aren’t flippers and had no expectation of buying a condemned and boarded up home. “We’ve been looking for a house in the Fan for quite some time now, and the market’s been pretty hot,” Williams said.

Their new crib came to them while out for a morning walk. “We were out for a walk on a Sunday morning and we walked by this property on Grove and saw that it was all shuttered up; had notice from the City saying the building had been condemned and no trespassing,” Williams said. “We said to ourselves, what a shame that there are properties like this in The Fan just sitting, condemned, and that there’s nothing that can really be done about it.”

The next day, the couple’s realtors, Bobby + April, took a call from an agent asking if the realtor team knew of any interested buyers for a bedraggled property at 2103 Grove Avenue. “It was a fortuitous thing,” Williams said. “We had seen it, thought it was a shame it had been sitting, and sure enough a day later, an agent had called…about potentially buying it.” 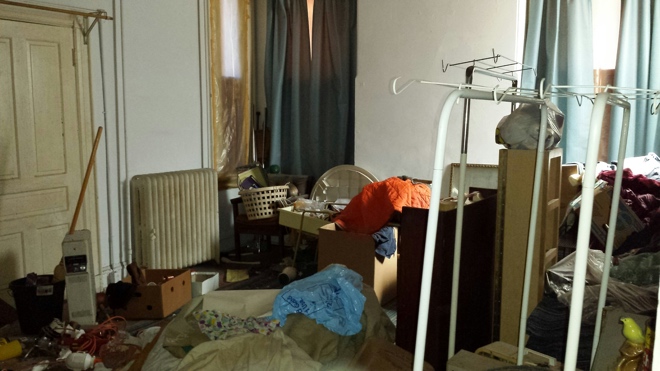 Turns out, the couple knew someone who once lived next door to the abandoned house. “As I understand it, the owner of the house used to live in Richmond and the house was used, up until around 2004, as a boarding house,” Williams said. “He had put up some false walls, done some installations of electrical outlets that weren’t up to code, had separated the entrances so he could rent it out on a room-by-room basis.”

So how does a condemned property stand for a decade, especially in an area as charming as The Fan? “As far as we can tell, [the previous owner] continued to pay property taxes on the house, maybe thinking he’d one day fix it or sell it,” Williams said. “That’s why it never went into a tax sale.”

Condemned homes in The Fan are by no means a pandemic (you can count all of them on one hand), but they aren’t unheard of either, said Roger Whitfield, former president of the Fan District Association (FDA).

“The recourse that we have in dealing with situations like that [is little]…it is very difficult to intercede,” he said. “The property rights laws really work against a neighborhood trying to affect a change.”

A Fan resident since 1980 and FDA president in 2012, Whitfield said blighting properties are often untouchable, so long as taxes are paid. “If the owner of the property decides he doesn’t want to do anything, his rights are respected and upheld,” he said. “It’s a very convoluted and difficult process to interfere with an owner’s property rights.”

But while the FDA finds the few condemned properties that sit untouched for years on end troublesome, Whitfield said the FDA faces a more acute issue. “The bigger concern is the possibility of these properties being demolished,” he said. For every house demolished within its neighborhood, the Fan loses a bit of its history and the “integrity of the neighborhood is threatened.”

As history goes, most of what Williams and his wife know about their new home from comes from Drew Carneal’s Richmond’s Fan District. “The house was built in 1897 by the West End Land Company,” Williams said. A new neighbor, VCU professor Dr. Charles Brownell, told the couple he believes famed Richmond architect D. Wiley Anderson designed the house.

Although the $268,000 price tag is cheap compared to other nearby homes, the couple must now wade through contractors, permits, and the expense of refurbishing a home.

But some of that cost can be avoided with a state tax credit through the Department of Historic Resources based in Richmond. “They offer 25 percent of your hard renovations cost back as a tax credit,” Williams said. “Basically you have to renovate these houses without disrupting the original appearance of the house, and you have to do it as period-correct as possible.”

But meeting those historical standards are difficult. For instance, per the requirements, the Williams would need to use plaster walls to repair the existing plaster damage “rather than put something more energy efficient like drywall,” Williams said. They’d also have to use the same windows (unless they’re irreplaceable), the same front porch design, and even the same layout of the home.

Those requirements were a nonstarter. “The incremental cost of complying with the historic tax credit program2 was going to be more than the value we were going to receive,” Williams said. “I think it’s a little cumbersome to try and comply with it.”

However money isn’t the only thing that drove the couple to buy their new home. “The ability for us to go into a house that’s over 100 years old and design it, set it up, and put in the flooring, fixtures, and the toiletries, and everything that we want to in the house…[is] a once in a lifetime opportunity,” Williamson said.

The couple hopes to move in by the end of the year.