Three Dudes and a +Pool

Never thought you could go swimming in a body of water that was within a body of water? Crazy, I know. But if three young men get their way, you’ll be able to do exactly that. On how a clever idea may soon hit the Big Apple and how Richmond will play a part.

On the surface, it doesn’t seem like much. “Three young dudes trying to build a pool,” says Archie Lee Coates. But there’s more to it than that–just over $30,000 has been raised in just about a week. Oh, yes. Much more, indeed.

This pool is no ordinary pool, because no ordinary pools are in middle of New York’s East River. It’s been mentioned on Gawker, the Huffington Post, and even Yahoo! News. But what Dong-Ping Wong, Jeff Franklin, and Coates have yet to do is far more impressive than what they’ve done thus far.

What they have done is built upon an idea that Wong had last year amid a broiling New York City summer. Wong, who founded the New York-based Family architecture firm in 2008 to “determine more optimistic and productive typologies of ecological building,” wanted to go swimming in a pool.

Coates says that Dong “brings really rad ideas to life.” For this, however, Dong worked with Coates and Franklin, co-founders of PlayLab, also New York City-based, to bring the pool to life.

The premise is simple. Resting in the Hudson River, the pool would draw upon the River’s natural supply of water and then filter it, thus providing the public with a healthy, uncontaminated recreational water source. 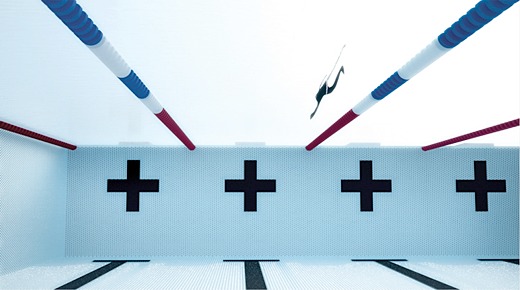 The trio came up with the design for the pool while sitting outside a coffee shop. Looking upon the street intersection, they realized that the plus sign was an iconic shape, evoking both New York City life and a positive environmental addition to it: +Pool (plus pool) For an entire month, the trio worked on nothing but the designs, diagrams, and schematics to generate interest. “Within a week the feedback was amazing,” says Coates.

The trio then got in touch with Jason Lefton, who owns GYLo, a media content generation company based in Richmond. Lefton founded GYLo in 2006, although he had been doing freelance work since 2003. “They have always gone after projects,” says Lefton of the designing trio, “with learning curves that they’re not afraid to climb.” Lefton, of all people, would know. He and Coates grew up in Virginia Beach. After Coates graduated from Virginia Tech in May of 2006, he moved to Richmond. For a time, he lived with Lefton. “It was a great place to start a life,” says Coates of Richmond. He worked at The Drama, a now discontinued magazine for contemporary art while living here.

In February 2007, Coates moved to New York City, where he is now and where +Pool hopes to break, er, ground. “One of the misconceptions,” he says, “is that it’s a city initiative.” Not so. The pool is an independent endeavor, relying on Kickstarter to help raise funds to develop the first of three filtration components. “We need to prove that it works,” says Jeff Frankin. They’ve been working with ARUP, an engineering consulting group, who they asked to first ascertain if the project was feasible. Very much so, was ARUP’s response. Since then, the trio has sought to fund the technical testing phase. As of this writing, they are roughly $5,000 over of their original $25,000 (in the 25 minutes we spoke on the phone, they had received four new backers, who pledged a combined total of $100). If they raise $500,000, they anticipate constructing a full scale, fully functional section of the pool. This would be, what Franklin calls, a “game changer.”

Much needs to be done beforehand. There is bureaucracy to navigate, permits to obtain, and testing that needs to be done. The three are confident, however, that they will all be done. Just steps that three dudes must take to build their pool.

+Pool from GYLo on Vimeo.