Dip your toe into the calming waters of mindfulness

You—yes, YOU—can learn things about yourself, discover ways to stay centered, and apply all this calmness to all aspects of your life. And you can do all of this right in the middle of the RTD building, without donning a pair of yoga pants. It’s hard to sell meditation, yoga, and mindfulness stuff to certain types. Action-oriented people often have a hard time seeing the value in a really big pause. Why sit around and think about nothing when there are Things to Do and Places to Be and Checklists to Obliterate? I am one of those people and feel levels of anxiety ranging from a low buzz to a loud clanging when it feels like nothing is getting done.

Yet, as many, many people have already figured out, setting aside time to check in with yourself can make your productive times even more productive. And all that buzzing and clanging might just ease the heck off. Glowing serenity doesn’t have to be reserved for yogis–and that’s what Floricane and the Chrysalis Institute have partnered together to offer to you for the next three weeks.

The Summer of Self-Discovery is an annual Floricane thing, but this year, owner John Sarvay decided to break free from his normal leadership and teamwork focuses, and allow us to truly get self-centered. But, like, in the most wonderful way. 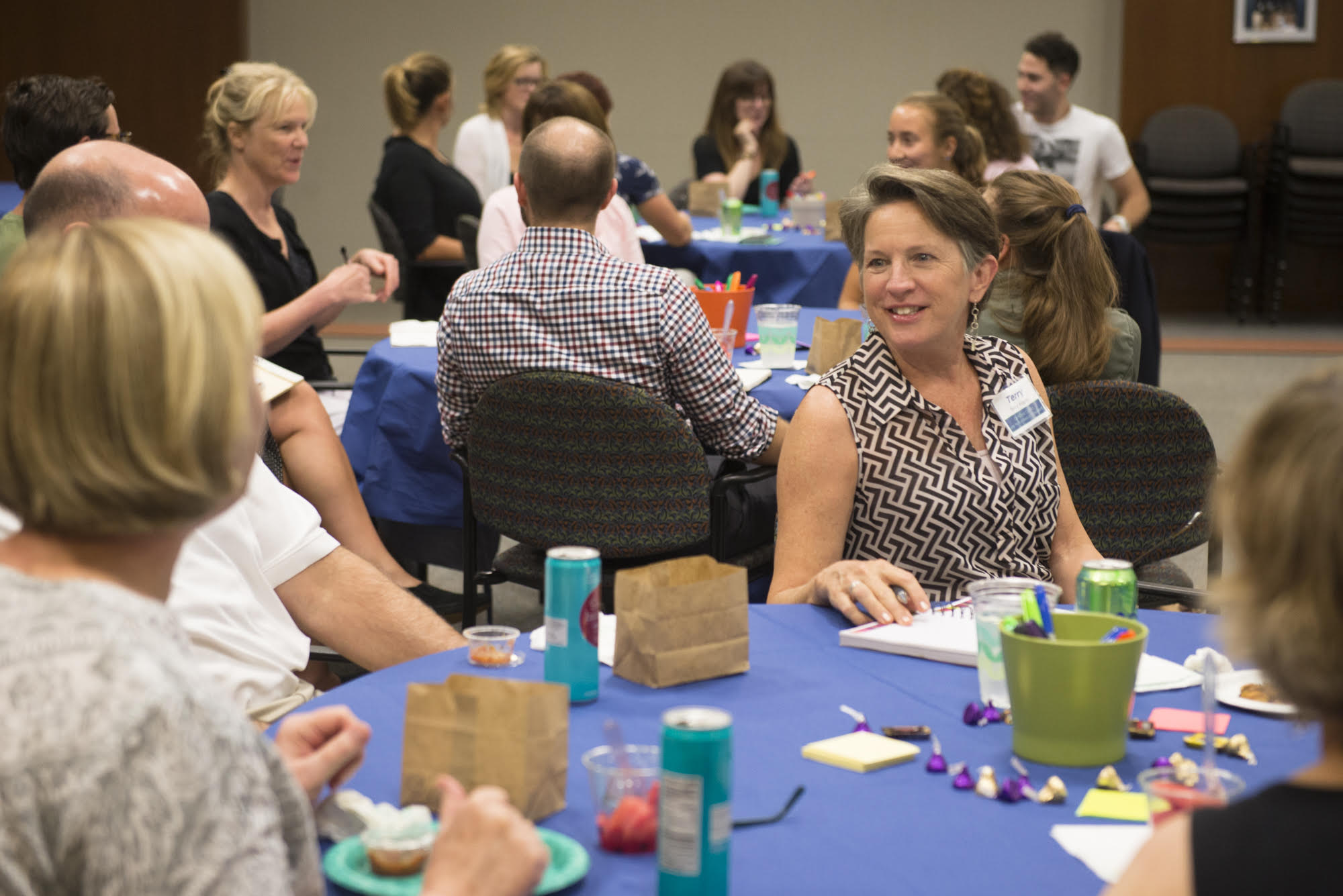 “Summer of Self-Discovery has always been designed to be non-salesy, non-business-developy,” says Sarvay. “But just to be a place where people can find out things about themselves.” This time around, he took a long Carytown walk with Rachel Douglas from Chrysalis, and together they came up with a loose idea for what the series would be. It’s loose by choice, so that no one would show up expecting an intensive session–and also so no one would be scared away.

I attended the first in the four-part series, which promises different programming every week, in case you’d like to drop in once or twice or commit to the whole shebang. My experience with yoga and meditation have been scattered but 100% positive, and I’ve always wanted to learn more. But, you know, those checklists.

This Tuesday, other interested parties and I assembled in the Richmond Times-Dispatch building for a 4:00 PM seated/standing yoga session with Kelly Trask to kick off the evening. I panicked about what to wear for a few minutes that day, and was assured that I could show up in whatever I wanted and count on being accepted. In the end, I decided to take them on their word and resist the urge to change out of my shirt-and-skirt work getup. And everything was fine. Kelly took us through some breathing exercises and poses, asking us to pay close attention to what was going on within our bodies and our minds. 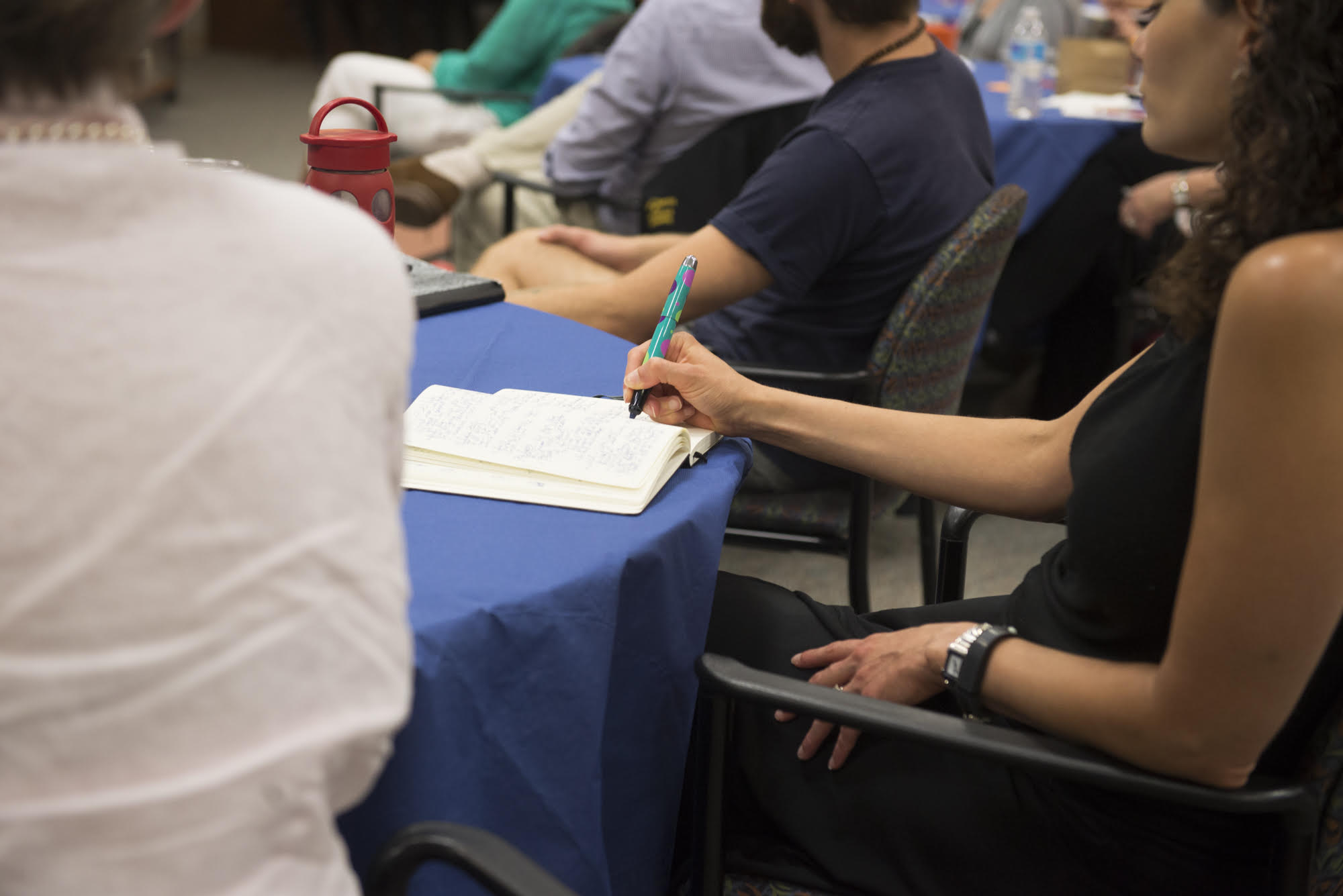 Even though I had already gotten chatty with the others seated at my table, I still had a fleeting “I feel dumb” thought, but soon realized the best part about the event–everybody who signed up really wants to get something out of it. In other words, no one was dragged there by their boss as part of a team-building exercise. The room was full of people who were not there to judge you, but there to get their own serene glow.

That “non-judging” aspect turned out to be a theme, and a useful one. Alex Peavey, the evening’s speaker, hails from Collegiate, where he works with students to teach mindfulness at varying levels. He told us how he got into the subject as a teenager, when he read Sacred Hoops by basketball coaching legend Phil Jackson. “At first I was annoyed because I thought I was reading a book about basketball,” said Peavey of his 15-year-old self. The book related Johnston’s Zen approach to keeping your head in the game–an approach that has benefited players like, oh, Michael Jordan and Kobe Bryant. “Then I realized I was reading a book about basketball.” 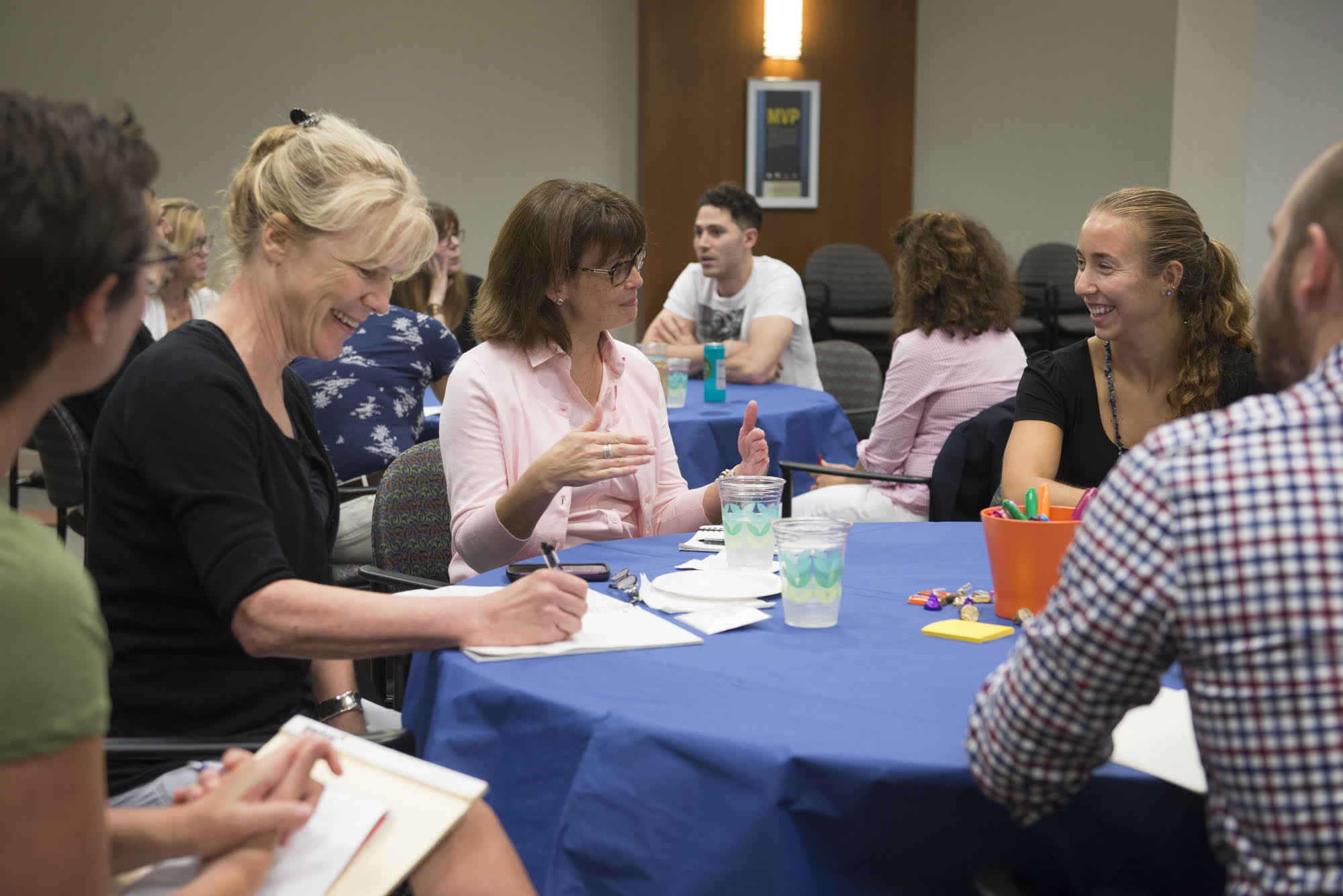 What Peavey means is that mindfulness is a study and a practice that can prove useful in literally every single thing about human existence (my words, not his). He took us through the seven attitudes as laid out by Jon Kabat-Zinn, and you could see the realization dawning on faces around the tables. Looking at things through a “beginner’s mind” sure does sound more fun than resisting things you’re tired of doing.

After a break filled with almonds, raisins, and flavored sparkling water (my favorite kind of break), we moved onto the Chrysalis Institute’s Carol Jacobs cut the lights, started the mood music, and asked us to close our eyes. This was the part John Sarvay was a little unsure of. “I’d been in organizer mode during the first half,” he said afterwards. “And I worried that people would think the music, etc. was stupid, but then suddenly my switch flipped and I was at my uncle’s river house at the age of seven, lying on the blue couch reading with a bag of candy next to me.”

Carol Jacobs has not learned how to bend space and time (that I know of), but her guided imagery meditation led us all to our “safe places” inside our minds. And the results, according to a lot of people afterwards, were surprising. Once there, we “had a dialogue” with ourselves–not literally, but more like “What does it mean to me that I’ve chosen this particular spot as my safe space?”

Guys, it sounds like mind-bending wizardry, but it brought out some really interesting things. It was jarring to be brought back to drop-ceiling, fluorescent light reality, and everyone agreed that they wished it had gone on indefinitely. Checklists, be damned, I have introspection to do.

Find out more about the Summer of Self-Discovery, (you can also just walk in–300 E. Franklin Street) which takes place on July 28th, August 4th, and August 11th (all Tuesdays at 4:00 PM) and purchase tickets online ($25 per session). You will almost certainly find it pleasant and useful, and maybe even life-changing.