“Each pair of boots bears the name of a soldier, sailor, marine, or reservist killed in the wars.” On October 1st you may notice as you walk or ride past Monroe Park 206 pairs of boots on display. Each pair of boots represents a Virginian killed in either the Iraq or Afghanistan wars. The purpose of the display is to give a tangible feel to the numbers lost and reflect on what price we as a country are willing to pay going forward.

On October 1st, as the United States stands poised to renew its involvement in Iraq, the Richmond Peace Education Center will hold an exhibit designed to promote somber reflection about the human cost of our recent wars to the commonwealth of Virginia.

The Eyes Wide Open Virginia exhibit symbolizing U.S. servicemen and women as well as Iraqi and Afghan civilians killed in the Iraq and Afghanistan Wars will be on display 11am to 6pm, Wednesday, October 1 at Monroe Park.The public is invited to view the exhibit and respectfully consider the effects these wars have had on our countries.

“Eyes Wide Open Virginia: The Human Cost of the Iraq and Afghanistan Wars” focuses specifically on the costs of war to the Commonwealth. Eyes Wide Open Virginia includes a simple, respectful display of 206 pair of boots representing military casualties from Virginia (134 in Iraq, 72 in Afghanistan). Each pair of boots bears the name of a soldier, sailor, marine, or reservist killed in the wars. 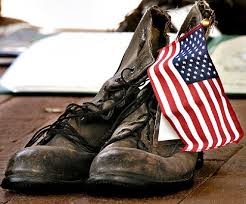 The display also includes an array of shoes representing Iraqi and Afghan civilian deaths, which have been credibly estimated to range from 100,000 to more than one million. The display represents a fraction of those civilian deaths.

During exhibit hours, the names of Virginian soldiers, as well as Iraqi and Afghan civilian casualties will be read aloud.

The goal of the exhibit is to put a human face on the casualties in the wars by spotlighting the deaths of U.S. soldiers and the civilians of Iraq and Afghanistan.

Virginia’s Eyes Wide Open is modeled on the American Friends Service Committee’s (AFSC) nationally touring exhibit. AFSC, an international social justice organization, created Eyes Wide Open to illustrate the lives lost in the war in Iraq and Afghanistan. The national exhibit now includes more than 6,000 pair of combat boots representing U.S. military casualties, along with over 3,000 pair of shoes memorializing a small fraction of the Iraqi and Afghan civilians who have been killed in the conflicts.

Families of the military casualties have been invited to add to the boots small memorabilia, which now form part of the exhibit. The national exhibit of Eyes Wide Open premiered in Chicago’s Federal Plaza in January 2004 with 500 pair of boots.

Visitors to the national and Virginia exhibits have found “Eyes Wide Open” to be a moving and even transforming experience. In any case, “Eyes Wide Open” presents, in a personal and profound way, the inescapable wartime reality of lives lost and families wounded.