There was a pre-game show tonight. Scott Burger and Sierra Club supporters showed up early to protest Richmond’s water rates outside of City Hall. Other than that, business as usual. There was a pre-game show tonight. Scott Burger and Sierra Club supporters showed up early to protest Richmond’s water rates outside of City Hall. It was a decent turnout, as these things go, and local TV, the RTD, and RVANews were there to cover it. They would carry their message inside City Council later. I’ll have more detail when we get to it. 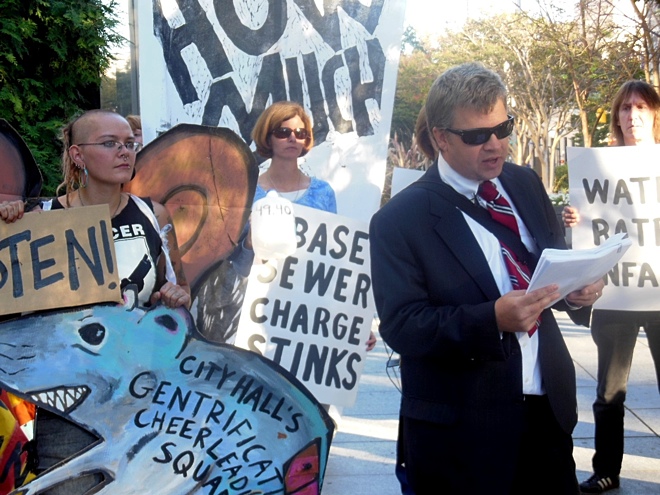 Inside, the Council is wrapping up its Informal Session. Marty Jewell was steamed when he learned papers he submitted in August could not be heard till December. Council bylaws prevent members from introducing papers that benefit their own district 90 days before the election. Since Council didn’t meet in August he missed the deadline; Doug Conner was in the same boat. It was Reva Trammell who insisted on going by the book, and in the end both continued their papers till next year.

In between sessions the chamber emptied. For a short while you could hear a pin drop, but soon the demonstrators and other spectators file in, and the Regular Session begins. It’s a very light agenda tonight. By the time they’re through amending it there are no items on the Regular Agenda and a dozen or so left on the Consent Agenda. There’s a full slate of speakers though, to fill things in, and Marty Jewell held in reserve, just in case.

Before things get started, Council celebrates the 100th birthday of Mr. Edgar Duffy. Mr. Duffy served as Assistant City Clerk from 1943 till 1974 and then City Clerk for another 10 years, almost 1,000 meetings exactly. Oh the stories he could tell–Mr. Duffy, you deserve a medal.

Now for Citizen Comment. First up, Charles Poole of the Sierra Club addresses Richmond’s high water rates. This is the second time in three months this has come up. In between, an online petition has gathered 1,300 signatures. The soft spoken Mr. Poole asserts that Richmond’s water rates are among the highest in the country and unfairly burden the poor and the elderly, that funds are being diverted from infrastructure repair into the General Fund, and that water was being sold to Henrico County at the expense of Richmond residents. As happened previously, this sparks a impromptu hearing called by a skeptical Marty Jewell. The short of it is the City maintains their rates are not only NOT the highest in the country, but not even the highest in the state and has a “lifeline” rate and will work with citizens to keep their water on. The City Administration is genuinely put out by this and the Mayor has issued a statement saying as much. Expect all of this to come up again early next year.

Other speakers include Rick Tatnall, city activist and former Mayoral candidate, speaking about the Richmond Open Government project. So far they have nudged the City to archive video of Council meetings on the City website. They are just getting started. You can read more about that here.

Eric Brown spoke in favor of education reform quoting Dr, Seuss, “Unless someone like you cares a whole awful lot, nothing is going to get better. It’s not!” His point being, “Don’t teach kids to take tests, teach kids to think.”

Now on to real legislation.

Only one of the items on the Consent Agenda would generated any discussion and that was to “authorize the acquisition by gift, purchase, condemnation or otherwise, with any condemnation to be in the manner prescribed by Richmond City Charter § 18.03, of permanent and temporary easements on the properties known as 6001 and 6007 Hull Street Road for the purpose of the realignment of Hull Street Road, Hey Road and Derwent Road.” I couldn’t have said it better myself, no really. The drama is provided by property owner, Lena Haas, who is here with two of her four kids to plead her case before Council. Haas is worried about flooding on her remaining property and the safety of her family. Doug Conner says not so. The property has been the subject of long fruitless discussion and Councilman Conner is ready to move on. Not so fast say Trammell and Jewell who are apparently hearing about this for the first time. Bowing to Council etiquette, Mr. Conner agrees to continue this two weeks when he promises the exact same impasse. That said the Consent Agenda is whisked away, 9-0.

That leaves one expedited paper presented by the Administration renewing the Southside Enterprise Zone which must be approved by October 1st, meaning tonight. Council is none too amused. One of their pet peeves is last minute legislation from the Administration. Now here’s a 65 page ordinance that no one has seen. Ordinarily this would be a routine matter, and Council understands this is due to last minute changes by the State. After some speed reading, they pass it, but not without some gentle chiding. Kathy Graziano gives one of her “school marm” looks and says “Please don’t do this again.”

We’re now done with business, on to the District reports, and I’m off to the races. In spite of all the hubbub, tonight’s meeting is just short of two hours.