I’m often asked, “Paul, you just make this stuff up, don’t you?” Sometimes I get the same question from my editors here at RVANews and my answer is, “No, I don’t have to, this stuff just writes itself.” While the opinions are my own, everything I say that happens here really did happen. I’ll swear by it.

I’m often asked, “Paul, you just make this stuff up, don’t you?” Sometimes I get the same question from my editors here at RVANews and my answer is, “No, I don’t have to, this stuff just writes itself.” While the opinions are my own, everything I say that happens here really did happen. I’ll swear by it. Some stuff you just can’t make up. So here’s what happened Monday night, as it happened, and I’ll fight anyone who says different.

Funny how these meetings take on the familiar quality of a rerun or remake. It’s not quite Groundhog Day–the cast and plot change a bit each time–but it’s close. Tonight, members of Occupy Richmond are back to address the City Council. Last session they took eight of ten slots in the citizen comment period. Usually there are no more than six.

Let me say this: I love citizen comment. I used it to make my first public speaking appearance some eight years ago. Since then the thrill of facing the cameras and public scrutiny have worn off, but I have fond memories.

In my present capacity, Citizen Comment is less attractive. Often you see the same people saying the same things. Of late, President Graziano has been juggling the agenda, putting this portion after the regular business of the Council. This caters to those here to address specific agenda items, but often means that citizens speak to an almost empty chamber as late as nine or ten o’clock. Should you want to participate, you merely have to call the Office of the City Clerk and put yourself on the rotation. I recommend it for anyone who has the stamina to wait their turn. I also recommend bringing a sandwich and a drink.

Our maverick councilpeople have been busy since last time, mostly enacting their revenge on the Mayor. Councilwoman Trammel has kindly encouraged Occupy Richmond in their siege of Mayor Jones house. I assume they’re still at it after celebrating Thanksgiving with Richmond Free Press publisher Ray Boone. Mayor Jones declined his invitation.

Councilman Jewell has also been having a grand time sticking it to the Mayor. His latest brainstorm is to designate a city park as a free speech zone that can be occupied 24 hours a day–no word on which park he’s picked. Byrd Park would be the appropriate choice since it’s in his district. I think it only right that he should follow Councilwoman Trammel’s example and share the burden with his constituents.

We say our prayers and our Pledge as Kathy Graziano brings the meeting to order.

Act I: The Awards

Aids Awareness Day –There is a big red umbrella event down by the River, and for a moment I thought we were all going to get free umbrellas but there were only nine–one for each Council member.

Fan Free Clinic–For all you do, this award’s for you. 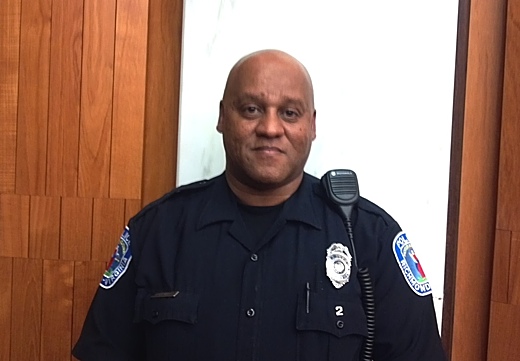 Lot’s of hugs and smiles for deserving people. Then there is Richmond Police Officer Jerry Carter who is saluted as a hero. By being in the right place at the right time, he was able to save a little girl from a predator. He accepts the praise with his head down, then turns away without saying a word. Applause follows him out the door.

As the awards are presented, the crowd drifts away. The chamber is now heavily weighted to the right, not politically, but physically. Regular readers will understand why.

There are competing redistricting plans, one by Vice President Robertson and one by Councilman Samuels. This is important to me personally as they may slice me out of my council district.

The neighborhood has turned out in almost equal numbers both For and Against. As is customary Against leads off.

Speaker One: Respect the character of the neighborhood. VCU is trampling on the rights of its neighbors. She has a point, they do that a lot. It will be interesting to see if Councilman Jewell votes “for the people”, meaning against the project, or for the project like he did when he voted for another similar Carver project, Sylvia Place–which had significant opposition from the neighborhood.

Speaker Two:–Build affordable, single family housing instead of huge dorms. Students are described as loud, rude, stay up all night, and piss in your rose bushes.

Speaker Three:–Touting the benefits of local businesses, the speaker decried VCU’s patronage of franchise restaurants with their fried chicken and creamy coleslaw.

At one point when President Graziano tried to maintain order over the Occupiers, Marty Jewel came to their rescue by shouting her down–the worst breach of etiquette I’ve seen in 10 years.

President of CACIL–The lot in question is ugly, zoned for commercial use, and surrounded by chain link fence and razor wire. The developers have revised plans accommodate the neighborhood that do not impinge on the neighborhood.

The project is behind the Siegel center and is a private development open to non students and designed to blend with the neighborhood.

Students are moving to Carver whether or not this project is built. The question is, should there be dedicated, safe secure student housing around the perimeter of Carver.

A spokesman for the developer, Gilbane, speaks a few seconds over his limit only to be silenced by much scraping of throats from the occupiers. They have their own ways of enforcing the rules.

Long time resident, Pastor James Wilkins, says the question is not “why not build,” it is “why should we build.” It will result in a better Richmond, a better Marshall Street and a better Carver.

“Nobody complained when the area was full of drug dealers and thieves. VCU students are good for the neighborhood.”

10:40: By a 5 – 4 vote Council approved item 57, the redistricting proposal put forward by Charles Samuels, another feather in his cap. A lonely citizen speaks belatedly to an empty chamber, but it’s too late. The fat lady has already sung.