Last night’s city council meeting became a debate on two hot topics currently affecting the Richmond area: renovations of Monroe Park and the American Civil War Center’s attempts to sponsor a screening of the controversial film The Birth of a Nation.

Last night’s City Council meeting became a debate on two hot topics currently affecting the Richmond area. The long-discussed renovations of Monroe Park were heatedly disputed by community members and council members alike. Shortly thereafter, the American Civil War Center’s attempts to sponsor a screening of the controversial film Birth of a Nation brought up issues regarding freedom of speech.

After regular agenda items, payments of services owed, and position appointments were either approved or continued to future meetings, the public comment period opened up.

Jennifer Lawhorne from the campaign to Keep Monroe Park Open and Free approached the podium. She took issue with the Monroe Park renovation master plan in several areas.

After explaining the estimated cost of the first year of construction to be over $750,000 in the first year, and over $1 million by the fifth year, Lawhorne expressed fear that the public park’s overall expenditure would be inequitable to the rest of Richmond City Parks.

“The cost of maintaining Monroe Park should be equal to the cost of the rest of Richmond City Parks,” she said.

She also feared the use of private companies in the maintenance and security of the park.

“We are asking of any mention of privatization be removed from the plan, and the park remain under control of Richmond City.” 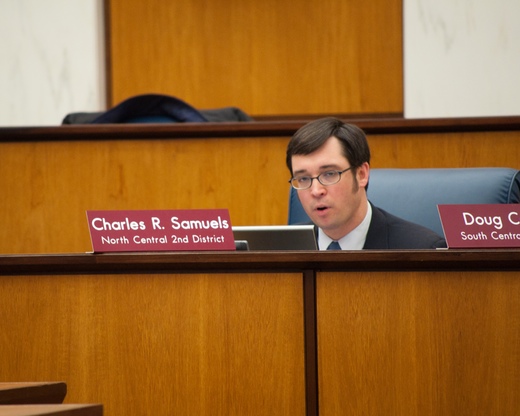 2nd District Councilman Charles Samuels (pictured above), who has taken much of the heat for the proposed renovations, spoke up in the plans defense. “There’s been a lot of confusion out there,” he said. “There will not be a private company running Monroe Park… The master plan recommends a non-profit conservancy, not unlike Maymont.”

He also stressed his commitment to listening to those concerned with the plan saying he was in contact with administration and advisory board folks to make sure he heard the unease. Finally, he looked toward City Council President Kathy Graziano and assured her, “At the end of the day, once you hear both sides of the story, I think it will be a little different than what you just heard tonight.” 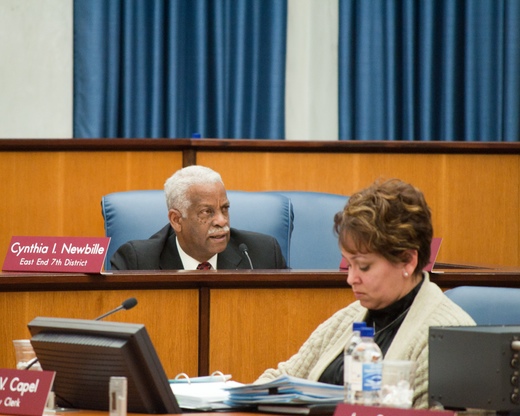 Speaking with 5th District Councilman Marty Jewell (pictured above) after the meeting presented a different view point from the council. “Monroe park is and has always been a public park, and it should remain a public park,” said Jewell, who has been seen attending some of the charity events held every Sunday in Monroe park. He said he sympathized with those involved in helping the homeless who come to Monroe Park for food and shelter.

“If you look at the master plan wordage from [the year] 2000, the language was there that we need to ‘reduce the visibility of homeless people,'” he said. “That’s always been the intent of certain corporate types who simply don’t want to see poor people.”

No part of the plan was to be voted on that night, so no issues concerning the park or the master plan were directly addressed in the meeting. 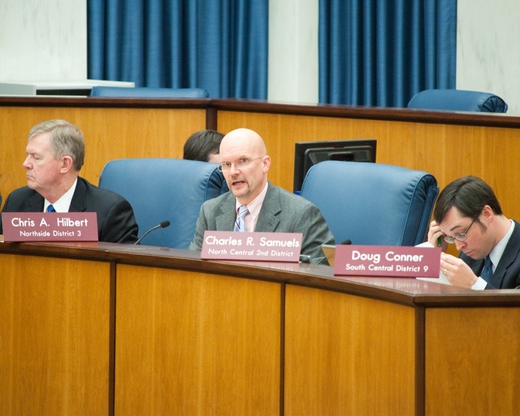 Soon after the Monroe Park conversation ended, 3rd District Councilman Chris Hilbert (pictured above) brought forth a resolution concerning the Richmond-based American Civil War Center’s attempt to sponsor a screening of the film Birth of a Nation.

The 1915 film based on the book The Clansman: An Historical Romance of the Ku Klux Klan by Thomas Dixon, is renowned in the film world for being one of the earliest examples of extensive film editing, as well as its use of grand cinematography to show a romantic view of the south during the Civil War. It also portrays the use of slaves and lynching as acceptable and common place. The Richmond Free Press brought the issue to light in an article earlier this week. Hilbert’s response came in the form of a resolution to “strongly discourage” the center from seeking additional sponsorship.

“If they want to show it there as historical fact, then that’s one thing, but to show this in a sponsored event and in a movie theater and get everyone to come out for it,” said Hilbert, “We need to move forward with our city.”

However, 1st District Councilman Bruce Tyler (pictured in the main image of this story) brought up the fact that it was not City Council’s job to be a censor.

“There is nothing in this film that I wanna see or have shown,” said Tyler, “But I have to sit here and say that freedom of speech is what makes our country great, and i don’t think its our right to censor freedom of speech.”

The resolution to discourage the organization from further pursuing the film’s screening was passed by a majority vote: Jewell, Graziano, Hilbert, Newbille, Robertson, and Connors voted yes; Tyler voted no; Samuels abstained; and Trammell was excused (not present for the vote).

(All photos by John Garcia)