If you thought that, after the last City Council meeting, things couldn’t get more rife with drama–you were WRONG! Things started out Easy Peasy, but then things…took a turn (HINT: think of the Elvis Presley song, the ‘BLANK-house Rock’).

I have a problem with the famous phrase by the philosopher Santayana which goes as follows: The one who does not remember history is bound to live through it again.

Well, I was at the mid-September council meeting, wrote 900 words about it, and remember it well—if not fondly—but still was condemned to repeat it. I’m becoming fatalistic about these things. No matter how optimistic things may appear, if you are in City Council chambers on a Monday night, things are bound to go wrong. I feel like I am in my own version of Groundhog Day, but there’s no Andie MacDowell to make things all better. It is hard to imagine a more arduous session than the last one, last night’s, however, put almost everyone over the edge.

The evening started out promising: the usual suspects were wandering around chambers. Self-proclaimed candidate for Sheriff, Chris Dorsey, was primed to make his candidacy public, a spectacle that included hand painted signs and a supporter. The Agenda looked very tame, just like last week. There were only three items on the Regular Agenda and they were all marked as either “Continue” or “Withdrawn”. Again, I had hopes for an early evening. A pleasant night of awards, Citizen Comment, and local color and I’d be outta here by 7:30pm. What I didn’t know (this time) was that there were two city jail related ordinances buried in the consent agenda (cue the violins from Psycho). Just when I thought it was safe to go back to City Council meetings…

Each meeting Council and sometimes the Mayor recognize deserving people in the city who go above and beyond to make this a better place to live. There’s no shortage of Good Samaritans, and this portion has become my favorite part of the night.

Up first were the heroes of Irene. Despite widespread damage, the Richmond Emergency Response Team worked night and day, often at the expense of helping their own families, to get services restored in less than a week. They got a round of applause and a signed award from both Council and the Mayor.

Next there was an award presented to the Richmond 4H clubs in honor of National 4H Week. Who knew Richmond even had a 4H program, but they assist, among other things, in children’s nutrition programs and urban gardening. Now they have a plaque to show for it.

The next honoree was Maymont, a city park run by a private foundation. The property was donated to the city 86 years ago by the Dooley family and is one of the largest draws in the city. Recently they hosted the Richmond Jazz Festival and the city wide cross country tournament. By at least one measure, Maymont is one of the top ten public spaces in the country. For all you do, Maymont, this award is for you.

Next up were the principal and staff of Fox Elementary, which is celebrating its 100th birthday. Anyone with school age kids in the city knows that Fox is one of the most coveted schools in the city. You might have your own favorite, but you and I both know that, when people lament the sad state of Richmond City Schools, they are not talking about Fox. One day, hopefully, schools like Fox Elementary will be the rule, not the exception. 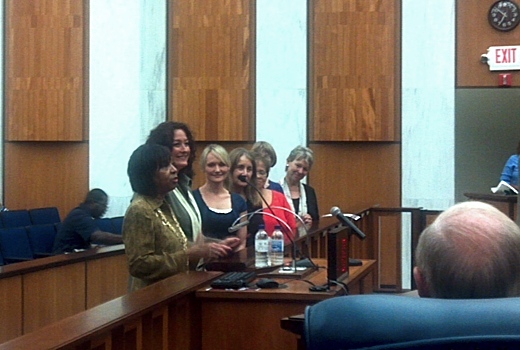 Last, but not least, Council recognized the service of Southside’s Sam and Penny Elians (sic). During the power outages caused by Irene, they scoured the city for excess food and set up tables on Jefferson Davis Highway, ensuring hundreds of people did not go hungry. Helping people is a way of life for this couple who feel it is a duty to share the blessings that they’ve been given. They are part of the invisible army that makes Richmond a rewarding place to live.

Now back to the less fun part of the agenda. Council quickly disposed of the Consent Agenda, but not before plucking out the two offending jail ordinances and putting them on the Regular Agenda. Little did I know that this would turn out to be rounds three and four for critics of Mayor Jones. While the Council seemed to give a 2nd and final endorsement to the City jail contract two weeks ago, there were two pieces of legislation needed to bring the contract back in compliance with the State of Virginia and ensure a 25% reimbursement of the cost, some $30 to $35 million dollars. The problem, first brought forward by Marty Jewell, was the miscalculation by City officials of how many beds were needed to meet Department of Corrections standards. City staff and Sheriff Woody told Council it had State approval when in fact they did not. Now the City is seeking waivers to cell size and amendments to their plan.

According to the City Administration, this is what had to happen last night. The Council needed to pass these to ordinances in order for the city to submit new plans to the Department of Corrections in time for their meeting on October 19th. This will keep the contract on schedule and presumably on budget.

Here’s what did happen: the first ordinance passed on a 5 to 4 vote along the familiar lines. Jewell, Tyler, Trammell and Samuels vote against and Robertson, Hilbert, Connor, Newbille and Graziano in favor. This vote took a full hour of discussion and drained almost everyone’s patience, patience that would soon be needed. So far, so good.

Discussion over the 2nd ordinance went on another hour with the Council seeming to ask the same questions over and over only to hear almost the same answer each time. The Council then voted down the amendments that had been approved in committee, amendments without which the ordinance no longer made sense. When motions were introduced to reconsider the whole matter, arguments broke out in the Council and in the chambers. It was clear everybody had enough and nothing more was going to pass tonight except another motion to reconsider and this passed unanimously. So, the ordinance has been put off until the October 10th meeting. Millions of dollars and the future of the contract are at stake. The one thing that has been preserved is the reputation of this city to botch big projects.

Then and only then did Mr. Dorsey get to make his big announcement.