City Council: a Landmark decision and the new arts district It’s the first Tuesday after the fourth Monday and I think the rare City Council meeting has thrown the regulars off. With the exception of the Thomas Jefferson High School basketball team and a baker’s dozen of EMTs, there’s nobody else here. It’s not that there’s nothing on the agenda, there’s just not much. As usual, out of 24 agenda items, ten are being continued. Still there are at least two hot button issues remaining: the final vote on the restoration of the Landmark Theater and the establishment of a Downtown arts district–something that has been around for more years than I can remember. If there’s something Richmond loves to fight about it’s support for the arts, especially big ticket items.

But let’s deal with the preliminaries first: awards and presentations.

The entire coaching staff and varsity basketball team of Thomas Jefferson High School are here to accept congratulations for winning the Colonial Tournament Championship. As usual, the Council gushes all over them. The team, on the other hand, is reluctant to take the microphone. Someone finally steps up and says, “Go Vikings.” They all march away with their tokens of appreciation.

Next up it is Richmond Emergency Medical Services (REMS) Week and a cadre of EMTs and their brass are here to represent them. Here are some REMS facts you might not know: In the past year, REMS handled 56,305 calls, 27,000 life-threatening situations, and revived 52 people without a heartbeat. I’ll have to keep that in mind the next time an ambulance screams by my window at 3 o’clock in the morning. 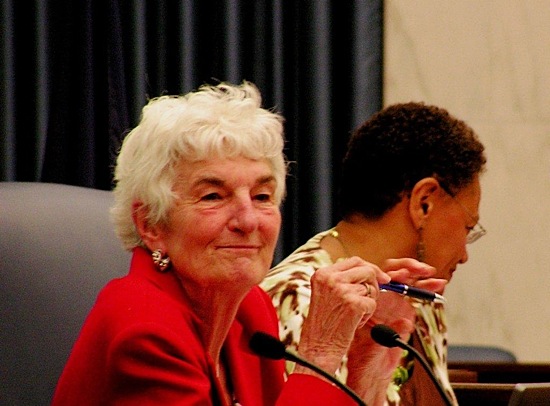 That’s it for the awards docket. We’re on to the Regular Session, at least after Kathy Graziano reads the riot act. “All citizen commenters WILL speak to the paper at hand and WILL NOT use inappropriate language or insult or slander anyone.” Since she’s speaking to a nearly empty room, it seems a bit overkill, but she’s got fire in her eyes and looks like she means business. I think she’s spotted outspoken citizen Chris Dorsey (who showed up late) in the audience.

First up for a vote is the renovation of the Landmark Theater. The aging facility is to be declared surplus property and leased to the CenterStage foundation for 40 years. In addition, the city will kick in $14 million from the Capital Improvement budget for renovations to be matched by $36 million in private donations and tax credits. Marty Jewell touts the theater as the only venue in the City this is actually making money and supports the measure. Chris Dorsey disagrees and promptly has his microphone shut off as he accuses the Council of taking kickbacks. Kathy Graziano is looking quite pleased with herself. After those brief fireworks, the measure is approved 8-0 (Doug Connor is absent tonight).

And finally there is the arts district. After long arguments over the shape, size, and scope of the district, a compromise has been agreed to. There will be two arts districts, a greater one encompassing most of downtown and a smaller one—a district within a district—that will focus on marketing on the West Broad Street galleries and restaurants that comprise the First Friday Art Walk. The consensus seems to be that even an imperfect arts district is better than no arts district at all, and it is time to get the ball rolling. Notably absent are any gallery owners or representatives of Curated Culture or the Downtown Neighborhood Association. However, Art180 is here and expresses enthusiasm for the district and touts their new youth art center coming soon to Jackson Ward. When everybody is done chipping in this also passes on an 8-0 vote.

Before the evening is over, not a single nay vote will be recorded. Other measures include: $45,000 to provide transportation to families of youth offenders that now reside in facilities scattered about the region since the closing of the Juvenile Detention Center and a $10 million loan pool from Housing and Urban Development to finance affordable housing, all approved with unanimous votes.

The evening wraps up with an amusing non sequitur by John Pierce. He compares random gunfire and gravity to unfair parking tickets. “It turns out” he says, “that gravity is not just a good idea. It’s the law.” He is angry that parking enforcement is randomly handing $200 tickets along Riverside Drive in Manchester for blocking curb cuts, pointing out that none of the thousands raised have gone towards no parking signs or painted curbs. In short, he “wants his money back.” Oh, well.

Regular business is over and it’s 8pm on the dot. Pretty good when you consider we didn’t get started till 6:30pm. If President Graziano had put a kill switch on Marty Jewell’s mike, we’d have been out of here by 7:30pm.