Beard Wars at the Valentine

Check out these beards.

As a man who has sported more than his fair share of facial hair I must doff my beard to this giants of the hair face follicle world.

With the rising popularity in facial hair, the Valentine has partnered with Terry Brown Photography and the RVA Beard League to present Beard Wars, on display on the First Floor of the Valentine, March 26-November 30, 2015. This photography exhibition faces off portraits of Civil War generals against those of League members.

“This exhibition is the Valentine’s way of paying homage to the sesquicentennial of the end of the American Civil War as we also identify the resurgence of the facial hair subculture in the Richmond area,” says Valentine Director Bill Martin.
The American Civil War (1861-1865) coincided with a rise in the popularity of men’s full facial hair during the mid-19th century. Contemporary photography captured men’s experimentation with an endless variety of styles, including mustaches, muttonchops, underbeards and sideburns.

Founded in 2011, the RVA Beard League is a collection of facial hair aficionados who are committed not simply to style but to community involvement. Not limited to men, the organization includes the RVA Beard League Whiskerinas, female members who create artificial beards. The League’s more than 200 members serve as “RVAmbassadors,” who volunteer widely in the city and compete nationally. Its annual Mid-Atlantic Beard and ‘Stache Championships is a popular showdown that benefits a local charity.

Complementing Beard Wars are shaving accessories and other objects from the Valentine collection. A mid-19th century taxidermied ram’s head snuff mull, or humidor, will greet visitors in the Klaus Lobby.

Beard Wars is made possible through the generous support of Tom and Wendy Rosenthal, with additional support by Richmond Camera.

The photos below are from behind the scenes showing a modern Shawn Morgan and a Civil War era Stonewall Jackson. 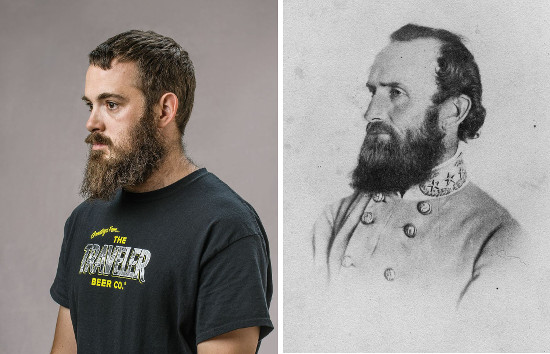