It was baseball night at City Hall. With nothing to legislate, the highlight of the night was the presence of two youth baseball teams rooted in the housing projects of Richmond. Other than an interesting withdrawn agenda item, the night was pretty tame.

It was baseball night at City Hall. With nothing to legislate, the highlight of the night was the presence of two youth baseball teams rooted in the housing projects of Richmond. Walking to City Hall tonight I was cautiously optimistic. Councilmembers, Hilbert and Samuels were out of town, and I had it on good authority it would be a short night. Barring a fist fight I’d be home for dinner.

With nothing on the regular agenda, Council President Graziano disposed of the Consent Agenda in less than five minutes. Everything after that was gravy with one sweet surprise at the end. For the record, here’s how Council spent your money tonight.

Ord. No. 2011-165: To amend City Code for the purpose of requiring that City agencies under the control or supervision of the Chief Administrative Officer to provide a written response to audit findings to audits by the City Auditor within ten working days of the issuance of such audit findings.

City Auditor, Umesh Dalal, has been a thorn in the side of two very different administrations. He’s a man who likes his work and does it well. I’m glad to see the Council standing behind him.

Ord. No. 2011-168: To authorize the Chief Administrative Officer to accept $375,400 from the Virginia Department of Transportation…for the purpose of funding the Pedestrian Countdown Indicators in Downtown Richmond Project.

Without checking, I think those are the crosswalk timers that tell you how long you have to get across the street. I use those to tell me how fast I have to drive to beat the light. You should be afraid.

Ord. No. 2011-169:
To authorize the Chief Administrative Officer to accept $1,337,399 from the Virginia Department of Transportation…for the purpose of funding Highway Safety Improvement Program traffic signal modernization projects…

The City accepted another $1,337,399 from VDOT, this time for traffic lights downtown. They don’t come with cameras so I’m for them.

Then there was this little tease that was withdrawn from the regular agenda.

Ord. No. 2011-160: (Patron: Mayor Jones) – To authorize the Chief Administrative Officer to execute a 2011 Memorandum of Understanding between the City of Richmond and the Richmond Metropolitan Authority for the purpose of accepting a prepayment amount of $60,333,919 in loans provided between 1975 and 1991. (WITHDRAWN)

We’ll discuss that at the appropriate time. So much for business, now for pleasure.

Tonight, kids from some of the toughest neighborhoods in the city got to tell a different story about life in the projects. They are the beneficiaries of a league born out of racism. The Metropolitan Junior Baseball League of Richmond was founded in 1966 to give inner city kids an opportunity to participate in our national pastime. Marty Jewell and Reva Trammel basked in their reflected glow as the Mosby Spartans and the Midlothian Nationals came down to thank the Council for their moral and financial support. Most recently they returned from Orlando where they participated in the Inner City Classic, full of memories Disney World. The season is over this year, but you’re all are invited to attend a game next year. They promise to put on a show. With any luck the Inner City Classic will return to Richmond and crown a local team as champ. Check http://www.mjbl.org/ to find out more.

This is going to be a short story today. I could tell you about the surprise hearing on our favorite family man, Sheriff Woody or how, an hour, later Councilwoman Trammel was still hawking smoke detectors, but that would detract from the feel good story of the night. It’s nice to know that some things never change and that some things still can.

Look for a big fight over the RMA deal and whether the Mayor will get his way. It is a narrowly split council still angry about the city jail fiasco. Bruce Tyler is still polishing his mayoral credentials and has a few more “I told you so’s” up his sleeve. Sheriff Woody looks ripe for future roasting, and the city jail story will keep returning like a bad penny. Also look for profiles on some of the local gadflies and how you can become one. Say what you will, they never get tired of themselves.

Till then enjoy this last shot of both baseball teams and my thanks to them for their gracious posing. 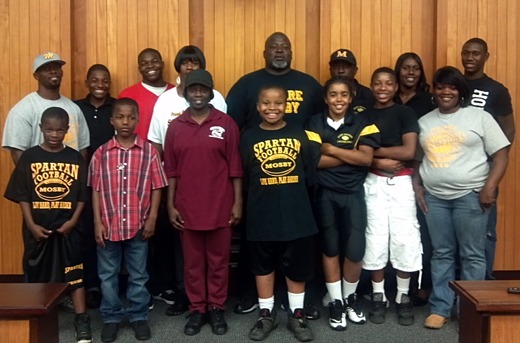 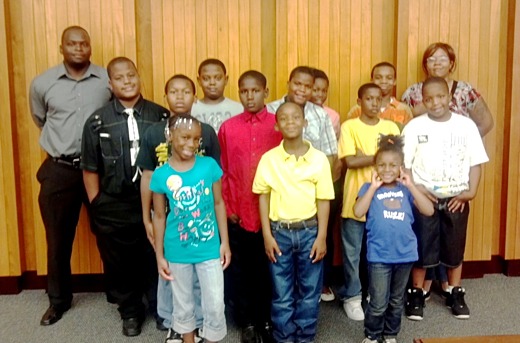