Barbershop boom in The Fan

Three businesses making barbering cool again and setting the stage for others. American barbershops were thriving in the early 1960s. Then John, Paul, George, and Ringo arrived.

“Barbershops were the only way for men [to get haircuts] from the early 1900s up to the 1950s and 60s,” explained David Foster, barber and co-owner of High Point Barbershop & Shave Parlor, scheduled to open in August in The Fan. “Then you had new trends come through that mostly started with the British Invasion with The Beatles…and all these guys wearing their hair kind of long, almost hippie length.”

Barbers thumbed their noises at the new Mop Top craze. “They did flattops and high-and-tights, and they only did these two things,” Foster said. “They never adapted to those new styles.”

Some shops endured, like Adams Barber Shop on W. Broad, which opened in 1958, but others faded like the sides of a classic high-and-tight. Later, people interested in styling hair as a profession trained to work in salons instead of barbershops. “There’s no money in barbershops,” Foster said of the mindset post-Beatles. “They’re not doing this new shit.”

Now the old-school is back in session. “Everything that’s cool goes in cycles. If it’s cool once, it’ll be cool again,” Foster said. Pompadours , slick backs, and Don Draper are now vogue. The old shit is new again. 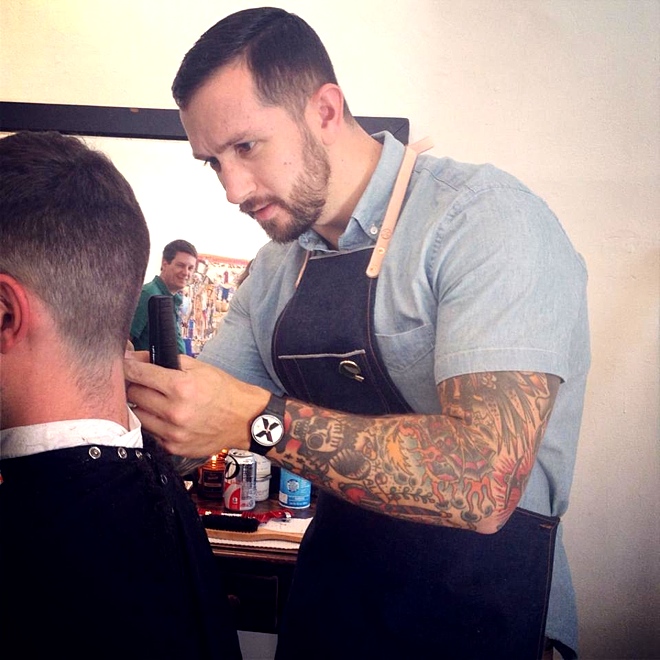 “Guys were like: ‘Wow. I can really get these tight, cool cuts but with style,'” Foster said. “And these salons don’t know how to do them because [the hairstyles] come from a barber background.”

Foster, 30, grew up with barbershops. “The things that I loved were the sound of the clippers and the smell of the after shave, the talc powder, the Playboy magazine that was stuck underneath the Sports Illustrated,” he said. “I always kind of felt like I was a bad kid for looking at them.”

He said barbershops are a “timeless” experience “that generations can hand down to one another.” But barbering wasn’t an attractive career in the 1990s and early 2000s. “I think a lot of guys that had an interest in it kind of developed this culture again [to] bring back the whole idea of a classic barber shop, but in a modern sense,”1 Foster said.

If all goes to plan, High Point will be a cut above the rest. “When GQ writes the article about Richmond being one of the coolest cities in America, we want them to highlight us,” he said. “We’re going to make it one of the coolest barbershops in the country.”

But when High Point opens next month, The Fan will have three barbershops within proximity to one another. Each is inspired by the barbershops of yore, but each does something different to collectively attract all walks of life.

Foster thinks that’s a good thing. “The thing that’s cool about barbershops is that you find someone or someplace that you feel comfortable with,” Foster said. “And it doesn’t matter what’s around you, if that’s your place, then that’s your place.”

Not just the cool parts

“I may be the only African-American female lesbian barbershop owner in the Commonwealth of Virginia,” says Dot Reid, owner of Refuge For Men at 1607 W. Main Street.

“I have folks that work down at [the Capitol], some of Richmond’s Top 10 city officials that come here and get their haircut. They’re a complete contrast to me,” said the former nursing instructor who is now 40 with lip piercings and over 100 tattoos. “But it’s not about the haircut. It’s about the experience. They don’t have to be Doctor, Lawyer, Surgeon. They can just be themselves. And I am just myself.”

Reid developed a predilection for cutting and shaving at an early age. “My mom used a straight razor to shave eyebrows,” the Richmond native said. Her mother designed clothes. Her grandmother was a florist. “So I watched them cut shapes and use scissors all my life.” 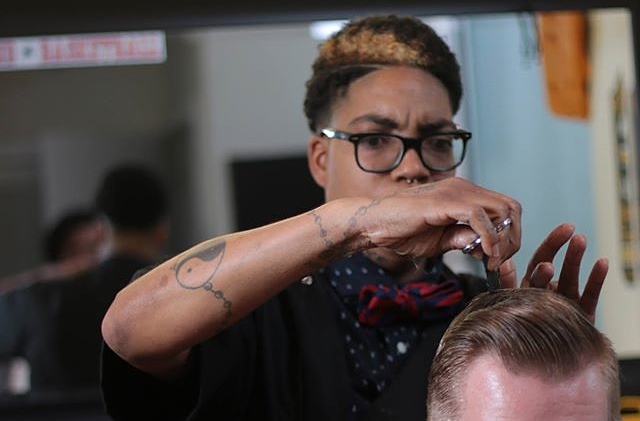 Reid attended nursing school in North Carolina. “I would go hang out at the barbershop when I was in college, and I found myself going twice a week,” she said. “I realized I wasn’t going for the haircut. I was going for the experience.”

Part of the experience was feeling connected. “I feel like that kept me in-the-know with what was going on in the community.” That wasn’t unique to that North Carolina barbershop. She said barbershops were known as “the connector in communities” in their heyday.

That heyday began to fade with the New York arrival of Pan Am flight 101 in February 1964. “There’s this old saying that four guys came across The Pond and changed the face of barbering. It was the Beatles,” she said. Soon after, barbershops tapered off. Then in the 1980s and 1990s, “the malls came out” and with them the Hair Cutterys, Sports Clips, and other discount salon chains. “You saw a dilution of the traditional barbershops,” she said.

Reid eventually gave up her nursing career, in which she’d been a teacher for five years, to open Refuge in 2009.

She’s still inspired by her old profession. “My healthcare background says to me: this is my opportunity to talk to you about why you should use conditioner when you wash your hair, what’s the difference in using the bar of soap that you use to wash your body with and what you wash your hair with. Because all of that ties into the haircut. If I can show you how to have healthy hair, maintain it, and style it according to your liking, that to me encompasses” a good experience.

Reid designed the interior of Refuge to uphold its name. There are two televisions glued to sports channels, a pool table, large fish tank, music on the stereo, and artwork. “All of your senses are engaged when you come here,” Reid said. “But they’re not engaged in a way where you have to work, more so you can relax.”

Refuge honors its Richmond community through various charitable events and programs. On Mondays when school is in session, Refuge hosts local high schoolers for a mentorship program. “We teach them hair cutting techniques, or maybe even just how to be a professional,” Reid said. “How to see other people they may not normally see in their community and interact with them.”

New to a new generation

“I knew I was a man when my dad took me to the barbershop and I sat down and the barber put the hot lather on my neck and shaved my neck,” said Sheila Connelly, co-owner of Main Street Barber & Mercantile, recalling the words of a recent customer.

A similar memory inspired her and partner Kevin Daley (both in their 50s) to open Main Street Barber just over a year ago.

While Connelly has been in the hairdressing business for over 25 years, Daley has done without the sheers and scissors.2 Instead he’s built a career designing retail spaces, including Ledbury‘s Shockoe store and Vans stores nationwide.

The pair began discussing plans to open their own barbershop a decade ago. When the two realized that the new wave of barbershops were about to crash onto Richmond they acted. “We didn’t do market research. We didn’t do anything,” Daley said. “We just knew we wanted to open a barbershop.”

Main Street Barber’s interior doesn’t shy away from its vintage homage: antique signs, radios, and other novelties create a retro feel. “I think we look like we’ve been here forever,” Daley said. When you step inside, one foot returns to the halcyon days of barbering. The other stands in modernity.

Part of Main Street Barber’s here-and-now quality is its clientele. “Traditionally, the barbershop has always been a welcoming place. But it’s typically been a welcoming place for similarities,” Daley said. “We’ve got gay, straight, African-American, Hispanic [customers]…we do so many different styles of hair cuts and so many different styles of people.”

That welcome extends to women. “Not all women like the big fancy salon experience,” Connelly said. She estimates that women make up 30 percent of her clientele. “They like that it’s laid back.” She said that master3 barbers Jerry Perdue4 and Charlie Ilario even get “young VCU girls” from time to time. “A lot of them are wearing that really short hair,” she said.

At $30 for women’s haircuts, Main Street Barber often beats salon prices. “We try to be that happy medium,” Connelly said. “We’re not Hair Cuttery. We’re not the high-end fancy salon.”

Unlike the aural sensations of Refuge, Main Street Barber has no TVs. “That’ll ruin everything,” Connelly said. “When it’s busy, a lot of people on the bench end up talking to each other…it’s pretty rare when someone comes in with a laptop and is not social.”

Daley believes the interpersonal quality of barbershops, and other local independent businesses like Shockoe Denim and coffee shops speak to a broader appreciation of artisan ways. “The barbershop, the jeans maker, the candle maker, the coffee shop, are all bringing it down to a personal level where we can all relate,” he said. “That’s why we’re excited about the [barbershop] trend happening. We’re excited about being part of that…resurgence.”

After all, barbering isn’t new. “But it’s new to a new generation.”

Connelly believes the uptick of barbershops exalts barbering as a profession. “It’s given it a real validity that it didn’t have before,” she said.

Daley speaks well of Dot Reid and the owners of High Point and is genuine when expressing eagerness for the latter to open. “We can’t wait for it to open,” he said. “Because it brings that much more recognition to what we’ve been in love with for so long.”