The Story of Virginia gets amplified at the VHS

After a $20 million renovation, the Virginia Historical Society’s newest exhibit makes local history more exciting and accessible for visitors of all ages. I first took my son to the Virginia Historical Society when he was five years old–so a little over two years ago. To be honest, the only reason I took him to the VHS was to avoid the constant “SHHHHHH”-ing a visit to the Virginia Museum of Fine Arts next door promised1. I “couldn’t even” that day, you could say.

We spent the bulk of our time there tooling around in the VHS’s long-running exhibit The Story of Virginia.We marveled at the size of the box Henry Brown used to mail himself to abolitionists in Philadelphia; I tried to explain the Civil War to him in terms he could somewhat understand; and he wore a tri-cornered hat and I donned a colonial bonnet so we could take the requisite selfie2. 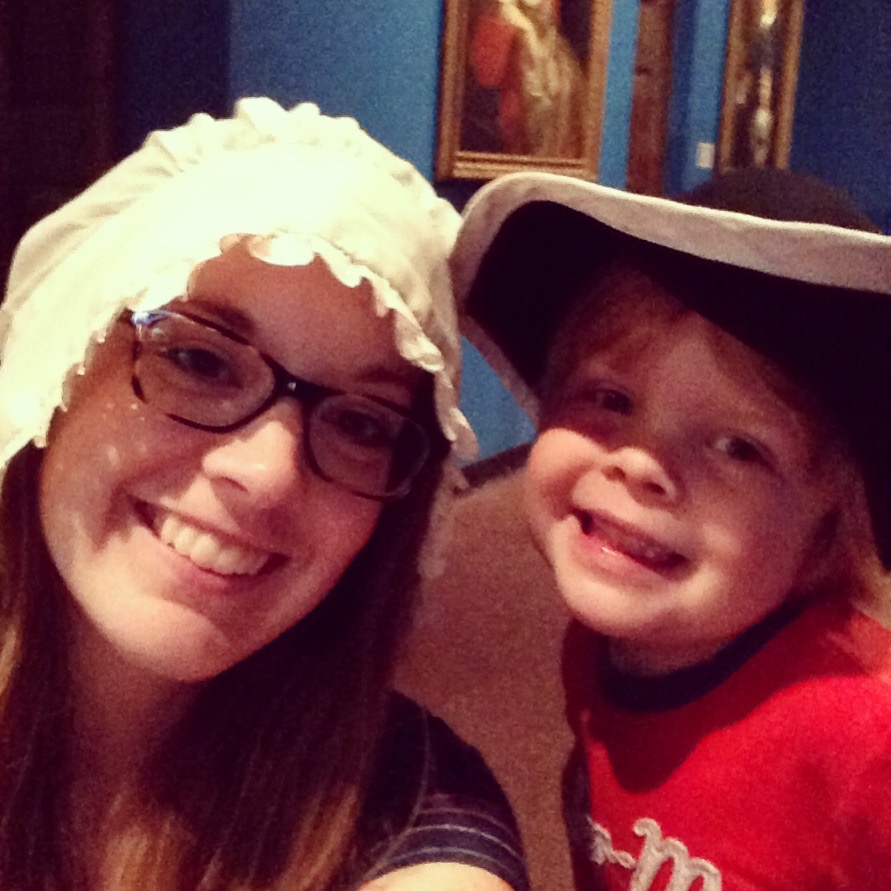 Please excuse this photo’s poor quality. It was taken two iPhones ago, in days of VHS yore.

We ended up having a great time, and my son repeatedly asked to go back to “the place with the hats and the weapons.” But because life happens, we didn’t make it over to the museum again (this time with one of his friends in tow) until several months after our initial visit–right smack in the middle of the VHS’s $38 million3 Story of Virginia Campaign and accompanying renovation, during which the exhibit was not open to the public.

And there was much woe.

Luckily, the gift shop was still open, so I was able to buy away the children’s tears with a little Civil War4 figurine and a book of paper dolls.

Despite this setback, my son remained faithful to the VHS and its offerings, pleading to go in every time we passed it on Boulevard. Every time. For over a year. So when I let him know it was time to make a return trip to The Story of Virginia, he gasped so excitedly you would’ve thought I told him Minecraft Steve was coming to live with us.

And I must say, I couldn’t help but join in on the gasping when we–him, me, and the same friend from our prior attempt5–made our way up to the second floor of the VHS and into the exhibit. I’ll say this: it was very much worth the wait.

Although The Story of Virginia‘s revamp officially began early last year, renovations had been on the minds of Virginia Historical Society staff members well before construction started.

“We began thinking about a re-imagined [Story of Virginia] about four years ago, and our first meetings on the subject were held in January 2012,” says Andrew Talkov, VHS’s Vice President for Programs. “The actual gallery space was closed for 18 months, beginning in 2014.”

“At the core of the new Story of Virginia is an idea. That idea is that Virginia is a unique place that, for more than four centuries, has been at the crossroads of American history,” explains Talkov. “The heart of the exhibition is a display of 34 objects that illustrate where American and Virginia history intersect. A visitor who only views these items will walk away with a good overview of key moments in Virginia history.”

But fear not, Museum Moseyers! Those of you hoping for more than a quick’n’dirty look at Virginia history have plenty to keep you busy.

“Surrounding the ‘Crossroads’ is a chronological narrative supported by more than 500 objects that allows those who want to to learn more to dig beneath the surface,” says Talkov. “We also wanted to make it easier for our visitors to find not only the elements that are important to the overall narrative, but to seek out stories that interest them most.”

Technology updates to the Story of Virginia make seeking out those stories that much easier. Instead of simply gazing at items placed behind glass, visitors can make use of the exhibit’s “Take a Closer Look” kiosks which offer details, images, and videos related to the objects on display.

“Digital imagery allows visitors to examine details of objects on-screen in a way that would be impossible if they just saw it in the gallery,” Talkov explains. “These kiosks also allowed us to reduce the visual distraction of dozens of individual labels with tiny copy in the exhibit cases and allows us to easily add to and update our interpretation of many objects in the exhibition as new information comes available.”

Other additions of the technological persuasion include an interactive game during which you can find out if you would’ve been a Federalist or an Anti-Federalist during the ratification of the Constitution, and an updated version of “Landscape Turned Red,” an audiovisual representation of Virginia-based Civil War Battles and the Union and Confederate regiments that participated in them.

While many items that appeared in the previous iteration of Story of Virginia remain in the exhibit, VHS curators “worked diligently to choose interesting objects that best supported the diverse story we hoped to tell,” as Talkov puts it. “Curating an exhibition is as much about deciding what to show as what not to show, and when you have more than 8.5 million items in your collection the process is as much about what to omit as it is about what to include.”

While some items from the original exhibit were put into storage or loaned out to other institutions, the VHS solicited donations of items and brought in pieces from its own collection that hadn’t yet been on long-term display.

Items from the VHS’s collection featured for the first time in the Story of Virginia include a purse owned by Martha Washington; a complete uniform worn by a solider in the 5th New York Infantry who died in Virginia; and the dress worn by prisoner of war activist Phyllis Galanti when she welcomed home her husband, Lt. Cmdr. Paul Galanti, after his seven-year imprisonment during the Vietnam War.

As far as those new-to-the-VHS readers, visitors can take a close look at a pair Gov. Douglas L. Wilder’s boots featuring the seal of the Commonwealth of Virginia; a suit, eyeglasses, and Harvard Law School Medal of Freedom belonging to Oliver Hill; taps and bottles from Virginia wineries and breweries; and even those bright red pants worn by Camille Rudney as she opposed anti-abortion legislation on the steps of the Virginia State Capitol in March of 2012.

Other highlights–particularly for the elementary school set–include the dugout canoe located right at the exhibit’s entrance; the electronic streetcar showcasing old-timey appliances (my young companions’ words, not mine); and, of course, this tomahawk.6

While the quiet-museum-stroll-enthusiast part of me would love to report that my son and his guest quietly tiptoed through the Story of Virginia, reverently soaking up every morsel of history offered, that was not the case. Really they were more like pinballs, catapulting from display to display, whisper-shouting (and sometimes regular-shouting) commentary at one another and pummeling me with questions. Which, in my opinion, is exactly what they should’ve been doing. They were excited. They were engaged. They learned things! And they liked it! In fact, my son liked The Story of Virginia so much he asked his grandparents to take him to see it again the very next day. If that’s not a bona fide, tiny nerd7 stamp of approval, I don’t know what is.

The Story of Virginia at the Virginia Historical Society is open seven days a week from 10:00 AM to 5:00 PM. Admission is free. Visit vahistorical.org for additional information about the exhibit, including videos and other educational resources.