What’s up with the smoke?

Most of Richmond was tweeting about the sudden smoke that filled the air beginning this evening, and by now many of you have also heard that the smoke is coming from a fire burning in Caroline County near Fort A. P. Hill. The big question, no doubt, is why did the smoke show up this evening?

Seems like most of Richmond was tweeting tonight about the sudden smoke that filled the air beginning this evening, and by now many of you have also heard that the smoke is coming from a fire burning in Caroline County near Fort A. P. Hill that started over the weekend.

The big question, no doubt, is why did the smoke show up this evening? Where has it been all weekend? 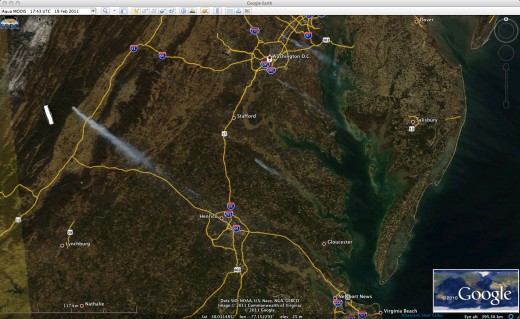 There’s been a pretty significant temperature gradient set up over Virginia today. At 1pm today there was a 30-degree difference between Dulles International Airport (39F) and Richmond International Airport (69F). Danville set a record high this afternoon of 75 degrees, while Dulles never made it past 40 today. In between the two, a frontal boundary set up; initially the boundary progressed north as a warm front, but over the last 8 hours, it began moving back south. At Shannon Airport just north of Fredericksburg, temperatures peaked at 65 during the 10 o’clock hour this morning. By 3pm, when RIC peaked at today’s high of 70, Shannon Airport was already down to 48 degrees and falling. 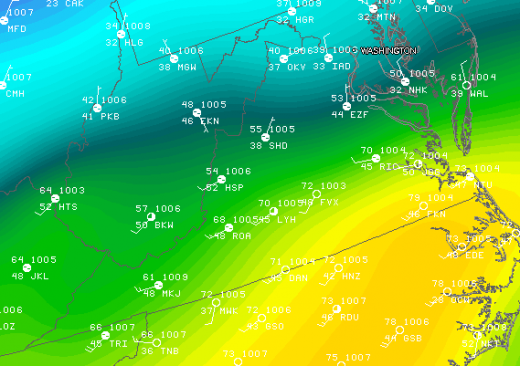 This afternoon's temperatures at 2pm. Note the direction of winds (indicated by the barb) at Richmond (RIC) compared to Shannon Airport (EZF) and Dulles (IAD). 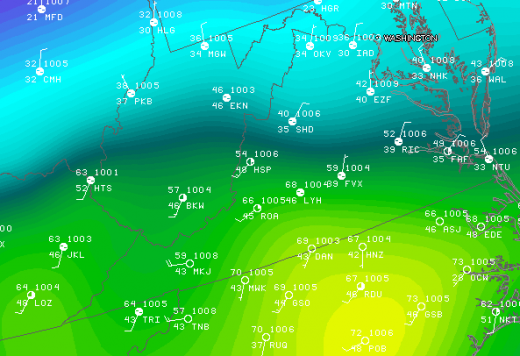 For comparison, temperatures at 6pm. Note the wind shift at RIC.

What was a warm front this morning had become a cold front, and it was moving south. The front was not just a boundary between airmasses of different temperatures; it also demarcated a significant shift in the winds. On the warm side of the boundary, the winds were coming at us out of the southwest and the west. When the front passed through the Richmond area around 3pm, the southwest winds that were bringing in smoke-free southern Appalachian air, were now northeast wind carrying smoke from fires in Caroline County and potentially points even farther north and east.

Unfortunately today’s excessive cloudcover prevented any satellite images like the one above of the smoke plumes today, but if one were to strip away all the other clouds, you’d find smoke streaming from the northeast toward Richmond.