Monday looks relatively quiet, while the atmosphere sets up for what is looking to be an ugly day on Tuesday. Snow, ice, and rain are all possible, and none will be any fun.

Happy Monday morning everyone! I’m sure you’re all excited to roll out of bed and start a new week!

What’s that? No, I’m pretty sure most of the actions you’ve just suggested are illegal in 37 states and the District of Columbia. Yes, I will shut up and just give you the [expletive deleted] forecast.

First things first: A Winter Weather Advisory is in effect from 4am Tuesday morning until midnight Tuesday night for the counties below shown in purple. 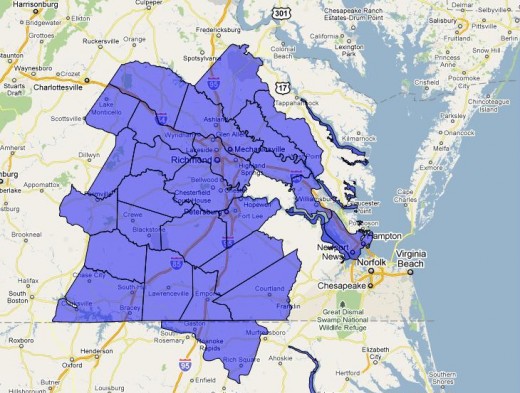 Monday is going to be the precursor to everything that I’ve talked about this weekend. Clouds are already over the area, well in advance of the system, which is just now beginning to drop snow over the Charlotte area. Snow totals across northern Alabama are in excess of 7” or more, virtually shutting down most of Alabama, Mississippi, and northern Georgia.

Somewhat related: meteorologist James Spann, from the ABC affiliate in Birmingham, Alabama, described this as the most unusual snow image of the night.

Somewhere I imagine this scene has been acted out multiple times in the past across Richmond.

As I was saying, for Monday, we’ve already got the clouds in place. They’ll continue to thicken as the day progresses, but as I mentioned in my weekend discussion, the air aloft is VERY dry, so don’t expect a lot in the way of precipitation until tonight at the earliest. It will take most of the day for the atmosphere to saturate from about 15,000 feet down. In fact, most of the overnight model runs are trying to saturate things too quickly, meaning that we may be looking at a bit more lag time in the precipitation starting.

If you’re looking at the radar today, what you’ll see is precipitation associated with a weakening low crossing the Gulf Coast states. Energy from this low will transition to a developing coastal low; it is the intensification of this coastal low that will be the cause for the precipitation we see in the River City. So, don’t get disappointed if you see a lot of the snow showers missing us today; it certainly doesn’t mean that we’ve missed out on the system entirely.

Temperatures today will climb into the mid 30s. Clouds will build in more during the day, and temperatures tonight will drop into the mid 20s. Precipitation will start somewhere around midnight; it could show up a few hours early if the column saturates more quickly (looking less likely at this point); what’s probably going to happen is that the first flakes will start falling in the early morning hours before sunrise.

It will start as snow, but during late Tuesday morning, we’ll see a transition to a snow/sleet mix with periods of straight sleet or freezing rain (and perhaps even some rain) mixed in. Highs Tuesday will creep to about 34 in the afternoon, before sliding back into the mid 20s once the sun goes down.

How much snow will we get? Right now I’m thinking we’ll pick up about two inches on the front side before the switch to ice, and then MAYBE another inch if temperatures aloft get cold enough to allow a switch back to snow in the evening hours before the snow tapers off Tuesday night. Remember – it’s not going to be the surface temperatures that will dictate how much of this precipitation will stay as snow, it will be the temperatures aloft. We had a similar situation occur in mid December. What was looking like a fairly potent storm system suffered from an infusion of warm air aloft, and what was hoped to be mostly snow turned out to be only light snow in places and sleet or freezing rain in others. The rule of thumb is that one can expect about ten inches of snow for every inch of liquid water equivalent in the atmosphere; for every tenth of an inch that falls tomorrow as something other than snow, that’s an inch of snow lost from the final total. It won’t take a lot of warm air to depress snow totals.

Because of the near-freezing temperatures, what snow we do see will be of the heavy, wet variety. Great for snowballs and snow men, but not great if you’re planning on driving anywhere. Anything that falls as liquid during the day on Tuesday will freeze Tuesday night, making travel that much more treacherous. Be careful if you have to go out on Tuesday.

The system will move off to the northeast on Tuesday evening, and the sleet/freezing rain mix may transition back into a period of snow before we’re all done. Like I said earlier, it may mean that we see up to an additional inch of snow; however, considering the state of surfaces at that point, I doubt there will be much actual accumulation.

As the system moves out of the area, we’ll see winds pick up for a period. Clouds will decrease, and Wednesday looks to be party sunny with a little bit of warming and highs in the low 40s. However, strong, gusty winds will make it feel quite a bit colder than it actually is. Taking wind chill into account, the high temperature may feel more like 30 than 40.

If you’ve got snow pictures or reports, please post them in the comments or send them along to me at dan@rvanews.com and I’ll be glad to post them on your behalf. I’ll have my next forecast update on Thursday, and I’ll be sure to post updates as conditions warrant.